Aleppo is not the only place where civilians are being killed, but it is a province where all the different sides of the conflict exist in the same area. 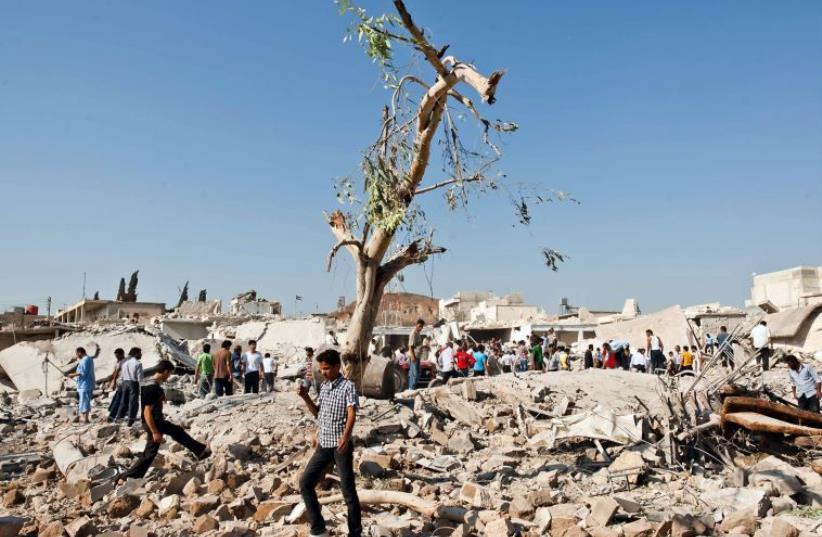 Syrians inspect the scene following an airstrick by regine forces on the town of Azaz, near the northern restive Syrian city of Aleppo, on August 15, 2012.
(photo credit: VEDAT XHYMSHITI / AFP)
Advertisement
Aleppo, Syria’s second largest city, has been the center of the Syrian conflict due to its economic and geographic importance. It is this importance that has caused the regime of Bashar Assad and its allies to mobilize all their power to attack the city and reconquer areas controlled by the rebels, using any means possible. After 10 days of heavy bombardment, Syrians in the city are saying to the world “save Aleppo.”The regime and its allies have encouraged the Russian intervention which contributed to the shelling of Aleppo and other cities, causing a death toll of over 1,000 civilians in six months. After the Russian announcement of partial withdrawal from Syria, a fragile cease-fire that began on February 27 and lasted for a month. After that Russia gave the green light to the regime to get back to its old notorious tactic of indiscriminate destruction, and this is exactly what has been happening in Aleppo in the past month.Aleppo has recently seen the worst shelling since the conflict began, this in a city where two-thirds of the population were displaced during four years of constant shelling. When I was there we experienced bombardment daily. An organization led by Syrian volunteer activists called The Syrian Institute for Justice publishes statistics on aerial bombardment of Aleppo during April 2016. It found there were 270 barrel bombs dropped from helicopters; 907 air-to-ground missiles fired; one missile suspected to contain chemical warheads; five longrange surface-to-surface missiles; 63 short-range surface- to-surface missiles; six phosphorous bombs and three cluster bombs.In terms of casualties, its tally was 347 children, 76 women, 38 armed fighters, 12 civil defense members, five doctors and nurses, seven humanitarian aid workers and one member of the civil service. These numbers show clearly the volume of attacks on Aleppo. Activists call it a “war of attrition” against the civilian population, aimed at forcing them to flee Aleppo, with the sight of daily massacres also being intended to demoralize opposition fighters.With world awareness increasing regarding Aleppo, the regime employs the excuse that it is shelling the Nusra Front, even though the city is almost entirely free of Nusra control. Nusra is one of the groups not included in the cease-fire. The regime also tries to blame Sunni opposition groups for shelling other Sunni opposition groups, which is unlikely.Aleppo is not the only place where civilians are being killed, but it is a province where all the different sides of the conflict exist in the same area. There is the Syrian regime, Shi’ite militias, the Iranian army, Islamic State (ISIS), Nusra Front and the Syrian rebels.Battles are going on all day. Opposition forces fight the regime, which is supported by Iranian forces and Shi’ite militias, who in turn have Russian air support in south and north Aleppo. The Syrian rebel forces are also fighting the Kurdish PYD forces and their allies who are also coordinating with and supported by Russia inside Aleppo. In addition the regime and the PYD and opposition forces all fight ISIS in the northeast countryside. The US-backed coalition, which is fighting ISIS, provides shamefully weak support for a political solution in Syria. Their concept is a solution in Syria that doesn’t involve ISIS. The truce agreed by US Secretary of State John Kerry and Russian Foreign Minister Sergey Lavrov regarding Aleppo on Wednesday will likely meet the same fate as the old cease-fire, as the front line is too complicated and there is an inability to monitor it and record each violation.Regarding the military situation it is clear that the reality in Syria is that the borders of each actor’s areas of influence have been drawn over the past few months and no side can achieve any remarkable progress. The supporters of the Syrian opposition need better weapons to be able to topple the regime.Most of the opposition rebel groups cannot undertake any military operation without the permission of their backers in Turkey or Saudi Arabia, which threaten to cut the supply of arms if they do so. As an example, opposition forces progressed on Tuesday into West Aleppo and conquered two important buildings which would help their advance into the center of the city. Yesterday Russia and the US agreed on the truce and an order came immediately from the US, Turkey and Saudi to the opposition to withdraw.The opposition derisively refer to this “support” as “Mom” telling them what to do.Outside of Aleppo the regime is still shelling from time to time, and civilians die. Two weeks ago regime jets struck an area in southern Idlib and at least 40 civilians were killed. ISIS is still strong in Syria, and holds the most important petrol and oil sources in the country. Just two days ago it took the Shaer gas field from the regime in the eastern part of the countryside of Homs, even though the regime had seized Palmyra a month ago and was supposed to be progressing against ISIS. It illustrates that ISIS very much benefits from the conflict in Syria and nobody should expect the organization to be defeated without a complete mobilization by all sides in Syria, and this is impossible now and in the near future.The author is a Syrian journalist who was in Aleppo and at the front line throughout the past week.