Dagan was probably a more controversial figure once he retired from the Mossad than while in public service. 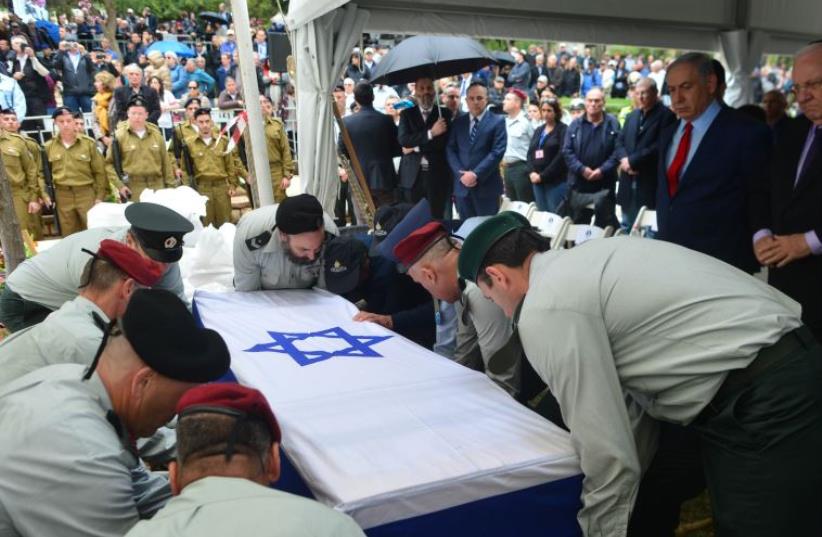 Prime Minister Benjamin Netanyahu and President Reuven Rivlin watch as Meir Dagan is laid to rest in Rosh Pina, Sunday March 20.
(photo credit: KOBI GIDON / GPO)
Advertisement
I had the privilege of attending the funeral on Sunday of Meir Dagan, the legendary director of the Mossad from 2003- 2011, a highly decorated former general in the IDF and a long-time resident, and resident “celebrity,” of our little town of Rosh Pina. Dagan succumbed to a long battle with liver cancer at the age of 71.The funeral was held in Rosh Pina’s military cemetery, a stone’s throw (downhill) from Dagan’s house.Dagan was probably a more controversial figure once he retired from the Mossad than while in public service, as he was vociferous against the idea of any attack on Iranian nuclear facilities, and was equally vocal in support of the Iranian deal negotiated by the US administration.As someone who spent his term as director largely focused on thwarting Iranian progress to a nuke, and who was considered to be the pre-eminent expert on the status of Iran’s nuclearization efforts, his voice was hard to dismiss.While some saw in his recent viewpoints the beginnings of a political career, it was not to be as he was beset with the health issues that ultimately claimed him.I mention all of this because what was remarkable about his funeral was the unanimity of praise and affection that was bestowed upon him from the highest levels of the government regardless of policy differences.State funerals are typically held at Mount Herzl in Jerusalem, the resting place of many of Israel’s leaders, military figures and leading lights. But in Dagan’s case, the assembled governmental elite made their way up to remote Rosh Pina and gave him a stately and highly reverent farewell.Present were Prime Minister Benjamin Netanyahu, President Reuven Rivlin, former president Shimon Peres, Defense Minister Moshe Ya’alon, IDF Chief of Staff Gadi Eizenkot and the current director of the Mossad, Yossi Cohen, all of whom spoke except for Ya’alon.As often happens when a strong, unmistakable personality passes, every speaker managed to say much the same things about Dagan, each in his own way.What came through with great clarity was Dagan’s devotion to the protection of the Jewish people and the State of Israel.This was not his job, nor his responsibility; this was his DNA, his essence, instilled in him from birth on a train in Poland at the very end of WWII.President Rivlin mentioned the oft-cited photo in Dagan’s office of his grandfather in the Lukow ghetto, wrapped in a tallit, kneeling with his hands raised before Nazis, moments before he was executed.This searing photographic reality was the backdrop for Dagan’s world view.We live in a world with a culture that likes to explore, some would say obsess, over groups like the Mossad as being dark and sinister and all-controlling from the shadows.The puppetmasters of such groups have nefarious goals, frightening objectives and are completely amoral in their willingness to accomplish what they seek.How different was the reality, at least as concerns the Mossad and its storied leader.Speaker after speaker extolled Dagan’s selflessness, his non-interest in glory, wealth or fame, but rather his overriding drive to keep faith with his ancestors by never allowing what happened to them to befall their descendants.In a world where people reflexively proclaim “Never Again,” Dagan walked the walk of making sure that it remained a reality.This was the power of the ceremony, the overriding sense of gratitude to someone who so clearly saw the need, the justice, the imperative of protecting the Jewish people and the State of Israel. On this matter, there was no ambiguity, no nuance, no moral equivalences or equivocation. We, the Jewish people, the State of Israel, deserved to hold our heads up high, to live in a world of our own freedom, self-determination and security. These were not points to negotiate; they were inalienable rights.I felt very proud yesterday to have had a Meir Dagan among us, and I felt very proud that the leadership of my country knew how important the service that he provided to us was.At a time when the world increasingly feels like it is upside down, inside out, or just plain wrong, yesterday’s loving farewell to Meir Dagan was a needed tonic, an important reminder of who we really are, and what we are ultimately about.The author is an executive board member of Im Tirtzu as well as a director of the Israel Independence Fund. He and his family made aliya from Westchester County, New York, in 2009.