Concerning Islamic State, Peres said that wars don’t bring victories, but only tombs. “Terrorism is more on the Arab side than on ours. 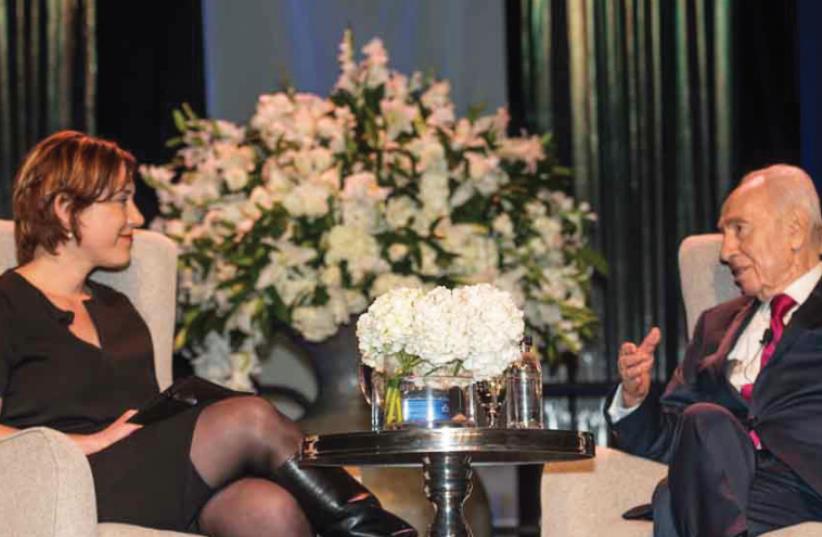 SHIMON PERES is interviewed in Johannesburg by journalist Paula Slier.
(photo credit: JULIAN POKROY)
Advertisement
JOHANNESBURG – “Arrest Peres,” was the strident cry of the Muslim Judicial Association of South Africa, “when he steps off the plane on arrival in Johannesburg.”The Boycott, Divestment and Sanctions (BDS) movement called for “the urgent arrest of Peres who is meddling in our judicial system.”Shimon Peres was invited to Johannesburg, South Africa by the Jewish community for the weekend starting February 26. The Israel United Appeal and The United Communal Fund issued the invitation for Peres to come and address the community.Locally, there were two concerns.He had just come out of hospital after heart problems – would Peres, age 92, stand up to two long plane flights within four days? Second, would his visit provoke protests and demonstrations? As it turned out, both concerns were groundless. The event went off without a hitch.The Sandton Convention Centre was full with 1,500 people seated one hour before starting time. There was a buzz of excitement and expectation. They were entertained by African dancers and songs in the vernacular and also Hebrew.Then Peres came in. Everyone stood, clapped and cheered.This was followed by an excellent television account on two massive screens of Peres’s life story.After that, the Israeli ambassador to South Africa, Arthur Lenk, welcomed Peres to this country. Lenk commented that Israel and Africa were neighbors and friends. In fact the president of Kenya had just visited Israel. The ambassador asked Peres to come on stage, where he was seated in a comfortable armchair, ready to be interviewed.Peres opened by saying that the basis of Jewish life is moral.“We were once the most lonely people in the world, but we still paid attention to the poor, the stranger and those who were alone. We have always been against slavery,” he said.When asked about the growing isolation of Israel, Peres pointed out that on the contrary, Israel was now cooperating with China on modern agricultural issues among others. “Similarly, with India,” he said, “we are very friendly. Both have great populations. Isolation?” Peres said that the new pope was a friend of Israel and was on record as stating that the Jews were not responsible for the death of Jesus. Peres then spoke about Nelson Mandela, the first president of “the free South Africa.”“He was a very unique man.He spent many years in prison but when he became president he set up The Truth and Reconciliation Commission where people who had committed illegal acts could come and admit what they had done and be able to apologize.This had never before been done in history. Mandela put an end to the past. In each person there is a small Mandela.”Asked about the BDS movement against Israel, Peres replied, “There are gaps in their ignorance. Scholars who support this should go back to school.”When asked about whether Israel was an “apartheid state” Peres said, “Apartheid was established by law and there is no law like that in Israel. Racism in Israel is a crime. You cannot be a Jew if you support apartheid.”Asked about the current violence in Israel, Peres said that it was the young people who were protesting. “But there are 11,000 Palestinian children in our hospitals. Science and education could be the cure. The greatest thing in life is to serve others. We were born to be friends.”Questioned about Iran being the main threat to Israel, Peres said that the Iranians can change their minds.“If there was a signed agreement, good things can come out. Young people, especially women, want a better life; their children are the victims now.”Concerning Islamic State, Peres said that wars don’t bring victories, but only tombs. “Terrorism is more on the Arab side than on ours.Killing their own people leads them nowhere. The future does not belong to those who kill. They are in a land that is unconquerable. The future does not belong to those who kill. Optimists and pessimists pass away the same way, so don’t be a pessimist. Let us make the world better, starting with technology. Israel started with nothing, but it had the greatest gift – human resources. The wisest thing is to be honest and to invest in friendship.”Peres ended with, “I want to say how much I appreciate being here tonight,” and received prolonged applause.After the meeting, a black friend of mine, David Mabula, came up to me and said, “I saw a white Mandela here tonight.”