Should Israel become a Nordic country?

However, to the surprise of many on the economic Right, the proponents of big government seem undeterred by these examples. 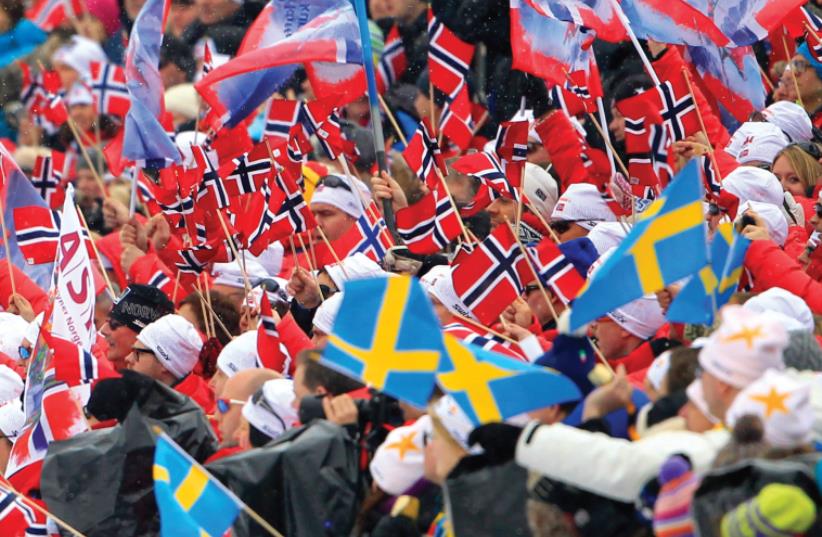 Norway, sweden, nordic flags
(photo credit: REUTERS)
Advertisement
While most Israelis would be loath to give up the sunshine, there are presumably many that would like to see Israel become a Nordic country in terms of social and economic organization. The notion that Israel would do well to adopt the “Nordic model” often comes up in debates about small vs big government. But is the Nordic model really all it’s cracked up to be? Two recent books by Swedish author Nima Sanandaji just might shake the beliefs of the big government faithful.In discussions on the relative merits of bottom-up vs top-down control, the defenders of small government can confidently point to the historical contrast between Hong Kong, Taiwan and mainland China, West Germany and East Germany, and South Korea and North Korea. The obvious differences in economic and political freedom between these countries offer strong evidence on the pitfalls of big government. The complete breakdown of the Soviet Union and Eastern Bloc in the late 1980s allows the small government types to rest their case.However, to the surprise of many on the economic Right, the proponents of big government seem undeterred by these examples. They simply see them as “historical hiccups.” All one needs to do is look way up north for more inspiration.The Nordic countries of Denmark, Finland, Norway, Iceland, Greenland, Faroe Islands and Sweden all have large public sectors, and they consistently score highly on measures of economic prosperity and life satisfaction.This is where Nima Sanandaji’s recent publications jump into the fray. Sanandaji offers a fresh, nuanced perspective on the Nordic model that may leave many on the economic Left rather frustrated.In his book Scandanavian Unexceptionalism, Sanandaji makes several important observations that are rarely acknowledged in popular discussions. He notes that Nordic economies actually contain a great deal of bottom-up, decentralized decision-making, despite their relatively heavy tax burdens and large public outlays.If one looks more closely at the facts in Nordic countries, it emerges that these countries have relatively few regulatory obstacles to starting a business, very little product market regulation, a high proportion of children attending private schools, widespread school choice and tuition voucher programs, and substantial private sector delivery of public welfare services. Thus, the typically large Nordic public sector does not at all correspond to a top-down, big-government form of economic organization. In many ways, Nordic economies are more liberalized than in the United States.Sanandaji further argues that even before the transition to large welfare states in the mid-1980s people in Nordic countries enjoyed relatively high living standards, less income inequality, and longevity. High levels of success were maintained after the transition due to retention of a large dose of decentralized decision-making, and unique norms of behavior that greatly encourage productivity and social cohesion. Nonetheless, the data do clearly show that Nordic economic growth suffered after the transition and measures of social flourishing displayed significant declines.In Sanandaji’s soon-to-be-released follow- up book, The Nordic Gender Equality Paradox, he further debunks the popular myth that big-government Nordic countries seem to have it all, including impressive levels of gender equality.Despite generous support for working parents and high rates of female labor force participation, Nordic countries score very poorly in international rankings that tally the number of women among senior managers and business owners. The share of female directors and chief executives is only 13 percent in the Nordics. The share is roughly 32% in Central Europe and the UK. Israel has a similarly dismal record as in the Nordics with women making up only 14% of top executives.In response to the severe under-representation of women on corporate boards, many governments around the world, including Israel, are hotly debating the imposition of quotas following the lead of Norway. Norway’s gender quotas for corporate boards are seen by many as the ideal top-down solution.Sanandaji bursts this bubble as well. He cites recent research that shows Norway’s gender quotas have been anything but a success.AS QUOTAS were introduced in Norway, firm performance deteriorated because less experienced people were fast-tracked or recruited externally to boards in order to meet the quotas. In addition, after the imposition of the quotas, there was no discernible effect on the gender wage gap in Norway. The quotas merely benefited a small group of women without having any wider beneficial ripple effects throughout the economy.So why do Nordic societies have so few women scaling the heights of the business world? Sanandaji surmises that the more severe top-down controls are responsible. He makes bold and politically incorrect claims that hold lots of merit, i.e., women are being harmed by the existence of public sector monopolies, high income tax rates and overly generous welfare state policies such as parental leave.Public sector monopolies hurt the economic advancement of women because it is difficult for more productive individuals to move up the ranks in these structures.Females are over-represented in the public sector in Nordic countries (at a similar rate as in Israel) and the flat wage profiles and lack of competitive pressures discourage work effort. High income tax rates have a similar discouraging effect in both the public and private sectors.Generous parental leave policies also encourage women to stay at home, leading to depreciation of labor market skills that harms future employability and a successful climb up the corporate ladder.Sanandaji concludes that Nordic attitudes toward gender roles, rooted in the Viking era, deserve to be admired by the rest of the world. However, if it is not combined with a more free-market approach, it will become increasingly difficult for Nordic countries to truly blossom and correct remaining gender disparities. The Israeli public, and especially its policymakers, could learn much from Sanandaji’s analysis of the Nordic model. The main lesson is that further liberalization and smaller government is the most fruitful approach for social and economic progress in the 21st century, without exception.The author is professor of economics at the University of London, Royal Holloway College, and president of the Jerusalem Institute for Market Studies.