As human beings we need to take care of our physical needs. That is how G-d has created us. 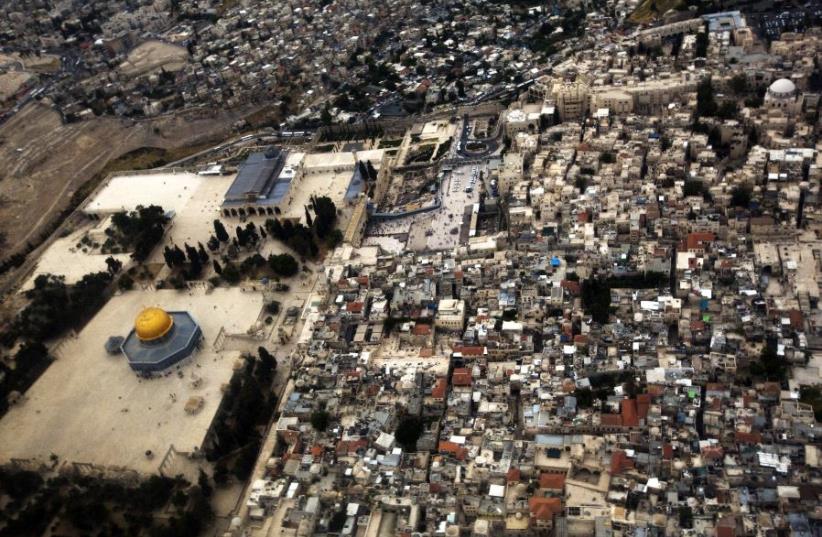 A general view shows Jerusalem's old city from an Israeli Air Force plane during an aerial show as part of celebrations for Israel's Independence Day to mark the 66th anniversary of the creation of the state, May 6, 2014
(photo credit: REUTERS)
Advertisement
Prime Minister Netanyahu’s recent travels to Africa, Australia, the United States and China, and the reception he received in these countries, are but the latest example of the centrality and importance of Israel in world affairs. This is remarkable. Given its tiny land area and population, Israel should be nothing more than a blip on the world’s radar.And yet it dominates attention everywhere; sometimes positively and sometimes, such as at the United Nations, negatively. Either way, its impact is completely disproportionate to its size. But this is how it’s always been in Jewish history – we Jews are a tiny people with an enormous impact. And this is how it was always meant to be.“Not because you are the biggest of the nations did G-d desire you and choose you but because you are the smallest of the nations,” says the Torah (Deuteronomy 7:7). In this crucial verse two very important things emerge.First, that by definition the Jewish people would be amongst the smallest of the nations; a bold prediction, which has, astoundingly, been fulfilled. And second, that this goes to the heart of Jewish identity and destiny. Rashi, in his commentary, interprets the verse to mean that the very smallness of the Jewish people is crucial to our link to G-d. But this is puzzling. Why should smallness be so defining? One dimension of the answer, perhaps, lies in the message of the miraculous nature of Jewish history. Given such small numbers, the Jewish people should, according to the normal laws of history, have disappeared by now through persecution or assimilation. For such a tiny nation not only to survive but to thrive and have an impact so disproportionate to its numbers makes its very existence a living testimony to G-d’s existence. The story of Jewish history has been a story of miracles and wonder; a story of survival against all the odds; and a story of inordinate success against rational predictions. The modern State of Israel is the latest remarkable example of how small numbers have overcome large odds to be world-beaters in so many areas, such as technology, military might, agriculture and medicine. In general, the disproportionate Jewish contribution to all spheres of human endeavor is so remarkable that it is reflective of its supernatural Divine character. To take poetic license and borrow from Winston Churchill, “Never before... has so much been owed by so many to so few.”The message carried with pride and conviction by the Jewish people and its small numbers is that this physical world is subject to the authority of the King of all Kings, G-d Himself, who guides and directs the affairs of mankind; through His Divine intervention time and again Jews have defied all the laws of history. This is a reminder to the world of the existence of one Almighty Creator, who is the Master of the universe and who is interested in the affairs of human beings and is the guiding force of human history. The Jewish mission is to carry this message, and we do so by our very existence.There is perhaps another message in this unusual phenomenon of the smallness in number of the Jewish people. It is a message of the triumph of quality over quantity, of spiritual over material. It is an eloquent declaration that we should not measure things in this world only in material terms, that the spiritual is much greater than the physical, and that the power of the human soul is greater than that of the human body, and the power of spiritual and intellectual creativity is greater than any force in the physical world. Jewish history preaches this lesson and teaches us the emptiness of the sole pursuit of materialism, the emptiness of a world measured by things alone, the emptiness of a world which is purely physical.When G-d created the first human beings, Adam and Eve, He used two substances – the dust of the earth and the spirit of G-d; that is body and soul. One of the most central teachings of Judaism and of the Jewish people is that the spirit, the soul, which is in every human being, is immortal and is far greater than the body. This lesson is taught by the pages of Jewish history, which recount how a nation small in physical numbers, but great in the spirit, has achieved so much. The small numbers of a mighty Jewish nation making a huge impact in world history is a reminder of the power of the spirit, of the neshama, the soul, and its importance, and the fact that it lies at the heart of human existence.It is also a reminder that as human beings we will only be truly uplifted and satisfied, and only find true happiness, when we connect to the neshama, the soul. The Vilna Gaon, in a letter to his family, compares the pursuit of materialism to drinking salt water – the more you drink the thirstier you become. Pursuit of physicality and materialism, while necessary for the human condition, is not sufficient.As human beings we need to take care of our physical needs. That is how G-d has created us.But fulfilling those needs is just the beginning and not the end goal, not the purpose of life.The purpose of life is to connect to G-d and live with the spiritual power of mitzvot. A life of materialism only is ultimately as deeply unsatisfying as salt water. And people today are thirsty for spiritual connection. They are thirsty for a life of meaning. And Jewish destiny teaches the secret of quenching that thirst.Warren Goldstein is the chief rabbi of South Africa.