Social media in the service of terrorists 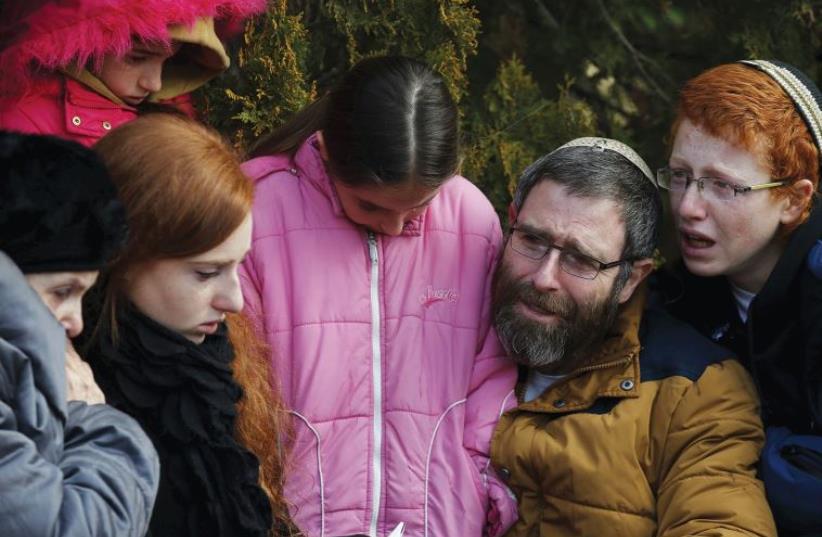 THE FAMILY of the late Dafna Meir mourn during her funeral ceremony in January.
(photo credit: REUTERS)
Advertisement
The unspeakable has happened again. Forty-nine people gunned down in a Florida nightclub, dozens more wounded – and all for the “crime” of enjoying a night on the town. As we mourn the senseless loss of these innocent lives, we must heed the warning implicit in President Obama’s message that the perpetrator of this slaughter was apparently inspired by extremist content disseminated over the Internet.Make no mistake about it: Words kill. Today, the virtual reality of cyberspace, in which words and images are spread at the speed of light, is leaving its tangible and tragic imprint on democratic societies from the US to Europe to Israel. The information revolution has brought tremendous benefits, but has also given new tools to those looking to incite violence and hate. In this era of rapidly developing technology, we must ensure that our legal systems and regulatory frameworks keep pace. Cyberspace must not become the Wild West.As citizens of democracies, we hold our basic freedoms dear. Our fundamental right to express ourselves freely is enshrined in law. However, we cannot remain complacent in the face of deadly threats which deliberately exploit our best intentions of tolerance and inclusiveness.Recent months have seen continued terrorism, with a spate of attacks sowing carnage on almost every continent. Cruising through cyberspace, impressionable youth are exposed to hate speech, racism, and incitement to violence and terrorism. Terrorist organizations make use of social media channels to recruit and radicalize. ISIS and al-Qaida are only two beneficiaries of this free-for-all.Our reflexive reluctance to restrict the scope of legitimate conversation is exacting a horrifying price in blood. Confirming to the US Senate Judiciary Committee in December that ISIS had recently circulated a video on social media emphasizing its support for attacks against Western targets, FBI Director James Comey confirmed that “several incidents in the United States and Europe over the last few months indicate that this ‘call to arms’ has resonated among [the terrorist organization’s] supporters and sympathizers.”In February, senior US administration officials met with executives of Apple, Facebook, Twitter and other technology firms to discuss remedies to this abuse of the Internet.Europe, still reeling from last year’s brutal attacks in Paris, is no less cognizant of the threat. Last summer, the European Union’s premier law enforcement agency, Europol, launched its Internet Referral Unit to “combat terrorist propaganda and related violent extremist activities on the Internet.” Part of its initial directive included sorting through 50,000 Twitter accounts linked to ISIS. Not surprisingly, it was recently announced that the unit will be doubled in size.On January 17, Dafna Meir, a 38-year-old Israeli nurse and mother of six, was murdered in front of her children in Otniel. Her assailant was a 15-year-old Palestinian. Meir was one of the latest fatalities in a wave of assaults that has cost the lives of 30 Israelis since September, and wounded hundreds more.Meir’s child-assassin explained to investigators that he had been inspired by the litany of anti-Israel hatred propagated continuously by Palestinian television, radio and social media. His cowardly crime attracts praise – and hopes of emulation – on Facebook, and is the focal point of Twitter hashtags. Given the centrality of incitement on social media in inspiring attacks, it is not surprising that almost 80 percent of the terrorists in this latest wave of assaults are younger than 25.Unfortunately such examples abound. Mahdi Akas stabbed an Israeli civilian last November. On that same morning, he posted pictures of armed terrorists to his Facebook profile and identified himself as a “martyr in waiting.” Osama Abu Ras, who walked into a gas station and stabbed an Israeli man on January 27, signaled his intentions when he inscribed on his Facebook page – a whole month earlier – that he yearned to “sacrifice his life” in just such an attack.We critically need an international effort to restore sanity. A cooperative framework must be constructed for governments around the world to collaborate in stemming the propagation of Internet hate – if necessary, by uniting to enact rigorous legislation that requires Internet and social media providers to monitor content and block that which encourages violence. The principals of these companies hold and must exercise corporate responsibility, including by enforcing standards of conduct capable of halting the proliferation of extremist ideology and terrorism.I am personally committed, in my capacity as minister of public security, to shepherding this process.The mandate of Facebook, Twitter, YouTube and the other engines of global connectivity cannot be limited to product development and profit alone. The same algorithms that micro-match advertising to consumer preferences – and which enable Facebook to now curb illegal gun sales through its portal – must be employed to ban terrorists and their sympathizers.This challenge to our liberal values and way of life will only intensify in the years to come. We neglect to act at our peril.MK Gilad Erdan is minister of strategic affairs and public diplomacy, and minister of public security, and a member of the security cabinet.