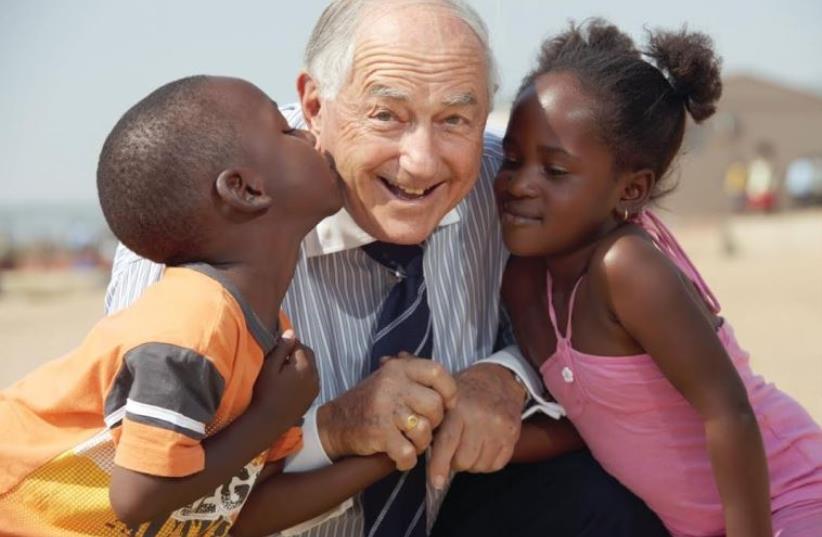 BERTIE LUBNER with two of many disadvantaged children he helped in South Africa
(photo credit: Courtesy)
Advertisement
Bertie Lubner passed away. These four words sent shock waves through the Jewish community of South Africa and particularly Johannesburg. He died in Johannesburg on Monday at the age of 85. Bertie was a “Jo’burg Boy.” Everybody knew Bertie Lubner or more correctly, everybody knew of Bertie Lubner and it seemed that he knew everybody from the president, to the chief rabbi to the guy selling the newspaper on the street corner.He was so involved in the community and beyond the community.In the commercial world, he and his brother Ronnie were spread around the world, involved mostly in plate glass and hard woods amongst other commodities. Nineteen countries and 23,000 employees. They had the Midas touch.But Bertie is best known (and will always be remembered) for the contributions he and his family made to charities.He was deeply involved in a local charity called Africa Tikkun.Tikkun – to repair the world, to eliminate injustices and errors. It was aimed at helping “previously disadvantaged (read “non-white”) mostly children to have a better life.Bertie said, “The first important feature in any Jewish family, that the parents will sacrifice anything for, is a good education for their children. So let’s take the theme into disadvantaged children.”They established Kibbutz Lubner, near Johannesburg, for children with personality mishaps and deficiencies.For more, much, much more about Bertie Lubner, as the current saying is, “Go Google it. It is all there.”Bertie was passionate about Israel – a common South African Jewish condition. He became a member of Ben-Gurion University of the Negev’s Board of Governors. In 2013, he was awarded an honorary doctorate for lifetime achievement.When the University of Johannesburg allied itself to Ben-Gurion University to develop water resources and agriculture issues in South Africa, he was involved. Shortly afterwards the University of Johannesburg canceled the agreement, citing Ben-Gurion University’s connection with Israel’s military (sic) and the “occupation!” Who lost out? Bertie Lubner’s funeral on Wednesday in Johannesburg was described as “massive.” So many organizations sent representatives, so many people felt the need to attend.The Johannesburg Star in its obituary columns had 15 out of 26 insertions relating to Bertie Lubner.Reeva Forman, who brought bimonthly Israel Now Tours to Israel from South Africa to show solidarity during the intifadas, sums it up for all of us: “My sincere condolences for the loss of a truly exceptional and great human being.A giant of a man in the field of philanthropy fulfilling the mitzva of tikkun olam. The South African Jewish community has lost one of its finest sons.”Bertie Lubner was a special person who was loved by all who knew him. We are honored and blessed by his memory.May his memory be for a blessing.