Israel Apartheid Week turned out to be a dismal debacle. Now to oppose it the Jews here are establishing their own IAW – Israel Awareness Week. 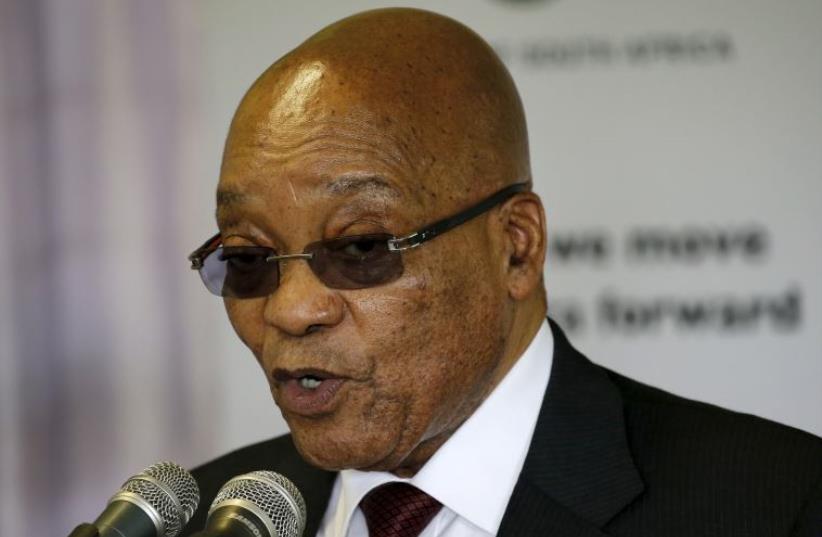 South Africa's President Jacob Zuma
(photo credit: REUTERS)
Advertisement
Hark! Listen! They sound you hear is either tinnitus or South Africa imploding. R.W.Johnson, a British author living in South Africa, recently published a book, How Long Will South Africa Survive?: The Looming Crisis. He is pessimistic about the future. However, Israel’s former president Shimon Peres said that pessimists end up in the grave. He is an optimist who “invests in the future.”Indeed, South Africa has troubles with President Jacob Zuma. It is unbelievable what a bad press he gets here. There are problems with the currency, the rand. Moody’s Investors Service is in the country and the fear is that it will downgrade our credit to junk status with all the tsorris that come with that. In addition the railways are in difficulties, the post office is bankrupt, there is turbulence in South African Airways, in the electricity supply corporation. There are problems with the gold and platinum mines, with the universities, with primary education, with service delivery in many mostly poorer areas etc., etc., etc., etc., etc. I could go on and on.But this last week has been bewildering. A family from India – the Guptas – who are closely connected with the Zuma family have been said to have “captured South Africa.” That is, to have bought their way into the highest levels.Now it has emerged that the Guptas even offered cabinet positions to various people obviously for private reasons. Apparently they had sufficient influence on Zuma to persuade him to appoint their chosen. Now suddenly we have heard from people who have refused the Guptas. The cat is out of the bag! The Guptas really became known here when they landed a private jet passenger plane at a military airport near Pretoria. It brought Gupta friends to a family wedding. Private plane? Military airport? Some poor airport official was blamed eventually.So now we have Zumagate, Guptagate and Investigate, although it is unlikely that an investigation into the third one will ever be opened, and the same goes for the other two! Dore Gold in the land of gold In the midst of Israel Apartheid Week here, Ambassador Dore Gold of the Israel Foreign Ministry arrived, almost unnoticed and barely reported.Apparently and surprisingly, he had been invited by the director-general of the Department of International Relations and Cooperation.Gold wanted “normalization of relations as part of Israel’s policy to foster stronger relations in Africa.”A writer to a newspaper stated, “It makes perfect sense to learn from them. Israel is leader in technology and medicine. In problems we face in agriculture, water, sanitation, electricity and on many other levels South Africa can only benefit from cooperation with Israel.”But a spokesman from the Department of International Relations said, “We have diplomatic relations with Israel but that doesn’t mean we won’t support Palestine.”Gold visited places relating to the anti-apartheid struggle, including the Mandela House museum and sites in Soweto where the struggle was fierce.He also met the chief rabbi of South Africa, Warren Goldstein.Gold was born in America in 1953, came to Israel and in time served as Israel’s permanent representative at the United Nations from 1997 to 1999.The question is: Can he change Israel’s diplomatic approaches to countries where Israel is not exactly embraced? He has Netanyahu’s authority behind him in the Foreign Ministry, which will lend a new punch in diplomatic efforts.An interesting note: Dore gold bar is a pure alloy of gold and silver. Can Dore bring some gold to Israel’s relations with South Africa? Israel Apartheid Week We need to remind ourselves of the 2001 UN Conference on Racism held in Durban which branded Israel an “apartheid state.” This was the birth of BDS. Its aim was to end the occupation, bring back the refugees of 1948 and delegitimize Israel.One must also recall the disrupted piano recital of 2013 by Israeli pianist, Yossi Reshef at the University of Witwatersrand in Johannesburg. The concert had hardly begun when it was disrupted by BDS members abusing the pianist, the organizers and the audience with shouts of “Kill the Jews.”The BDS regarded this as a triumph.Now it was that time of the year for BDS and its fellow travelers to raise their annual Israel Apartheid Week. The focus of BDS is to present Israel as “a uniquely evil and illegitimate Zionist entity” living on stolen Palestinian land. They are obsessed with the word “apartheid” despite little experience of it.On the campus of the University of Witwatersrand, the BDS supporters lined up on one side of a field, with the SA Union of Jewish Students on the other side. The verbally abused each other with threats and insults. SAUJS used a subtle poster campaign with large photos of Nelson Mandela with favorable comments about Israel and Jewish people. Also a poster on “The United Colours of Israel” showing how mixed and diverse the community is particularly stressing color. There was a poster on democracy showing Arab women voting, something unknown in some Muslim countries.In addition there were Jewish marches, one in Cape Town on Parliament and another in Johannesburg on the Legislature Building. This march was also supported by a group called the South African Friends of Israel, fiercely pro-Israel. A member said, “Most, if not all, BDS supporters have never visited Israel or have much knowledge of the situation in the Middle East. Theirs is a completely emotional reaction. Where ignorance is bliss.”So the Israel Apartheid Week turned out to be a dismal debacle. Now to oppose it the Jews here are establishing their own IAW – Israel Awareness Week.