"Over the past few years there has been a gradual rise in the number of road deaths in Israel." 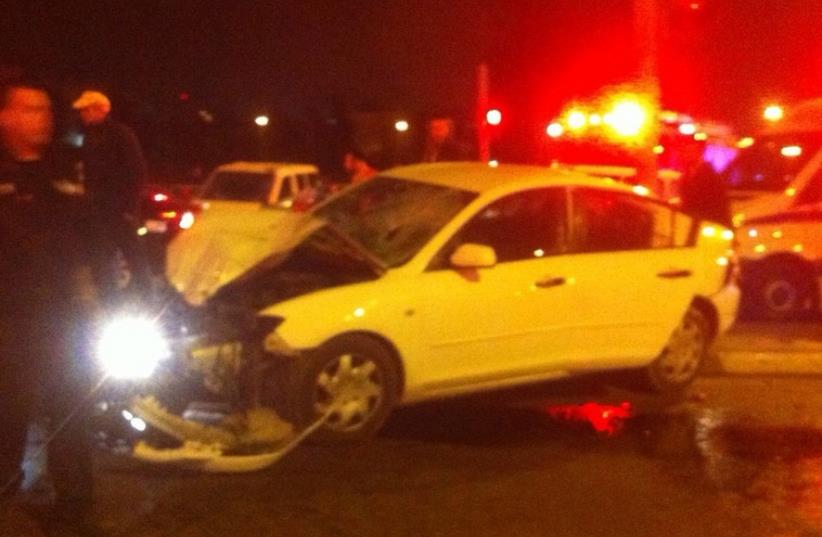 Scene of car accident in Jerusalem, April 15 , 2015
(photo credit: POLICE SPOKESPERSON'S UNIT)
Advertisement
As the Knesset marked National Road Safety Day on Tuesday, some blamed Israel’s policy makers for failing to prevent avoidable road deaths.Shmuel Aboav, CEO of Or Yarok, a road safety organization, claimed that a reduction of state funds earmarked by the Transportation Ministry for road safety has resulted in a rise in the number of road fatalities. Aboav also blamed lax police enforcement and inadequate road safety education for children.On average over the past year, traffic accidents have led to one fatality and 64 injuries daily or three casualties every hour, Or Yarok revealed on Monday.So far this year 298 Israelis have been killed in traffic accidents, compared to 261 over the same period last year.This is a 14 percent increase. At this pace, a total of 357 people will be killed this year in traffic accidents in all of 2015 compared to 320 in 2014.Over the past few years there has been a gradual rise in the number of road deaths in Israel. In 2012, 290 people were killed and 309 in 2013.We are slowly approaching the level of road deaths of a decade ago that hovered around 400 a year on average.Considered in this light, the Transportation Ministry’s announcement that the country is continuing to experience “a constant trend of declining road accidents” is blaringly disingenuous.Particularly shocking are the numbers of pedestrians killed. In 2012, 92 pedestrians were killed, in 2013, 94, in 2014, 125.So far this year 91 pedestrians were killed. At this rate, 110 pedestrians may be expected to die in road accidents in 2015.As can be expected, children and the elderly are disproportionately represented in pedestrian deaths, making up 40% of the total. This dismal statistic puts Israel in the league of poor countries in Asia, Africa, and Latin America.Admittedly there is much credence in Aboav’s claim that good state policies can bring down vehicular deaths and bad ones can cost lives. Many European countries have managed to halve their road death tolls since the late 1990s.At the same time, Israel faces unique challenges. While it might be true that in Scandinavian countries, child pedestrian death tolls are approaching zero, it is also true that Scandinavians don’t have that many children.And of course, we cannot exempt drivers and pedestrians from taking responsibility for their own lives and the lives of others. Drivers must know that when they get behind the wheel, they are taking upon themselves a hefty responsibility. Pedestrians, meanwhile, have an obligation to remain aware, make eye contact with drivers before they cross the street, rely less on the protection provided by crosswalks and take other precautions to reduce to a minimum their exposure to risk. There are no reliable statistics yet on how many pedestrians are killed while mindlessly stepping off the curb texting or heavily engaged in cellphone conversations.But there is also a policy recommendation to be made.Surveys of road accidents worldwide have shown that a 10% rise in the speed of impact results in a rise of almost 50% in fatalities for drivers, passengers, and pedestrians.In the last three years, Transportation Minister Israel Katz raised posted speed limits as well as the leeway regarding their enforcement to even higher levels, while cutting back on our national speed camera program.In Israel, higher speed limits, travel speeds and speed spillover have compromised the proven benefits of safety countermeasures in road and vehicle design. In other words, whatever the cause of the accident, it is the speed of impact that is the critical variable when considering casualties.A decade ago, Professors Elihu Richter and the late Gerald Ben-David and Dr. Yaakov Adler put together a platform – and their recommendations – summarized in the “Vision Zero Platform” presented by the Metuna organization for injury prevention, advocating for more public transportation, pedestrianization of our roads, and speed-control programs. This platform was based on evidence-based estimates of the results expected from nationwide application of these measures. It is time to revisit this platform.If we dedicate even a fraction of the emotional involvement and media coverage to the bloodshed on our roads that we do to terrorist attacks, we would be well on our way to reducing unnecessary road deaths to a minimum.