Netanyahu’s trip to Liberia is a step toward repairing ties with Africa. 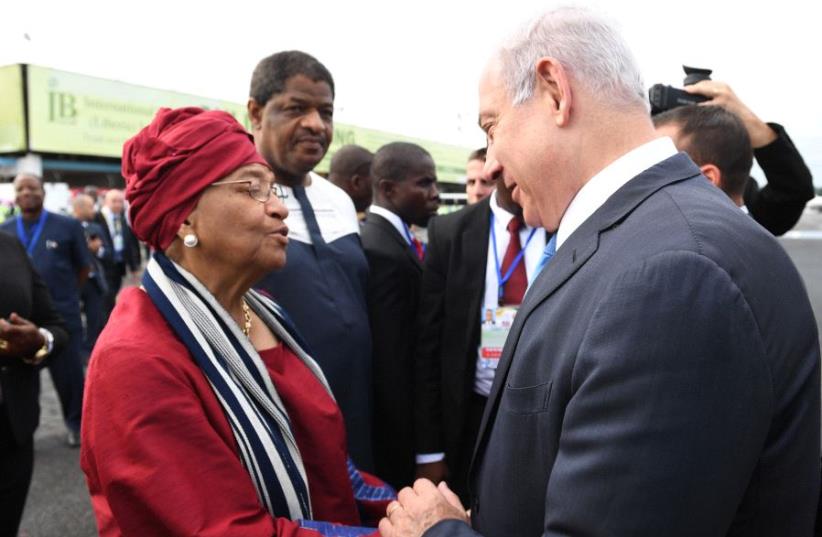 PM Netanyahu in Liberia
(photo credit: KOBI GIDEON/GPO)
Advertisement
Prime Minister Benjamin Netanyahu went to Liberia on Sunday to address the leaders of the Economic Community of West African States (ECOWAS).It was the first time a non-African leader addressed the gathering, a clear sign of warming ties between the Jewish state and the African continent, and Netanyahu’s second trip to Africa in less than a year. Last July, he traveled to four East African countries – Uganda, Kenya, Rwanda and Ethiopia – for the first visit by a sitting Israeli prime minister to Africa in 29 years.Much of the news surrounding the one-day trip has focused on the king of Morocco’s cancellation in protest against Netanyahu’s presence. But the very fact that Netanyahu was invited to speak before the representatives of the 13 African countries that make up ECOWAS is nothing short of extraordinary. Apparently, Israel is important enough that organizers were willing to take the risk of inviting Netanyahu despite the possibility that some African countries might protest.Bénin, Burkina Faso, Cape Verde, Côte d’Ivoire, Gambia, Ghana, Guinea, Guinea-Bissau, Liberia, Nigeria, Senegal, Sierra Leone and Togo have official ties with Israel. Niger and Mali do not.Netanyahu’s trip to West Africa is important on a number of different levels. Diplomatically, Netanyahu hopes to break the bloc of 54 African countries that automatically votes against Israel in the UN. An important part of Netanyahu’s objective in courting Africa is to dissolve this bloc and sway it to support the Jewish state at the UN and in international organizations.Like Israel, Africa is confronting Islamic terrorism from Al Shabaab, Boko Haram and Islamic State affiliates. Israel has much to offer in the field of homeland security, whether it be advanced technologies or training strategies. Israel’s experience with its own terrorist challenges, combined with its exceedingly well-developed hi-tech sector has made it a world leader in cyber technologies, as well.In addition to the potential for military cooperation, Africa can benefit from its ties with Israel in other fields, as well. From fish ponds and agrotech for growing produce in the desert, to water security and irrigation methods, Israel is a world leader.Currently, imports to Africa make up just 3% of total Israeli exports so there is much potential for growth. Countries such as Ethiopia, Ghana and Cote d’Ivoire are ranked among the fastest growing the world. A burgeoning middle-class is beginning to develop and with it many economic opportunities.And there are many opportunities for post-IDF Israeli youths to combine the traditional trip abroad with volunteering to serve in Africa. NGOs such as Innovation Africa help develop solar energy, drip irrigation and other technologies on a continent in which 600 million live without electricity.Israel’s ties with Africa were not always strained. Until the Six Day War and the Yom Kippur War when Africa came under the sway of the Soviet Union and the Arab nations, dozens of Israeli doctors, educators, youth leaders and agriculturalists helped newly created African countries take their first steps toward nation-building. It was only natural that there is was an affinity between Israel and these nations. These were peoples who had suffered from discrimination and a lack of political sovereignty and had finally regained autonomy in their historical homelands.In his book Altneuland, published in 1902 just five years after the Zionist council of Basel formally initiated the drive for a Jewish state, Herzl wrote: “Once I have witnessed the redemption of the Jews, my people, I wish also to assist in the redemption of the Africans.” Golda Meir, one of the architects of Israel’s foreign policy doctrine, noted that “Like them [Africans], we had shaken off foreign rule; like them, we had to learn for ourselves how to reclaim the land, how to increase the yields of our crops, how to irrigate, how to raise poultry, how to live together and how to defend ourselves.”Israel could provide a better model for the newly independent African state, Meir believed, because Israelis “had been forced to find solutions to the kinds of problems that large, wealthy, powerful states had never encountered.”After decades of tense relations, Israel is now gradually nurturing these old commonalities for the benefit of both Africans and Israelis. Netanyahu’s short trip to Liberia is yet another step toward repairing the lapsed ties with Africa.