Erdogan is in the driver’s seat, steamrolling not just freedom of the press in Turkey but also the EU’s credibility in the face of accusations of “falling silent” on Turkish abuses. 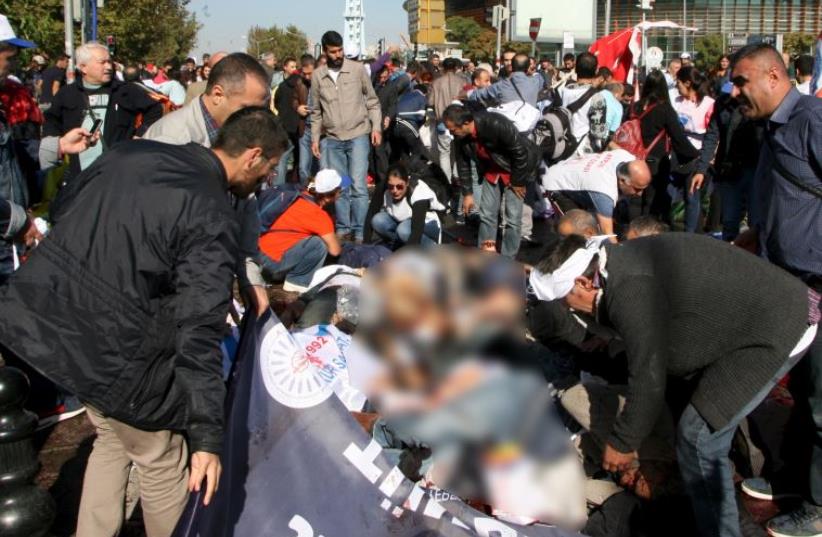 People lay on the ground as survivors surround them to offer help after an explosion during a peace march in Ankara, Turkey, October 10, 2015
(photo credit: REUTERS)
Advertisement
Press freedom has just been steamrolled by the Turkish government, with the announcement Friday by the Sixth Criminal Court in Istanbul of the appointment of a board of trustees to take over management of the leading Turkish opposition newspaper, Zaman. This led to the effective seizure by the government of the paper associated with Turkish President Recep Tayyip Erdogan’s political opponent, Fethullah Gulen.This announcement does not come as a surprise, being only the latest “deeply troubling episode” in “the Turkish authorities’ ongoing onslaught on dissenting media” as Amnesty International’s Andrew Gardner said today.The decision came on the same day Donald Tusk, president of the European Council, was snapped shaking hands with President Erdogan in front of the glittering golden Ottoman thrones in Erdogan’s presidential palace. Tusk’s meeting with Erdogan marked his final meeting in Turkey, organized ahead of today’s second EU-Turkey summit on migration.While the act itself is deeply worrying, the total omission of this most recent affront to the freedom of the press from Tusk’s press release following the meeting with Erdogan Friday afternoon bodes equally ill. The press release is conveniently entitled a “letter of invitation” to the March 7 EU-Turkey Summit on migration, the second of such high-level political dialogues created to manage the migration crisis and “re-energize” EU-Turkish relations.The timing of the court’s decision illustrates Erdogan is in the driver’s seat, steamrolling not just freedom of the press in Turkey but also the EU’s credibility in the face of accusations of “falling silent” on Turkish abuses in exchange for help with the migrant situation.Faced by the largest migration crisis since the Second World War the EU rebooted relations with Turkey, which it turned to in the autumn of last year at the peak of the crisis. The EU launched cooperation with Turkey with the Joint Action Plan on October 15, 2015, followed by promising €3 million ($3.3m.) in humanitarian assistance for Syrian refugees in Turkey – the first installment of €95 million ($104m.) from such funds was also announced Friday.There was recently a sigh of relief in Brussels when Turkey’s Constitutional Court ruled to free Cumhuriyet journalists Can Dündar and Erdem Gül, facing life imprisonment after writing about government connections to Islamic State (ISIS). The ruling was followed rapidly by a wave of congratulatory tweets from EU commissioners all expressing their disapproval of the violation of rights and the pending life sentence the two still face. But Friday’s announcement to appropriate Zaman was met only with an awkwardly delayed reaction from Commissioner Johannes Hahn or High Representative Federica Mogherini.Above all they linked democratic standards solely to the until recently stalled enlargement process, conveniently disassociating Turkey’s ills from any other form of strategic engagement currently on the table.“This move not only further threatens media pluralism in the country, but also intimidates critical voices,” said Dunja Mijatović, the outgoing representative on freedom of the media at the Organization for Security and Co-operation in Europe in Vienna. Tusk’s statement following his meeting with Erdogan Friday and the lack of any press release on his behalf could indicate a strategic self-censorship by the EU leadership. This is in light of the looming prospect of better weather in spring, which will bring an increase of migration into the EU from the Aegean Sea, increasing the need for effective management of the migration crisis that the Summit hopes to achieve.The irony of realpolitik remains – while Tusk met with Turkish Prime Minister Ahmet Davutoğlu Thursday and President Erdogan Friday to prepare the ground for the next EU-Turkish Summit that has the aim of effectively streamlining a safe route of migration into Europe for refugees, he leaves a country more unstable and less free with a leadership intent on steamrolling his country toward autocracy.