Whoa, hold your horses! Take a deep breath. Iran does not have the bomb. The sky has not fallen. 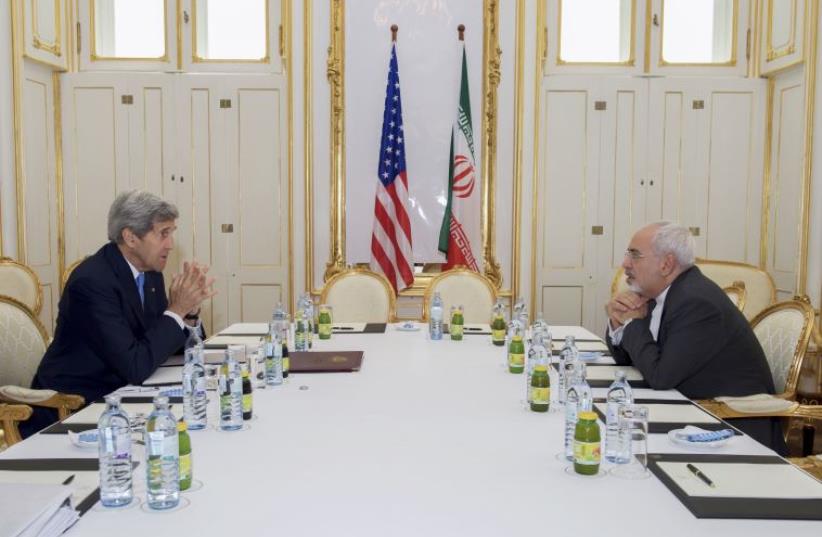 IRAN-NUCLEAR/ RTX1IHEE 30 Jun. 2015 Vienna, Austria U.S. Secretary of State John Kerry (L) meets with Iranian Foreign Minister Javad Zarif at a hotel in Vienna, Austria June 30, 2015. (file)
(photo credit: REUTERS)
Advertisement
Whoa, hold your horses! Take a deep breath. Iran does not have the bomb. The sky has not fallen. Israel is not about to be erased from the map.Yes, the deal struck with the world powers confirms Iran’s status as a threshold nuclear state; yes, more could have been extracted in negotiations with a regime on the ropes economically and facing mounting internal pressures; yes, it frees Tehran from the noose of sanctions and gives it billions of dollars that can be used to finance terrorism and regional subversion; and no, it doesn’t give inspectors “anytime, anywhere” access.But in the short term at least, the deal turns back the clock and places obstacles in Iran’s path to nuclear weapons. The deal dramatically cuts Iran’s enriched uranium stockpile to levels insufficient for the production of one atomic bomb and puts it around a year from breakout.By Israel’s own intelligence estimate, Iran was, before the interim deal of 2013, a threshold state within three months of breakout and with enough enriched uranium for the production of several bombs.
See the latest opinion pieces on our page
Iran will be subject to those conditions for 10 years, after which the sunset clause applies and it will be allowed to enrich uranium to 20 percent, drastically shortening its potential breakout time. That, of course, does not give it free license to rush to build a nuclear bomb. It will be subject to the Non-Proliferation Treaty, and any attempt to obtain nuclear weapons could lead to the return of sanctions and even a military option. Moreover, if the powers proved too pusillanimous to act, Israel would have full justification for doing so.
The deal could most definitely have been better, and it also could have been worse; but either way, the apocalyptic language and doomsday rhetoric that have been employed are out of place.Prime Minister Benjamin Netanyahu has alluded to the Holocaust, and Education Minister Naftali Bennett described the agreement as the birth of a “terrorist nuclear superpower.”But Iran, while it has a proven record of supporting terrorism, is not yet nuclear and is no superpower; it is a repressive, corrupt, crony state with a GDP per capita of $5,200, placing it at 99 in the world for 2014, squeezed in between those two other superpowers Jamaica and Belize.Israel, on the other hand, as former prime minister and chief of staff Ehud Barak noted after the deal was announced, “is still the strongest country in the Middle East, militarily, strategically, economically, politically.”Barak and many other former senior Israeli security officials have said the Iranian threat is not existential. Former Mossad chief Efraim Halevy spoke of Israel’s unprecedented capabilities, both defensive and offensive.“The Iranian threat is very serious,” he said, “but there is no existential threat to Israel, because Israel has many and diverse means to protect itself... that are the fruit of the best minds of the Jewish people over the last century.”Leaders are supposed to instill strength and steel, not fear and angst.There is, of course, good cause for concern.Iran makes no secret of its hostility and even its desire to destroy Israel. It has a long history of deceit, and inspection regimes are far from foolproof.But good or bad, the deal is now reality – any attempt to get Congress to vote against it and override a presidential veto is almost certainly doomed to failure – and that leaves Israel needing a strategy, Halevy told me.An all-out battle with Congress could lead to severe fallout, warned Halevy.Even if Israel were to manage to secure an override of the presidential veto, that would mean the United States would no longer be an active player, and the remaining option would be for Israel to negotiate with Russia and China on what to do with Iran – and their positions are very clear, he said with a touch of cynicism.The other option, he said, is to work out a strategic understanding with the US.“You can either say, ‘We will go all out, and the winner wins all and the loser loses all,’ or you can say, ‘No, I tried this before, when I tried to unseat [US President Barack] Obama in 2012; perhaps winner takes all and loser loses all is not the right strategy today.’” A strategic understanding with the US could involve developing a plan of action in the event that Iran violates the agreement, agreeing on compensation measures to increase Israel’s military edge and perhaps even reaching an arrangement for an American nuclear umbrella.In the meantime, Israel should utilize the time afforded by the deal to continue to build up independent capabilities to destroy Tehran’s nuclear program if necessary.Meanwhile, back in September 2013, Obama told the United Nations General Assembly: “In the near term, America’s diplomatic efforts will focus on two particular issues: Iran’s pursuit of nuclear weapons, and the Arab-Israeli conflict.”From Obama’s perspective, he has achieved the first of those objectives.With 18 months left to the end of his presidency, he will be pushing hard to achieve the second. Obama summoned a senior Jewish leader last week to convey a message to Netanyahu that if there is no movement on the Palestinian track by September, the US will not veto a French UN resolution that calls for the immediate resumption of Israeli-Palestinian talks and their permanent conclusion within 18 months.The Vienna deal, Netanyahu told the Knesset on Jabotinsky Day this week, is “not the last word.” He may well be right.