Strengthening the minds and hearts of European advocates for Israel 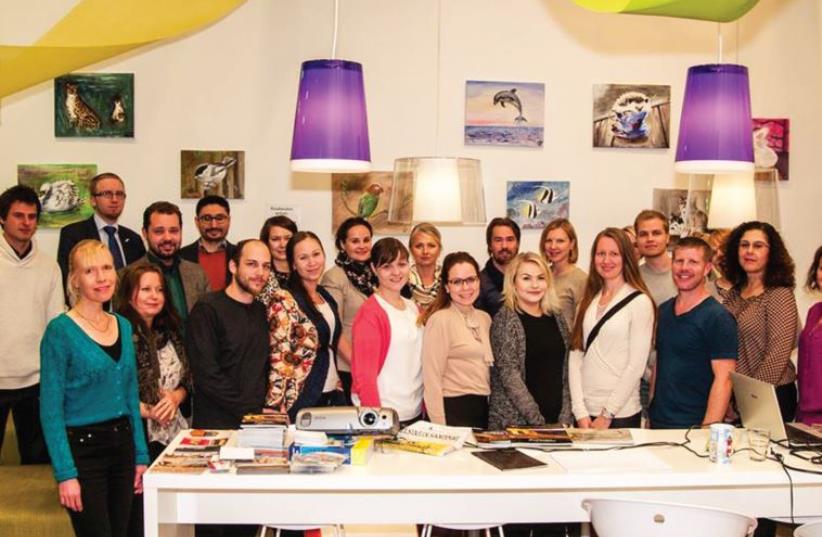 A PHOTO of some of the students participating in the trip to Sderot.
(photo credit: Courtesy)
Advertisement
Israel advocacy is dealing with a propaganda machine.Parts of the propaganda machine are supported, often unwittingly, by Western donors to the Palestinian Authority, to a wide variety of NGOs and to the United Nations Relief and Works Agency (UNRWA), which is one of the most egregious examples. Palestinian schools, including those run by UNRWA, have brainwashed three generations of Palestinians, not only in Gaza, but elsewhere in the Middle East. Palestinian schools too often poison children’s minds, not least through textbooks riddled with incitement to kill Jews, hatred of Jews simply for being Jews, glorification of jihad and praise for terrorists who murder Israelis.As long as this persists, the Palestinians will forever be at war with Israel and will forever remain refugees.Donors must be made to understand such issues and make funding contingent on reforms in all of the institutions that democratic Western nations support. Aware and empowered citizens in grassroots movements are essential to affect political leadership.As director of the Sderot Media Center, which hosts thousands of visitors a year, I was invited in October 2015 to countries subsidizing the textbooks mentioned above. I visited, Sweden, Ireland and Finland, and my special mission was to make presentations about the situation on the Gaza border. Along the way, I met many people who wish to articulate the truth about Israel and the challenges she faces, but who have a very difficult time doing so because they are not well enough equipped with knowledge and appropriate tools.For example, Israeli embassy employees in Sweden told me about bureaucratic and legal foot-dragging that delay authorization and release of substantive material from the field. This creates a strategic lapse in their ability to articulate a formal Israeli position and to support those who are willing to stand with Israel. Our friends are left to stutter in the face of the enemy’s propaganda machine.In Helsinki, Finland, I met with a group of young professionals in their thirties who support Israel – but had never heard about Kassam rockets, had never heard about Sderot even though it is one of the most bombarded cities in the world since the Second World War. And a senior politician in Finland who is also an enthusiastic supporter of Israel asked me to prepare for him a document with a concise list of points so that he could hold his own in a debate about his country’s foreign policy and foreign aid that would take place in the parliament.Israel advocacy must focus on the communities that support Israel and on the key players in those communities, not least the very diverse Christian communities all over Europe.These communities consist of thousands of people, many of whom would love to be advocates.There is, however, very little sharing of strategy, coordination – or even information.And there is a growing generation gap. Even the most enthusiastic Israel-supporting Christian communities in these countries are finding it hard to pass on their affinity and support for Israel to the next generation, who are being targeted by well-financed, aggressive anti-Israel campaigns, not least through the international BDS movement (Boycott, Divest, Sanction).Israel advocacy must be bolstered with reliable, up-to-theminute information. But this is not enough. Advocates and potential advocates must be fueled with a source of excitement and a moving experience to keep them going – and to touch the hearts of their audiences and interlocutors, even in a hostile environment.My personal mission is to provide some of this fuel, by presenting the best and most beautiful sides of Israel through the art of photography, combined with telling the true story of Israelis living along the border with Gaza.My visits to Sweden, Ireland and Finland provided me with a sense of optimism and concrete ideas about how to take the next steps. During the next several months I will be returning to these countries – and visiting Norway and Denmark – with the overall goal of connecting entire communities to Israel through the power of richly illustrated storytelling.It is not hopeless and it is not mission impossible.

The author is director of the Sderot Media Center.