Support for Israel is vital to defeat terror

Once true cause of radical Islamic terrorism is understood, West will realize that Israel is a valuable partner. 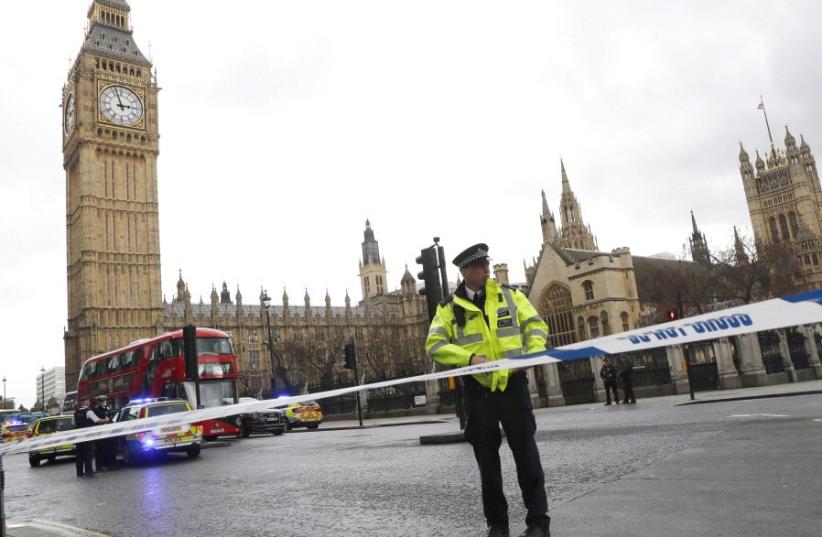 Police tapes off Parliament Square after reports of loud bangs, in London, Britain, March 22, 2017.
(photo credit: REUTERS)
Advertisement
Last Wednesday Europe was targeted by yet another barbaric radical Islamic terrorist attack. This time a British-born Muslim convert, Khalid Masood, drove across the Westminister Bridge, running over pedestrians along the way, then stabbed a policeman guarding the UK Parliament to death before being neutralized. The attack resulted in four innocent people murdered and over 40 wounded; Britain’s deadliest attack since the 2005 London bombings. Islamic State (ISIS) has claimed responsibility for the attack.This was not the first time the West has been the target of a vehicular terrorist attack.The two most deadly occurred in Nice and Berlin less than a year ago, where 84 and 12 people respectively were murdered by radical Islamic terrorists. Also Ohio State University was targeted by a vehicular ramming and stabbing attack late last year.Sadly, this reality is all too familiar to Israelis who, in just the past year and a half, have been the target of 171 stabbing attacks and 110 attempted stabbings; 141 shooting attacks; and 55 vehicular (ramming) attacks.The attacks in London, Nice, Berlin, Ohio and others were clearly inspired by the Palestinian terrorist attacks in Israel and by ISIS’s online propaganda that praised the Palestinian terrorism methods.Because the threat of radical Islamic terrorism is rather new to the West, its leaders and media are still struggling to correctly identify the threat and are therefore unable to effectively repel it. In the name of often well-intended political correctness, many in the West try to blame the existence of terrorism on largely irrelevant factors such as poverty, social injustice, foreign policy blunders and even the Israeli-Palestinian conflict.Although these factors may or may not fuel radical Islamic terrorism, none of them are the cause of it. Radical Islamic terrorists, or jihadists, are driven by Islamism – a political ideology with roots in Muslim scriptures that calls for the destruction of Western society and the establishment of Sharia law (Islamic law) worldwide. The Western world, including Israel, is a target of jihadist aggression because we cherish, represent and defend values that oppose Islamism – such as democracy, equality, freedom of speech and freedom of religion.Once the true cause of radical Islamic terrorism is understood, which is happening slowly but surely, the West will realize that Israel is a valuable partner in the fight against terrorism and that condemning Israeli self-defense practices or “the occupation” will not prevent or diminish the jihadists’ aggression. Jihadists attack us for who we are and what we stand for, and they will never stop unless we unconditionally submit to their ideology or utterly defeat them.Partly because of its geographical location, and partly because it is a Jewish state, Israel is the main target of radical Islamic terrorism.Terrorists often view Israel as test-case before exporting the terrorism strategies and methods to the West, including vehicular and stabbing attacks, suicide bombings, aircraft hijackings, the use of human shields and more.Besides the fact that supporting a fellow democracy is the right thing to do, the West should support Israel in its fight against terrorism because it will weaken that same ideology and movement that targets the West.Furthermore, by treating Israel as a partner instead of as the cause of terrorism, the West can learn from Israel’s decades of experience in fighting terrorism while remaining a vibrant democracy.Many in the West rightfully fear that terrorism will be a part of our lives for the foreseeable future. Luckily for them, Israel has proven that despite being the target of more terrorist attacks than any other Western country, it can not only endure but prosper both economically and socially. Israel has one of the lowest unemployment rates among OECD countries (slightly above 4%), and one of the highest GDP growth rates for 2016 (3.8%). Israel’s population is one of the world’s happiest (11th) and healthiest (9th) with an average life expectancy that is three years longer than in the US (82 years).Israel should serve as an inspiration to the West in the fight against terrorism instead of being treated like a punching bag.There are many ways for the West to help Israel with mutually beneficial outcomes.Western leaders need to stop condemning Israeli-self defense practices and instead forcefully condemn Palestinian terrorism.Palestinian terrorists and the Palestinian Authority which encourages terrorism need to face serious consequences for their actions.Governments and security agencies should cooperate with Israel on counter- terrorism efforts and share intelligence.Western governments should stop funding NGOs, organizations and authorities that support, promote, or engage in terrorism against Israel. The world should stop looking the other way as Hamas steals foreign aid to build its terrorist army, Hezbollah continues to rearm and Iran repeatedly threatens Israel with annihilation. Democratic countries should support Israel in international forums instead of restraining it in its fight against terrorism.By dealing a blow to terrorists targeting Israel, terrorists all around the world will get the message. The free and democratic world stands united against radical Islamic terrorism, understands the threat, and has the conviction, will and perseverance to defeat it.The author is a member of the Jewish Diplomatic Corps, a flagship program of the World Jewish Congress, and a board member of the Zionist Federation of Sweden. Follow him on Twitter: @GabRosenberg.