Among the survey’s respondents, Israel’s Arab citizens are by far the most optimistic about a shared future. 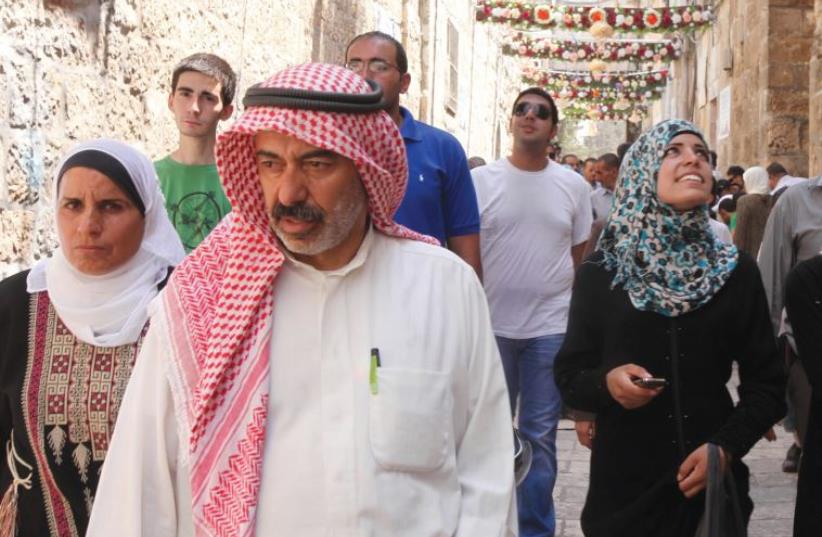 Muslims making their way to the mosque for Ramadan at the Lions’ Gate in the Old City
(photo credit: MARC ISRAEL SELLEM)
Advertisement
Who are Israel’s Arab citizens? Their civic identity is Israeli while their national identity is Palestinian.There are some who want to sharpen the apparent contradiction embedded in this complex identity.On the one hand, there are Jews who demand “loyalty” to the state as a condition of granting equal rights to Arab citizens. On the other hand, there are Arabs who demand the abolition of the state’s Jewish character as a condition for cooperating with Israel.Both groups are eager to whip up Jewish- Arab relations in Israel into a maelstrom fueled by mutual suspicion and demonization. It is not only members of each side’s radical fringe, such as MKs Oren Hazan and Haneen Zoabi, who play this game. Many other Jewish and Arab politicians are similarly engaged, trafficking in hatred and rejectionism.However, a joint Palestinian-Israeli survey, conducted by Prof. Tamar Hermann of the Israel Democracy Institute and Dr. Khalil Shikaki of the Palestinian Center for Policy and Survey Research, published last month, reveals something fascinating. The position of Arab Israelis on the Israeli-Palestinian conflict falls squarely in the political center.Indeed, Arab-Israeli towns and villages – Sakhnin, Nazareth, Kafr Yasif and Rahat – are home to a large group of citizens whose opinions are strikingly different from those of both Israeli Jews and Palestinians living in the West Bank and Gaza.These opinions deserve our serious attention as they cast a ray of light into a seemingly dark place.Among the survey’s respondents, Israel’s Arab citizens are by far the most optimistic about a shared future. Whereas only half of Palestinians and Israeli Jews support the two-state solution, a large majority (87 percent) of Arab Israelis do.When pollsters presented respondents with a comprehensive “package deal” to end the Israeli-Palestinian conflict – including the contours of final status arrangements laid on the table in previous rounds of negotiations – only 39% of Palestinians and Israeli Jews reacted favorably. However, Arab Israelis expressed overwhelming support (90%) for these plans. A minority of Palestinians (40%), a majority of Jews (64%), and almost all Arab citizens of Israel (91%) voiced support for mutual recognition of Palestine and Israel as the national homelands of their respective peoples.A more detailed analysis brings the uniqueness of Arab-Israeli attitudes into sharper focus. When it comes to compromise on the status of Jerusalem, only about 30% of Palestinians and Jewish Israelis agree to the two parts of the city serving as the respective capitals of a Palestinian and a Jewish state, whereas fully three quarters of Israeli Arabs were prepared to accept such a solution.Concerning the thorny refugee issue (from Israel’s 1948 War of Independence), the survey asked respondents about one proposal, according to which Israel would allow the return of 100,000 Palestinian refugees as part of a family reunification framework, while paying reparations to the rest, who would only be allowed to return to the Palestinian state. Jewish Israelis vehemently rejected this idea (only 17% supported it), while Palestinians gave it moderate support (49%). Arab Israelis, on other hand, were overwhelmingly in favor (84%).WHAT ARE the Palestinians’ long-term aspirations regarding Israel? The percentage of Jews who believe that the Palestinians would like to conquer Israel and annihilate its Jews is five times that of Arab Israelis (40% vs 8%). However, this belief does not moderate the fear of Palestinian terrorism, which is strong among all Israelis – Jews as a whole (72%), West Bank settlers in particular (64%), and Arab citizens (62%).What about xenophobia? According to the survey, 65% of Jews fear Palestinians and 45% of Palestinians fear Jews.However, Arab Israelis are not afraid: only 20% say they fear Jews. Moreover, whereas mutual trust between Jewish Israelis and Palestinians is very weak (24% and 11%), a majority (56%) of Arab Israelis trust Jewish Israelis.The irony is clear: while the two armed parties to the conflict are afraid of each other, the Jewish state’s Arab minority lives in relative comfort and security.What to make of all this? Although one need not agree with the positions held by Israel’s Arab citizens, it can’t be denied that they constitute an independent, moderate voice – and a promising political middle ground on the Palestine- Israeli conflict.In sum, there is no resemblance between the actual opinions and attitudes of Arab Israelis and the caricatures depicted by extremist Jewish and Arab rabble-rousers. That is a hopeful conclusion on which visionary leaders could build. The writer is vice president for research at the Israel Democracy Institute and Professor of Law at Bar-Ilan University.