Terra incognita: The Temple Mount crisis - a look back 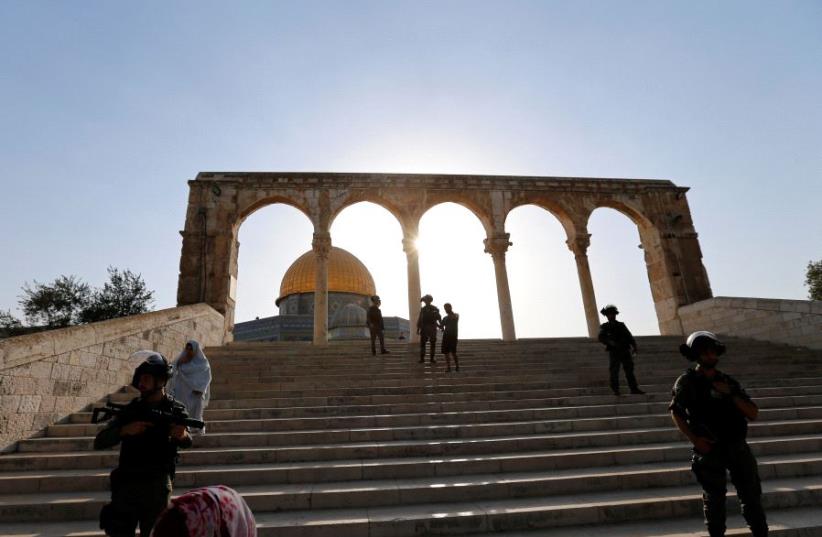 Israeli security forces stand at the compound known to Muslims as Noble Sanctuary and to Jews as Temple Mount, after Israel removed all security measures it had installed at the compound, and Palestinians entered the compound in Jerusalem's Old City July 27, 2017.
(photo credit: REUTERS)
Advertisement
On Thursday, police opened the last gate to the Temple Mount that had been closed due to the terrorist attack on July 14. After throngs of protesters chanted and clapped next to Bab al-Huta, the “Gate of Forgiveness,” Israel police opened it in the afternoon and video showed hundreds of Muslim worshipers celebrating what they said was a “victory” near the Dome of the Rock and al-Aksa Mosque.Since Wednesday night, when Israel began removing metal gates and cameras near the Gate of the Tribes, there has been jubilation among Palestinians that they have won the latest round with Israel. It is worth looking back at a tense two weeks.On July 14 three Arabs from Umm el-Fahm, a city inside the Green Line, arrived at the Temple Mount where, video later showed, they received guns and weapons that had been placed there by a fourth accomplice. The three then attacked and killed two Border Police officers at the Gate of the Tribes before being killed themselves back on the Mount. Israel’s response was to close the Temple Mount while an investigation was conducted and to install metal detectors at several gates, most noticeably at the Gate of the Tribes.By Sunday the Wakf Islamic trust and Palestinian leaders argued that until Israel removed the metal detectors and other changes to the “status quo,” Muslim worshipers should not return to al-Aksa and the Haram al-Sharif. Words such as “defilement” and “transgression” were used to accuse Israel of a secret plot to take over the sensitive holy site.What followed was an intensely religious struggle, devoid of the usual political leaders in Ramallah or Gaza.Hundreds of Muslims from Jerusalem protested nightly at Lions’ Gate in mass prayers that were often peaceful, but sometimes resulted in clashes. This was a seemingly spontaneous religious revival led by lay preachers, some of them connected to Hizb ut-Tahrir and other groups that are popular in Jerusalem.During the first week the government held firm in its decision to stick with the metal detectors which the police had recommended, despite warnings from the Shin Bet (Israel Security Agency) and the army.The security cabinet had to weigh the desire to protect police officers and react immediately to the new threat of weapons being smuggled onto the Temple Mount, against the clear danger that a massive, intifada-like conflagration would result in the West Bank that could damage Israel’s relations throughout the Muslim world.Warnings of violence last Friday after Muslim prayers were realized when a terrorist murdered three Israelis in Halamish in the West Bank, and several Palestinians were killed during riots.On Monday, a Jordanian stabbed an Israeli Embassy security guard in Amman in an attack that left a Jordanian bystander dead along with the perpetrator. This created a diplomatic crises and coincided with Israel’s decision to remove the metal detectors. But their removal did not stop the protests on Wednesday, when worshipers complained that cameras were still violating the “status quo.” Hoping to avoid another Friday of violence, and under pressure from Jordan, Saudi Arabia and probably others, the government decided to remove the last elements of security that had been installed after July 14.This leaves many with a sigh of relief and a belief that Jerusalem has returned to “normal.” But is it really normal? The funeral for the perpetrators from Umm el-Fahm was not the quiet affair of a city ashamed that three of its sons carried out an attack at a holy site. Rather the bodies were greeted with cheers as “martyrs.”Some 10,000 came to the funeral. Worshipers in Jerusalem protesting against the metal detectors regularly called out antisemitic chants against “the Jews,” whom they promised to treat as Jews had been treated in the seventh century in what is now Saudi Arabia. In Jordan on July 16 the parliament speaker, Atef Tarawneh, praised the attack on Israeli police: “Allah be upon our martyrs who sowed and watered the pure land.”When all this is added up, along with the frequent references to “resistance” on social media, the picture is not a healthy one.Without Israel installing metal detectors or doing anything, there was a large pool of hatred and support for killing Israelis.This is a known quantity, but Israel’s political leadership led by Prime Minister Benjamin Netanyahu miscalculated and lurched from crises to crises over two weeks, before climbing down in what makes it look like Israel lost. For a country whose right-wing leaders claim the Middle East understands strength and deterrence, there was not much strength or deterrence.This has left many on the political Right and also in the Center in the Israeli public perplexed. It seems one more example of Netanyahu’s inability to manage a crisis and to see the long term.Jordan has asked Israel’s ambassador not to return for the present. Israel has no ambassador in Egypt after he was withdrawn last December due to security concerns. Russia has monitors in Syria, near the Golan Heights. Hezbollah’s Hassan Nasrallah is boasting of victory in Lebanon. The sense is that Israel, which is very powerful militarily, was defeated by mass civil disobedience. That may lead to victory celebrations by our enemies in the near term, and it could lead to more combustible situations later. It could also lead to a belief that civil disobedience can get Israel to change its policies. It doesn’t seem that it has led to any kind of peace or dialogue.