Terrorism persists because it works

The United Nations glorifies terrorism by placing counties that support terrorism in high positions of authority and honor and by welcoming with open arms the promoters of terrorism. 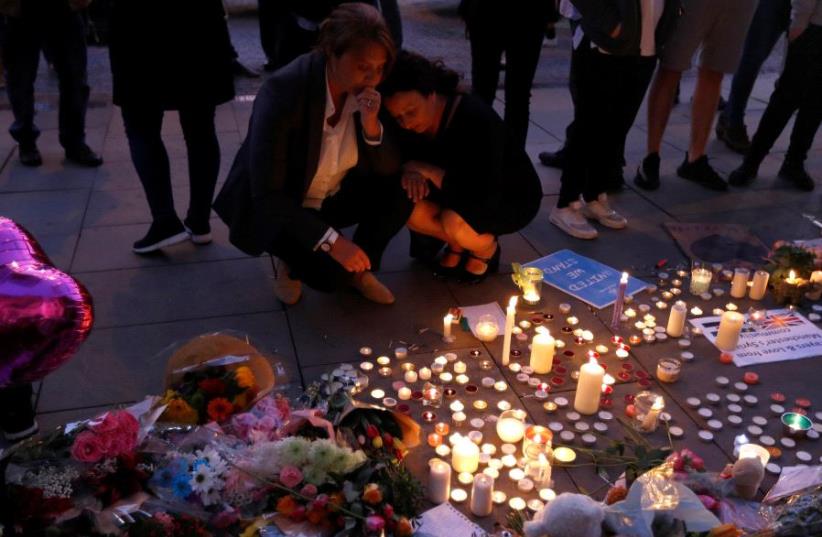 People pay their respects to the victims of the deadly suicide bombing in Manchester that took place during an Ariana Grande concert.
(photo credit: REUTERS)
Advertisement
Every time a horrendous terrorist attack victimizes the innocent we wring our hands and promise to increase security and take other necessary preventive measures. But we fail to recognize how friends and allies play such an important role in encouraging, incentivizing and inciting terrorism.If we are to have any chance of reducing terrorism, we must get to its root cause. It is not poverty, disenfranchisement, despair or any of the other abuse excuses offered to explain, if not to justify, terrorism as an act of desperation. It is anything but. Many terrorists, such as those who participated in the 9/11 attacks, are educated, well-off, mobile and even successful. They make a rational cost-benefit decision to murder innocent civilians for one simple reason: they believe that terrorism works.And tragically, they are right. The international community has rewarded terrorism while punishing those who try to fight it by reasonable means. It all began with a decision by Yasser Arafat and other Palestinian terrorist groups to employ the tactic of terrorism as a primary means of bringing the Palestinian issue to the forefront of world concern. Based on the merits and demerits of the Palestinian case, it does not deserve this stature. The treatment of the Tibetans by China, the Kurds by most of the Arab world, and the Chechen people by Russia has been terrible – but their response to grievances has been largely ignored by the international community and the media because they mostly sought remedies within the law rather than through terrorism.The Palestinian situation has been different. The hijacking of airplanes, the murders of Olympic athletes in Munich, the killing of Israeli children at Ma’alot and the many other terrorist atrocities perpetrated by Palestinians have elevated their cause above all other causes in the human rights community. Although the Palestinians have not yet gotten a state – because they twice rejected generous offers of statehood – their cause still dominates the United Nations and numerous human rights groups.Other groups with grievances have learned from the success of Palestinian terrorism and have emulated the use of that barbaric tactic. Even today, when the Palestinian authority claims to reject terrorism, it rewards the families of suicide bombers and other terrorists with large compensation packages that increase with the number of innocent victims. If the perpetrator of the Manchester massacre had been Palestinian and if the massacre had taken place in an Israeli auditorium, the Palestinian Authority would have paid the terrorist’s family a small fortune for murdering so many children.There is a name for people and organizations that pay other people for killing innocent civilians: it’s called accessory to murder. If the Mafia offered bounties for the murder of its opponents instead of murdering them itself, no one would sympathize with those who made the offer. Yet the Palestinian leadership that does the same thing is welcomed and honored throughout the world.The PA also glorifies terrorists by naming parks, stadiums, streets and other public places after the mass murderers of children. Our “ally” Qatar finances Hamas, which the United States has correctly declared to be a terrorist organization. Our enemy Iran also finances, facilitates and encourages terrorism against the United States, Israel and other Western democracies, without suffering any real consequences. The United Nations glorifies terrorism by placing counties that support terrorism in high positions of authority and honor and by welcoming with open arms the promoters of terrorism.On the other hand Israel, which has led the world in efforts to combat terrorism by reasonable and lawful means, gets attacked by the international community more than any other country in the world. Promoters of terrorism are treated better at the UN than opponents of terrorism. The boycott and divestment tactic (BDS) is directed only against Israel and not against the many nations that support terrorism.Terrorisms will continue as long as it continues to bear fruits. The fruits may be different for different causes. Sometimes it is simply publicity. Sometimes it is a recruitment tool. Sometimes it brings about concessions, as it did in many European countries. Some European countries that have now been plagued by terrorism even released captured Palestinian terrorists. England, France, Italy and Germany were among the countries that released Palestinian terrorists in the hope of preventing terrorist attacks on their soil.  Their selfish and immoral tactic backfired: it only caused them to become even more inviting targets for the murderous terrorists.But no matter how terrorism works, the reality that it does will make it difficult if not impossible to stem its malignant spread around the world. To make it not work, the entire world must unite in never rewarding terrorism and always punishing those who facilitate it.This article was originally published by Gatestone Institute.Follow the author on Twitter: @AlanDersh and Facebook: @AlanMDershowitz.