The Amman shooting incident at the Israeli Embassy

Hopefully, the Amman shooting incident will be solved through intensive political and diplomatic contacts before it grows to a major bilateral and regional crisis. 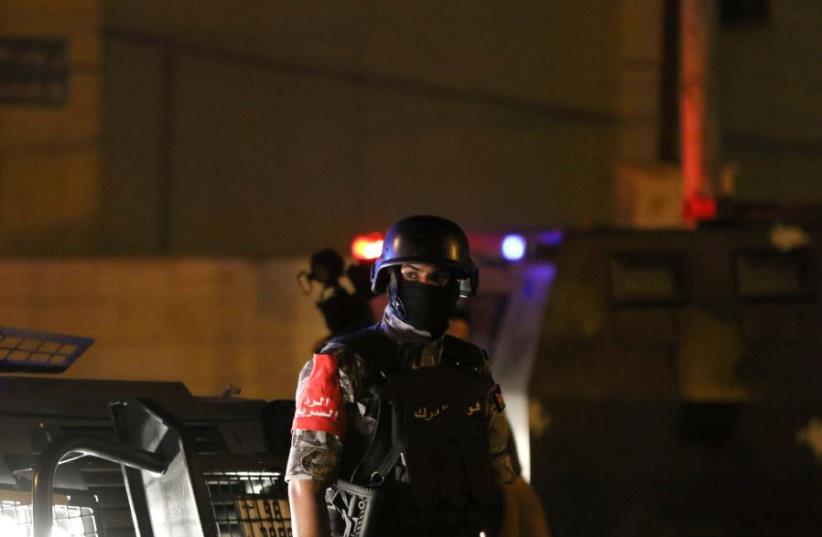 A policeman is seen near the Israeli embassy in Amman, Jordan July 23, 2017.
(photo credit: REUTERS)
Advertisement
The deputy security chief of the Israeli Embassy in the Jordanian capital of Amman was wounded Sunday night, July 23, after being stabbed by a Jordanian man who was subsequently shot dead. A second Jordanian was also wounded in the incident and later succumbed to his wounds.The shooting took place in a residential building used by Israeli embassy staff in the heavily protected embassy located in the Rabiyeh neighborhood. The two Jordanians worked for a furniture company and entered the embassy compound to carry out repairs.According to the Israeli media, the security guard acted in self-defense after being attacked with a screwdriver by a 17-year-old Jordanian, opened fire and killed the attacker. The Jordanian owner of the apartment was hit by gunfire inadvertently and later died. The Israeli was in “unstable” condition, reported news site Hala Akhbar, linked to the Jordanian military.The incident happens against the background of the Temple Mount terrorist attack and the following massive manifestations against Israel in the West Bank, Gaza and some Arab countries, including Jordan. Thousands of Jordanians took to the streets of Amman after last Friday’s prayers to denounce the Israeli measures at the Haram al-Sharif mosque compound. Jordan is the official custodian of Muslim holy sites in Jerusalem.No doubt this extremely serious event will complicate the already strained relationship between Jordan and Israel, entangled in sensitive regional negotiations to resolve the Temple Mount crisis and stabilize the situation.Jordan wants to question the Israeli guard, but according to the Vienna convention the security man has immunity from investigation and arrest.Both the Foreign Ministry and security officials are working through various channels with the Jordanian government in an attempt to contain the situation.In 1997, when Mossad intelligence officers tried but failed to assassinate senior Hamas official Khaled Meshaal in Amman, the incident provoked a serious diplomatic crisis between the two countries and the two leaders, King Hussein and Prime Minister Benjamin Netanyahu. Ties recovered after Israel delivered the antidote for the poison with which Meshaal had been injected and liberated the then imprisoned leader of Hamas, Sheikh Ahmed Yassin.The Jordanian regime is already threatened by another crisis. On July 17, a Jordanian military court convicted 1st Sgt. Maarek Abu Tayeh of the premeditated killing of three US Green Berets last November at Prince Faisal Air Base in al-Jafr, in the kingdom’s south. He was sentenced to life in prison. Since the ruling, Abu Tayeh’s tribe, the Howeitat, an important supporter of Hashemite rule, has been protesting and angrily denouncing the monarchy for the US military presence in the kingdom and criticizing the Jordanian military for “abandon[ing] [Abu Tayeh] instead of protecting him.”A recent historic example proves the difficulty of Arab regimes, even those with diplomatic relations with Israel, with regard to sustaining normal relations with the Jewish state.In September 2011, seven months after the popular uprising in Egypt, hundreds of protesters against Egypt’s ruling generals broke into the Israeli embassy in Cairo, tearing down large sections of a security wall.For hours, Egyptian security forces made no attempt to intervene.Six members of the embassy staff, who had been in a “safe room,” were evacuated from the site by Egyptian commandos, following the personal intervention of US president Barack Obama. Following the attack, the Israeli deputy ambassador remained in Cairo; 85 staff members and their families returned to Israel. Since then there is no Israeli embassy building in Cairo.In a similar incident in September 1999, in Germany, 200 Kurdish PKK supporters armed with iron bars entered the Israeli consulate in a tranquil Berlin suburb.Israeli guards opened fire, killing three intruders and wounding 14 in the worst violence after Europe-wide protests erupted over the capture of Abdullah Ocalan, the leader of the Kurdish Workers Party.They apparently chose their target in response to rumors that the Mossad had played a role in Turkey’s capture of Ocalan in Kenya. Senior representatives of the PKK in Europe later admitted to this author that the highest Greek authorities “betrayed” Ocalan and helped his arrest in Kenya. The PKK never staged terrorist attacks against Israeli targets.In contrast to the Egyptian behavior, German police arrested 30 PKK supporters and cordoned off the area, and helicopters circled over the consulate building. No Israeli guard was arrested or put on trial.Hopefully, the Amman shooting incident will be solved through intensive political and diplomatic contacts before it grows to a major bilateral and regional crisis.The author is a senior research scholar at The International Institute for Counter-Terrorism (ICT) and a senior research fellow at the Institute for Policy and Strategy at The Interdisciplinary Center (IDC) in Herzliya.