The balloon has burst

We have suffered a blow from the world, especially from our closest ally, America. Why not make judicious use of the compensation package they’re holding out to us? 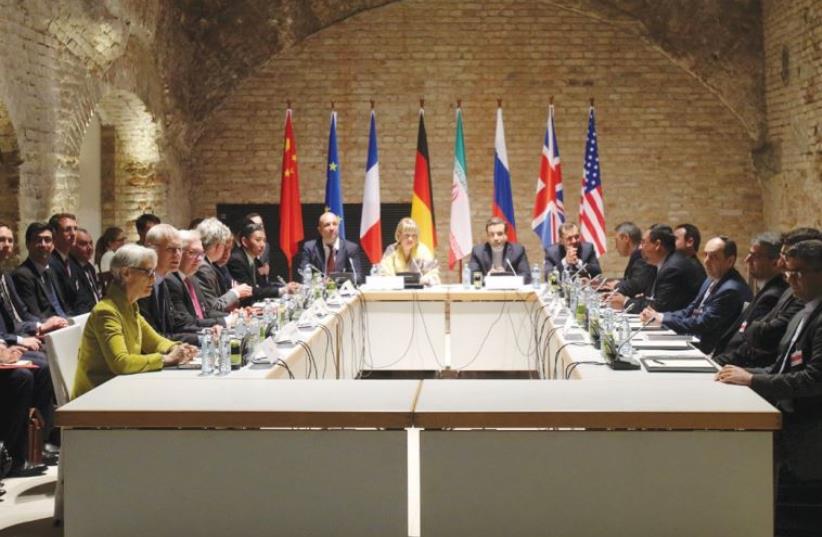 NEGOTIATORS FOR Iran and six world powers are shown meeting in the historic basement of the Palais Coburg Hotel in Vienna in April.
(photo credit: REUTERS)
Advertisement
The agreement between Iran and the world powers is a done deal. The main issue before us now is the never-ending and unresolved conflict with the Palestinians.The nursery school children sat in a circle and sang merrily: “They punished me too harshly, they sentenced me to death and then / I sat in the electric chair and said goodbye Mercedes-Benz.” It’s highly doubtful they understood any of the words other than “sat” and “chair.” Some of them might also have known what “punished” meant. As they raised her chair in the air, the girl whose birthday they were celebrating looked down happily at her excited friends – children.Our country isn’t run by children, and those who do run it ought to understand that when something is over, it’s over. Like a burst balloon, it will never again be what it once was, no matter how loud a kid yells. The agreement between Iran and the world powers is a done deal. Whining won’t make a balloon whole again, and won’t undo the agreement.
See the latest opinion pieces on our page
The question of how Israel conducted itself in the run-up to the agreement is an interesting one. Did our leaders behave wisely? Could they have done better? This will undoubtedly be a matter of considerable debate. But the more important issue now is how to deal with what is to come. Up to now, the government defined the campaign to prevent the agreement as its primary concern, its flagship policy. But that’s behind us now. The main issue before us is the never-ending and unresolved conflict with the Palestinians.
It is a rallying point for our enemies, the pretext that is turning the whole world against us, the reason for the threats from the Hague and the threats of boycotts. It doesn’t matter what atrocities are being committed in the nations around us, and it doesn’t matter that the Palestinians don’t want to and aren’t capable of signing a peace agreement, or that if they had an autonomous state in the West Bank it would look like the one they already have in the Gaza Strip. At this stage, these facts sound more like arguments for mitigation of punishment in the sentencing hearing than evidence of innocence in the trial itself. The world has already handed down a guilty verdict, and it won’t allow itself to be confused by the facts.The burden of proof has to be transferred to the Palestinians. What we should do now is offer them their own state with provisional borders on the land defined as Area A and Area B, with territorial continuity that will enable them to go from Jenin to Hebron without seeing a single Israeli soldier. And they won’t have to relinquish any of their demands. They can continue to demand the right of return, the 1967 borders, or the boundaries set by the 1947 partition plan or the 1937 Peel Commission. We have demands too, and when the time comes, they’ll all be on the table for discussion. In the meanwhile, they’ll have a state. Isn’t that what they and the rest of the world have been clamoring for all along? What’s wrong with this arrangement? We don’t have permanent borders today either.A political storm is raging around us and the winds are getting stronger every day. There is no way to hold it back. Standing with our arms stretched out and pretending it’s a pleasant breeze won’t make it so. And it poses substantial danger for Israel. Our economy is export heavy, and we can’t afford to receive the kind of treatment South Africa got. What’s more, a binational state is a much worse option. Anyone who has trouble imagining what that would look like should pay a visit to east Jerusalem – stones, Molotov cocktails, knives, hatred, death.Welcome to the local version of Libya, Iraq, or Syria. If we don’t want a binational solution and we don’t offer an alternative, we’re left with charges of occupation, oppression, apartheid, etc., which invite South Africa-style sanctions.The truth doesn’t matter in the slightest.We have to be realistic and proactive. If we don’t take the initiative, someone else will, and the result will be much harder to swallow. The extreme Left has to wake up. Nothing close to John Lennon’s vision in “Imagine” will ever come into being. Hell is all around us, and the cavorting demons will never treat us with civilized, Scandinavian-style neighborliness. The extreme Right also has to open its eyes and see the millions of Palestinians here. The secret hope that they will all move elsewhere or decide to convert to Judaism is a fantasy. It’s not going to happen.We have suffered a blow from the world, especially from our closest ally, America. Why not make judicious use of the compensation package they’re holding out to us? It’s not financial compensation we need, but American support for a “Palestinian state with provisional borders” program. The Palestinians will be forced either to accept it or to explain why they don’t want a state. More importantly, it will get the world off our back.