By enjoying the moment alongside his team, Bryant makes the past seem “real” again, essentially reliving the history of the team. 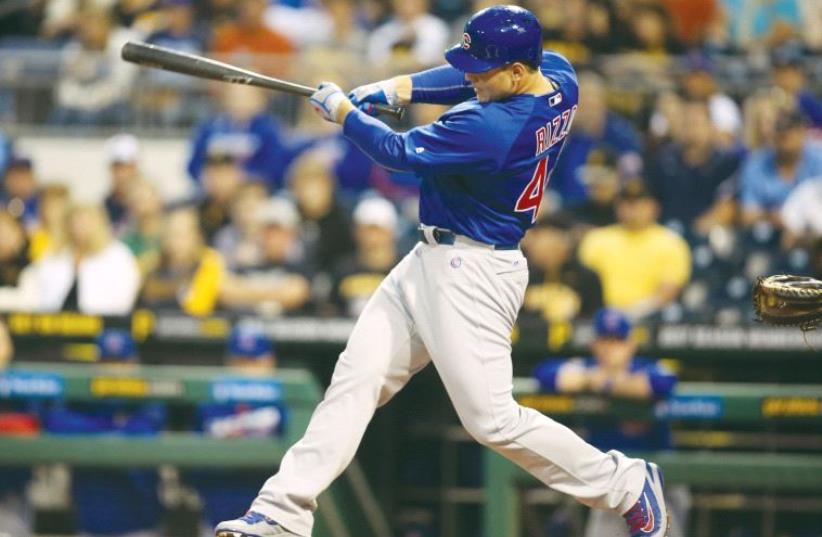 Chicago Cubs first baseman Anthony Rizzo (44) hits a solo home run against the Pittsburgh Pirates during the first inning at PNC Park
(photo credit: REUTERS)
Advertisement
Following the recent Chicago Cubs vs. Indians World Series, I was struck by how much of the discussion in the media focused on the championship drought that both teams have experienced, particularly the Cubs who have not won a championship since 1908. I wondered how the players themselves thought about it. It seemed obvious that the players wanted to win, but I wondered if the meaning of a victory – not just of the World Series itself, which is their ultimate goal, but even of one game, since they have not even played in the World Series in over 70 years – escaped them. After all, they could not possibly remember that series, and it is likely that their parents do not remember it either. But certainly, their parents, friends and communities are devoted fans who have transmitted their love for the team. In that sense, they keep that history with them, like a memory.Seen in this way, there is a striking parallel to Judaism. Particularly with ceremonial acts, but I would say also with acts of kindness and charity (which has come to be known as Tikkun Olam, literally “fixing the world,” even if that is a far cry from the original Mishnaic usage of the term), Jews are practicing what they have received from their parents, teachers and community. But they are also aware of the history behind those acts, and they access that through memory.Yosef Hayim Yerushalmi writes in Zakhor: Jewish History and Jewish Memory that memory for Jews is often not recollection, but “re-actualization,” a “fusion of past and present.” By ritualizing past with others in the community, events are not recounted, but relived. For the players of the Chicago Cubs, who are playing together with their teammates and surrounded by their devoted fans, this series is also about a sense of reliving of an earlier time. Exactly that sentiment emerges from Kris Bryant, the third baseman. According to Sports Illustrated he said: “It’s important to enjoy this stuff. It’s not going to be every year you’re going to be in the World Series. When those thoughts [of 1945] come in your head, realize that they’re there and that they’re real and that it’s a special time.”By enjoying the moment alongside his team, Bryant makes the past seem “real” again, essentially reliving the history of the team, not unlike the way Yerushalmi describes what ritual does for Jewish memory. Yerushalmi’s work is based in part on the thought of Maurice Halbwachs, who wrote about the notion of collective memory, or the idea that memory is constructed only with reference to our social surroundings.For the Chicago Cubs, all this reinforces the value of teamwork – the players can only share their history by working together. For Jews, this highlights the importance of community: if our memory only exists by virtue of our community, our responsibility to remain a part of it is that much greater.Jonathan Milevsky is a PhD student in religious studies at McMaster University, Hamilton, Ontario.