The Danger of the United States Losing to North Korea

The US, even if it wished to assume the mantle of the world order guardian, is incapable of fulfilling the task by political and economic means and needs the cooperation of other major players. 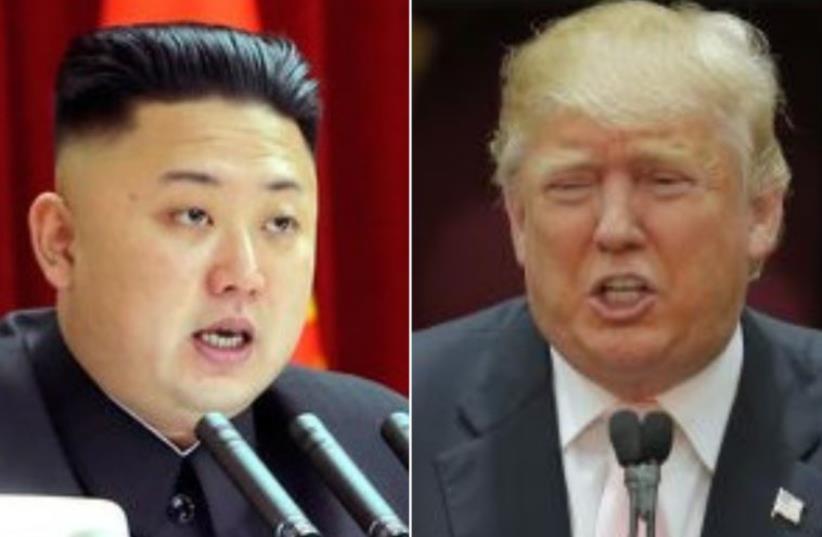 N. Korean leader Kim Jong-Un (L), U.S. President Donald Trump
(photo credit: REUTERS)
Advertisement
The North Korean audacious nuclear and ballistic activity in recent years poses serious and far-reaching consequences and challenges to world order and stability and mostly to the United States. The obvious one is the collapse of the Non Proliferation regime which may affect the future of the 2015 Joint Comprehensive Plan of Action with Iran.There are three major ways of dealing with a rogue state –the political, either by means of subversive actions aimed at regime change or at least forcing it to change course. Secondly, the economic pressure through sanctions and ultimately, the hybrid military pressure which include subversive warfare by cyber and other means.The US, even if it wished to assume the mantle of the world order guardian, is incapable of fulfilling the task by political and economic means and needs the cooperation of other major players, mostly those which cooperated in reaching the JCPOA and especially China and Russia which border with North Korea agreed. While these two agreed to UN Security Council resolutions imposing sanctions on North Korea they comply with it only half-heartedly leaving breathing space to the Kim Jong-un regime. The political and economic pressure have obviously failed to deter North Korea from pursuing the nuclear/ballistic campaign.That is almost an ideal situation for China, Russia and North Korea and unenviable for the United States. It is easy for Trump to threaten fury and fire and almost impossible to take action. Even if he does not intend to seek the US Congress prior approval, the US needs to consult Japan and South Korea as these two stand to bear the major brunt of the North Korean reaction to any military operation taken by the US The probability of thousands of casualties and vast damage to infrastructure has thus far been a major factor in keeping the military means of stopping North Korea a remote possibility.Enter the Chinese diplomacy in the service of China's long term strategic goal of removing the US military presence and political presence in Asian side of the Pacific Ocean. This objective overlaps the North Korean one as the regime wishes to remove the American threat to its survival. A Chinese (and Russian) "friendly persuasion" of North Korea may produce a deal in the center of which is a North Korean readiness to freeze nuclear/ballistic activities and a US gradual reduction of forces in eastern Pacific. Trump's initial reaction is predictable if the US has no better or acceptable response, Japan and South Korea may be willing to at least consider the pros and cons of the Chinese initiative, if it emerges. What is at stake is therefore the sustainability of an effective non-proliferation order and the global balance which has existed between the major powers such as the US China and the Russia. In the attempt to preserve its credibility supremacy ,influence  and role the US is faced with wily brinkmanship players. Fire and fury  may not immediately deter them. Quiet, remotely controlled ,not necessarily inflammatory, actions may be an efficient initial response. This proposed line of action needs to be composed of several stages as the first ones may not produce the desired results. That term," desired results" needs a precise definition but for now a mere North Korean entry into negotiations which are not based on US or others' concession will do.Lastly, there is only an artificial resemblance between the North  Korean  and Iranian cases. Two different regimes, different societies, different neighbors and at different stages in their nuclear programs. A failure however, to give an adequate response to the North Korean challenge and mostly the US failure at that, may result in the un-framing of the JCPOA .Oded Eran is a veteran Israeli diplomat and a senior researcher at the Tel Aviv Institute for National Security Studies (INSS).