The DNC hackers and their backers

It appears now that the Russians are making a bold attempt to get a finger in the US election pie. We will see who comes up with the plum when the polls close on November 8, 2016. 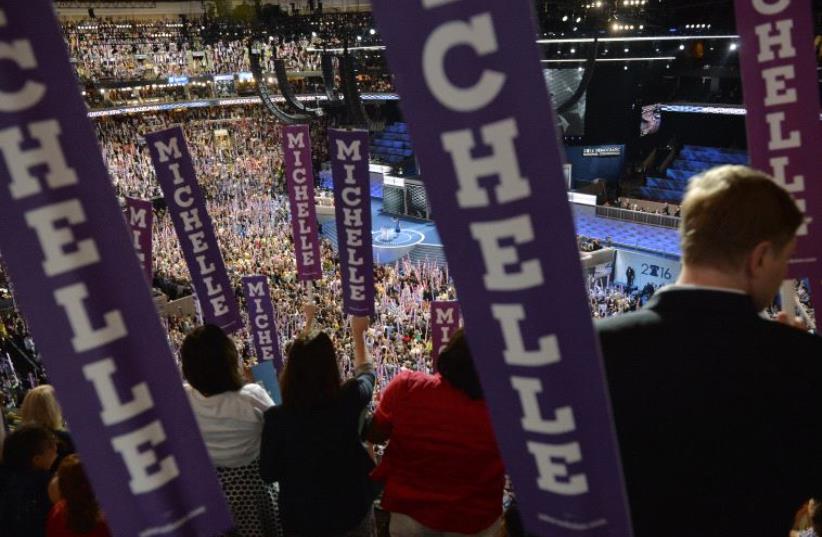 2016 Democratic National Convention, DNC
(photo credit: REUTERS)
Advertisement
Confusion, last week thought to be a poster child of the Republican National Convention, has found a fissure in the Democratic Party this week in Philadelphia, aka the City of Brotherly Love and Sisterly Affection.Some of the brothers and sisters aren’t feeling so affectionate, as demonstrated by the pro-Sanders protests.Why the turmoil? It was revealed just hours before the start of the festivities that 19,000 emails had been retrieved from Democratic National Convention (DNC) servers by Russian hackers.Now, the question is being asked: just what ties do Russian President Vladimir Putin, Hillary Clinton, Donald Trump and the presidential race have? Some of the emails released by Wikileaks indicate that the campaign of presidential hopeful Bernie Sanders had been sabotaged by DNC chairwoman Debbie Wasserman Schultz. In the emails, Sanders’ religion, veracity and credentials as a Democratic candidate were challenged or maligned.The hacking theft of DNC emails could be said to be a strategic state-sponsored attack against a major US corporation, ranking alongside Chinese hacks of the Office of Personnel Management and the incursion into Sony Pictures Entertainment’s website. What significance would be attached to the DNC raid? The answer to that question could raise hackles given the work of Trump’s campaign chair Paul Manafort for president Viktor Yanukovych, the pro-Russian Ukrainian leader. The Trump connection is quickly gaining credence in the Obama administration.The Clinton campaign has indicated it was likely an attempt by the Russians to bolster Republican nominee Trump.Although the entire affair has proven to be another embarrassment for Clinton – following yet another recent email brouhaha – and a nail in the coffin of the plan to win over Sanders followers, what could the hackers have hoped to achieve? The tampering may be the result of a charge by Clinton that Putin’s intervention in Ukraine was akin to those of Adolf Hitler prior to World War II. The Russian leader responded with deprecatory remarks about Clinton’s ability as a female to handle political challenges.There was certainly no love lost between Putin and her husband and former president Bill Clinton, who was intent on transforming Russia before his term in office ended. The idea that Hillary wanted to finish what Bill started is still circling out there.Crowdstrike, a security research company, has been researching the DNC computer system for the past 12 months. Its representatives detected a substantial breach in the system.Co-founder Dmitri Alperovitch revealed that, “They infiltrated DNC’s network last summer and were monitoring their communications, their email servers, and the like.”According to Alperovitch, the hackers seemed to be most interested in gaining access to files dealing with attempts to contain Trump’s campaign. Crowdstrike has indicated that two groups worked together, one for Russian military intelligence circles and the other an agency that was once under the direction of Putin. He has, of course, denied any connection with the hackers.Is this the first time a foreign government has been implicated in trying to influence a presidential campaign? Certainly not. When incumbent Jimmy Carter was challenged by Ronald Reagan, the Iranian government purportedly had a finger in the election.I am reminded of an encounter I had with Isser Harel, the head of Mossad from 1947-1963, at a dinner in his home on September 23, 1980. It was just a few months before the US presidential election. On that night I asked Harel, “Who do you think will be the next president?” Harel responded, “The word on the street is that Iranian terrorists might have a say about the outcome. They will attempt to influence the election by releasing the hostages precisely when Reagan is sworn into office. They want Carter out because of his challenges to Islam.” The former intelligence officer was referring to the Camp David accords and Carter’s insistence that Egyptian president Anwar Sadat give a speech in his home country stating that religion and politics must be separate.Harel’s statement would become clearer when, on January 20, 1981, Ronald Wilson Reagan was sworn in as the fortieth president of the United States.As the newly-elected commander in chief completed his 20-minute address to the crowd gathered in Washington, DC, the remaining 52 US hostages were released after having spent 444 days in Iranian captivity. At that moment my phone rang. It was Reuven Hecht, adviser to president Menachem Begin.He shouted, “Harel is a prophet!” What few knew would later come to light: at 4:31 a.m. on the morning of the Reagan inauguration Jimmy Carter had $7.9 billion dollars wire-transferred through a series of banks, including the Federal Reserve, to the Bank of England. The funds to buy the hostages back were from money that had been controlled by the shah of Iran.At the same time, the president signed the Algerian Accord, committing the United States to respect Iran’s territorial integrity and not to attack it. That little stroke of the pen still haunts and fetters the US in the Persian Gulf region.The Iranians worked to foil Carter’s plans for reelection, apparently seeing Reagan as a weakling, an actor with little political savvy. The thought a man such as that in the White House would bode well for them.It appears now that the Russians are making a bold attempt to get a finger in the US election pie. We will see who comes up with the plum when the polls close on November 8, 2016.The author is a No. 1 New York Times bestselling author. His book Islamic Infidels is available at www.Timeworthybooks.com.