The Dutch care about their Holocaust survivors

These days, much is being written about Israel’s relations with European countries. 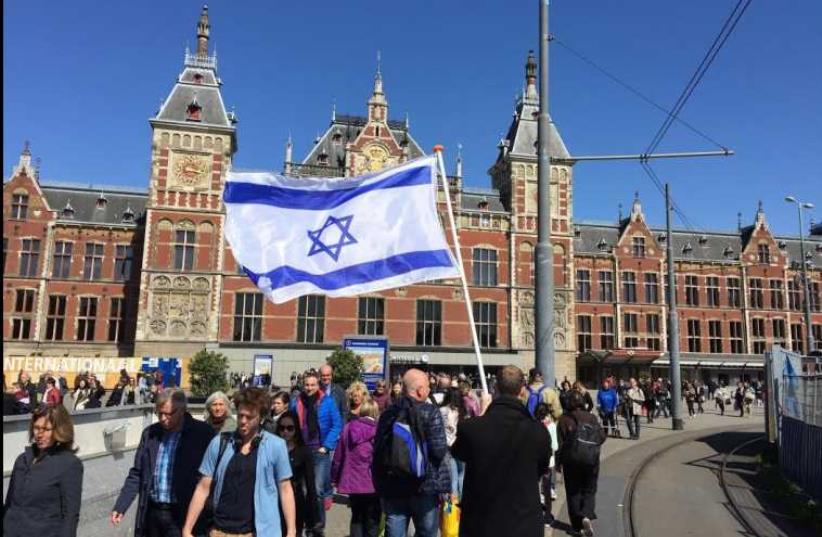 A fellow church member walking through Amsterdam with the Israeli flag
(photo credit: Courtesy)
Advertisement
These days, much is being written about Israel’s relations with European countries.However, sometimes this coverage is excessive and inflammatory.As an avid reader of The Jerusalem Post, the editorial of May 17 (titled ‘Dutch shame’, published online May 16) struck me as such a case.The piece amplified an unfortunate, specific case into a diatribe of outrage against the Netherlands, a country that can still be considered one of Israel’s best friends. The editorial, which expressed concern about a pension for a Dutch citizen who is a Holocaust survivor, ignored the Post’s own reporting of several days before (May 12), which had been factually correct.See the latest opinion pieces on our page
The Netherlands cares about its Holocaust survivors. It has a long tradition of special allowances for Dutch survivors. Through the Victims of Persecution Benefits Act of 1972 and other legislation, it sets a high standard in the level of care that is provided to the victims and the resistance fighters of the Second World War. The Dutch Embassy is involved in the implementation of this legislation in Israel, and does so with special attention for the approximately 1,300 Dutch survivors living here. I personally stay in touch with many of these remarkable people, attend their meetings and have brought visitors from the Netherlands, including our prime minister, to their homes to meet them.Apart from specific entitlements for Holocaust survivors, the Netherlands transfers child benefits, pensions for people over 65 years old and other remittances on a large scale. The full benefit of these allowances is limited to countries with which the Netherlands has a formal treaty on social security, as it has with Israel. Contrary to the citizens of most countries (including of Israel), Dutch citizens moving abroad can keep most of their entitlements, but if they move to countries with a lower cost of living or to countries or areas with which the Netherlands does not have a social security treaty, some of these can be affected.Indeed, if a Dutch citizen would move to Ramallah, he would see his benefits limited, as the Netherlands does not have a social security treaty with the Palestinian territories.The specific case mentioned in the editorial involved a general pension for someone over 65 years old, not an allowance to which she is entitled as a Holocaust survivor. Nevertheless, as soon as the embassy learned that this pensioner received a letter from the authorities in the Netherlands informing her of a cut in benefits, it immediately contacted the responsible Dutch institutions. The Dutch government considers the receipt of this letter a very unfortunate incident, which should have been avoided. Since the person involved could not have been aware of the consequences of moving to the territories for her entitlement, her pension will not be reduced. The Dutch Ministry of Social Affairs and Employment made it known that it will soon publish a new policy. As ambassador, I have always done my utmost to prevent Holocaust survivors from being affected by cuts in entitlements, and will continue to do so.Moreover, it struck me as bizarre that the Post editorial lumped the Dutch government in a category of “governments which adopt the softest of attitudes to Islamic terrorism and the Iranian nuclear menace....” It seems far-fetched for the editorial writer to link attitudes toward Islamic terrorism and a single pensioner’s entitlement, whose case is being rectified. In fact, the Netherlands was one of the first to join the international coalition to fight ISIS. Dutch F-16 fighter jets are bombing ISIS as we speak, while Dutch troops on the ground are training Iraqi special forces and peshmerga units against ISIS. In addition, 400 Dutch military personnel are serving in Mali, in another difficult mission. When it comes to combating the threat of Islamic terrorism in the Netherlands, the full spectrum of legislation and action is deployed. On Iran, Dutch diplomacy was instrumental in bringing about two very tough sanctions packages adopted by the European Union several years ago, and has helped maintain the pressure on the regime in Tehran. The Post, which aspires to be well-informed on diplomatic affairs, should have been aware of this.Lastly, let me reiterate how much I regret the particular incident which apparently triggered the editorial. As the Dutch ambassador to Israel, I have worked tirelessly to engage with the special and amazingly inspiring community of Dutch survivors of the Shoah, extending to them all the support I can, and have made this one of the strategic priorities of the embassy’s work. The people in whose name your editorial professed to speak, know this.The author is the ambassador of the Netherlands to Israel.
Advertisement
Subscribe for our daily newsletter