The education minister has just taught his first lesson

Naftali Bennett deserves a medal of honor from the Religious Zionist community. 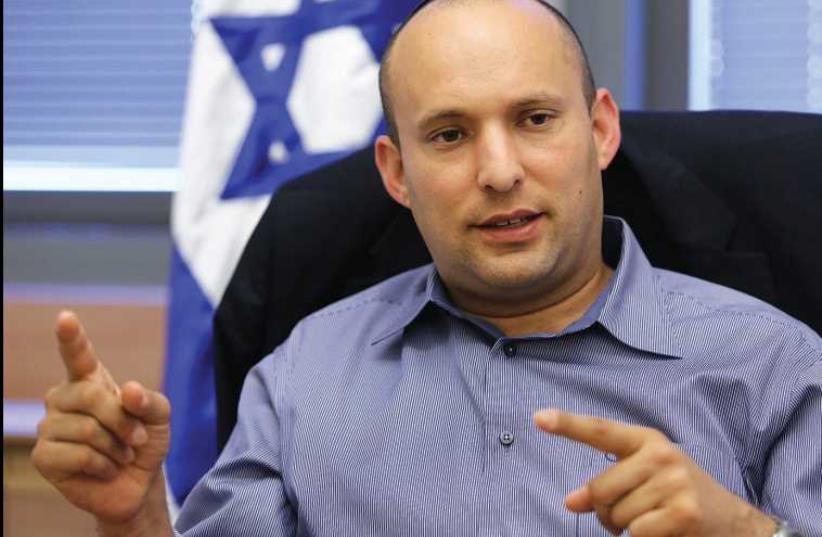 Naftali Bennett
(photo credit: MARC ISRAEL SELLEM/THE JERUSALEM POST)
Advertisement
Naftali Bennett deserves a medal of honor from the Religious Zionist community. At the penultimate moment o f our drawn-out election season, he snatched victory for the Religious Zionist community from the jaws of defeat. But instead of being applauded for his accomplishments, Bennett was roundly and publicly excoriated by Rabbi Yosef Blau, the president of the Religious Zionists of America and a rabbinic figure of international renown, in a Jerusalem Post op-ed on May 14. In his essay, Rabbi Blau cast Bennett in the role of the grim reaper carefully supervising the demise of Religious Zionism.Rabbi Blau’s characterization of Bennett’s role as the chairman of the Bayit Yehudi Party which currently leads the Religious Zionist community could not be more wrongheaded. Since being elected to the post, Bennett has slowly but inexorably shepherded the Religious Zionist community across the great divide of the Israeli political system. This divide separates Israel’s sectorial movements, camouflaged as political parties, from its genuine national political movements.The sectorial movements operate primarily as interest groups who articulate little beyond the narrow and specific needs of their base community, needs which they seek to satisfy through raw political horse trading.To be sure, our national political movements also respond to the demands of their base supporters. But that base comprises individuals from a variety of social sectors with needs that cannot be neatly and efficiently categorized. What unites the base supporters of our national political movements are their national commitments and especially their willingness to shoulder the burdens of national responsibility. By gently nudging the Religious Zionist community away from its sectorial posture without forfeiting any of its traditional concerns, Bennett completed a transformation that has been long in the making. He brought Israel’s political system into alignment with its military structure, which for decades has been measurably strengthened and significantly sustained by the dedication, commitment and sacrifice of soldiers drafted from the National Religious community.
See the latest opinion pieces on our page
As it happened, Bennett found himself in an unprecedented power position on what was, by law, the final day for Benjamin Netanyahu to craft a ruling parliamentary coalition. And like any good politician, Bennett converted his power position into an opportunity to extract maximal concessions from Netanyahu and his Likud bloc for his community and his party.Thus, Bennett demanded and received increased budgets for the two ministries which Netanyahu had already assigned to Bayit Yehudi. He demanded and received control of the civilian authority attached to the Defense Ministry which governs daily life in the Jewish settlements located across the Green Line. And he demanded and received a pledge of additional funding for the Settlement Division of the World Zionist Organization. In short, and in the parlance of American electoral politics with which Rabbi Blau is surely familiar, Bennett did not hesitate to use his political advantage in order to “put a roof on [his] church.”But Bennett demanded more than just largesse in exchange for his support. He also demanded that Netanyahu assign control of the Justice Ministry to Bayit Yehudi, a demand which Netanyahu tried to resist with all of his waning might.Netanyahu understood, as does Rabbi Blau, that this demand was calculated to lift the party into the higher tier of the impending governing coalition, right alongside of the Likud bloc and its newest satellite party, Kulanu. For Rabbi Blau, this change means that Bayit Yehudi has abandoned his zone of comfort which he neatly characterizes as providing the entire Israeli army with kosher food. And for Rabbi Blau, his zone of comfort establishes the limits beyond which Religious Zionism dare not reach.Apparently, Netanyahu shares Rabbi Blau’s vision of the proper place of Religious Zionism – as opposed to Religious Zionists – within the modern Jewish state, albeit for exactly opposite reasons. Rabbi Blau’s problem is that the development of Bayit Yehudi into a genuine national party will compel it to abandon its traditional religious concerns in favor of secular nationalist ones. Prime Minister Netanyahu’s problem is that it won’t. If it were otherwise, if Netanyahu believed in the impending demise of Religious Zionism, then he would have happily added the Justice Ministry to the portfolio of ministries assigned to Bayit Yehudi, especially after Bennett made it clear that he would turn over ministerial authority to Ayelet Shaked, the party’s leading secular representative.Netanyahu is keenly aware that in our recent election, a significant percentage of his votes came from members of the Religious Zionist community who abandoned Bennett after Netanyahu abandoned his commitment to the “two state solution.”Since the election however, Netanyahu has recommitted himself to that policy, and for very good reason: Netanyahu is the head of a secular Zionist party and there is simply no secular justification for Israel to maintain control over all of Judea and Samaria, or at least none that can win the day in our current uni-polar world which is dominated by just one superpower, the United States of America.There is, however a strong religious case to be made. Moreover, it is a case that can be presented in a clear and decisive secular voice. But only a Religious Zionist party – as opposed to religious Zionists – would be able to present that case in a compelling fashion.As far as I can tell, Bennett and Bayit Yehudi have yet to design that case or fashion that voice. But when they do, as they must if they intend to continue their march to the top of our political system, they will need the assistance of men like Rabbi Yosef Blau, who learned from Rabbi Joseph B. Soloveitchik that the Jewish religion has an important role to play in the modern world, a role that stretches way beyond the confines of the modern kosher kitchen.The author teaches history at the Hebrew University’s Rothberg International School and is the rabbi of the Rimon synagogue of Efrat.