The book captures the full horror of suffering Jewish children whose homes were under attack. 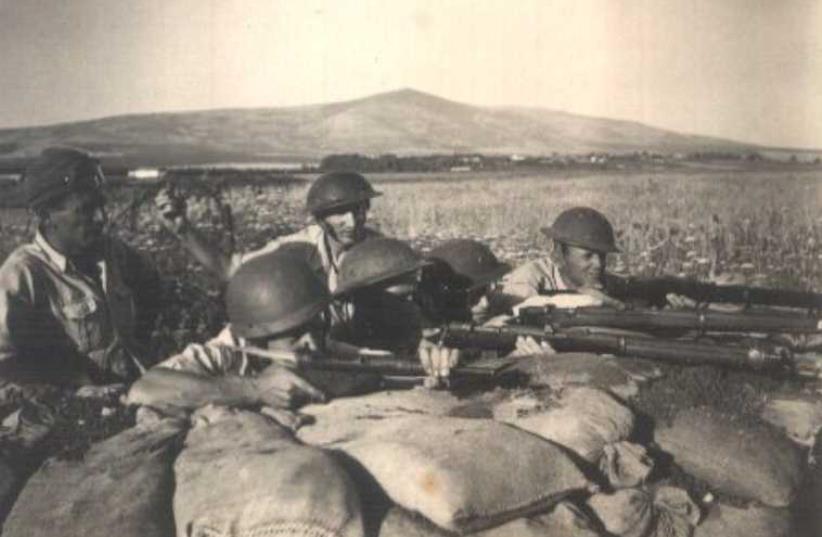 War of Independence
(photo credit: Wikimedia Commons)
Advertisement
70 years ago, war ravaged what was, until May 15, 1948, the British-ruled “Palestine Mandate.” As is common in war, many civilians were uprooted. This well-publicized fact is the heart of the Great Debate over the justice or injustice of Israel’s founding. Arguments rage over the number of Palestinian Arab refugees – anywhere from 300,000 to 800,000 – and the causes of their dispossession.However, a lesser known fact is that between 10% and 20% of “Palestinian” refugees were Jews. Not the 400,000-800,000 Jews who fled or were driven from Arab countries during the same time, but Palestinian Jews – or Israelis, as they were later called.I first encountered this surprising fact in Benny Morris’s book 1948, where he puts the number of Jewish refugees at 70,000 but provides little discussion as to why the number is so large.I asked acquaintances whom I consider to be knowledgeable, how many Jewish refugees the war created and all believed only few hundred to a couple of thousand – considering only the most devastating defeats, like the fall of the Old City of Jerusalem and the Etzion Bloc.I wondered whether Prof. Morris, among Israel’s most valuable and important historians, made a mistake in citing such a high number, or perhaps a typo – may be he meant 7,000?Enter Dr. Nurit Cohen-Levinovsky, a historian with the Rabin Center and author of Jewish Refugees in Israel’s War of Independence (Hebrew). Her book supports Morris’s claim – she estimates closer to 60,000 Jewish refugees – and provides a broad analysis of the causes and scope of that Jewish flight.Her book examines the issue from all angles. It captures the full horror of suffering Jewish children whose homes were under attack, their parents desperately trying to save them, fighting off the attacks on their homes, worried sick for their spouses and/or children and sweltering in make-shift shelters only a few hundred yards away from the front lines.She describes how Jewish refugees, especially from villages attacked by Arab armies (primarily from Syria, Jordan and Egypt), clogged Haifa and Tel Aviv, even as those cites themselves came under attack, causing many city residents to flee the fighting near their homes to “safer” areas, straining social services sometimes to the breaking point.COHEN-LEVINOVSKY further describes the on-going debate whether non-combatants, especially the children, should be evacuated. Some villages adamantly refused to evacuate the children until regular Arab armies invaded once the British left, and then resorted to desperate measures to save their children. Kibbutz Manara, on the Lebanese border, evacuated its children under enemy fire by having soldiers carry the drugged children inside vegetable crates. The 1961 movie Exodus recreates a similar scene on the fictional kibbutz Gan Dafna, – undoubtedly inspired by the real experience of Manara and other kibbutzim that resorted to similar risky evacuations.Some villages allowed teens as young as 13 to remain and serve as runners, several becoming casualties themselves. Several villages in the Negev mounted “Mivtza Tinok” (“Operation Baby”) to evacuate the children from the entire area as the Egyptian army invaded. One village loaded its children on trucks and drove out on the main highway, failing to notify the local defenders. One of these mistook the trucks for enemy transport, and was about to launch a Molotov cocktail attack on the convoy when he heard children crying and withdrew, narrowly avoiding an awful tragedy.The book includes poignant testimony from a kibbutznik bringing Jewish refugee children into Haifa. As he drove into the lower city, he saw large numbers of vehicles loaded with household goods driving in all directions – some belonged to Arab families fleeing from Haifa, others to Jewish families fleeing to Haifa. Another kibbutznik bringing Jewish refugees describes being directed to seek shelter in the houses of Arabs who recently fled Haifa and were now refugees themselves. In some of these, still-warm meals were set out on the tables.In all, according to Cohen-Levinovsky, some 97 Jewish villages were attacked and damaged: 11 of these were destroyed entirely, 6 were conquered and lost – until after the 1967 Six Day War, when those conquered were re-established.However, most refugees came not from remote villages but from the cities, particularly Jerusalem. Home to 100,000 Jews who comprised a sixth of the entire Jewish population, the city hosted the bloodiest and most intense fighting of the war. Fully one quarter of Jerusalem’s Jews fled, mostly to the relative safety of the coastal plain.After the war, Jewish refugees – who, unlike Arab refugees, could not flee to a neighboring country – returned to their homes if they were still standing, or rebuilding them or being resettled within the state, perhaps after short stays in Israeli refugee camps (called “ma’abarot” or “transit camps,” sheltering mostly new immigrant Jewish refugees from Europe or Arab countries.Many Arab refugees, on the other hand, who had fled the country altogether or relocated to those parts still under Arab control (Gaza and the West Bank), were forced to remain in similar refugee camps that, inconceivably, still exist.The suffering of those Palestinian Arabs who remained refugees for far longer than their Jewish counterparts – while unspeakably and unforgivably tragic – overshadows but does not negate the similar suffering the Jews of Palestine-cum-Israel endured during the same war – a war the Jews did not seek or start, a war that claimed the lives of fully one percent of the entire Jewish population, and left tens of thousands wounded, homeless or bereaved.Dr. Cohen-Levinovsky deserves to be recognized for the important contribution she has made to the historical record, illuminating a dimly-lit corner of the history of Israel and the Jewish people.