The German media and the demonization of Israel

Nazi Germany demonized the Jews by claiming that they were an inferior race. Tens of millions of contemporary Germans demonize Israel by viewing them as Nazis. 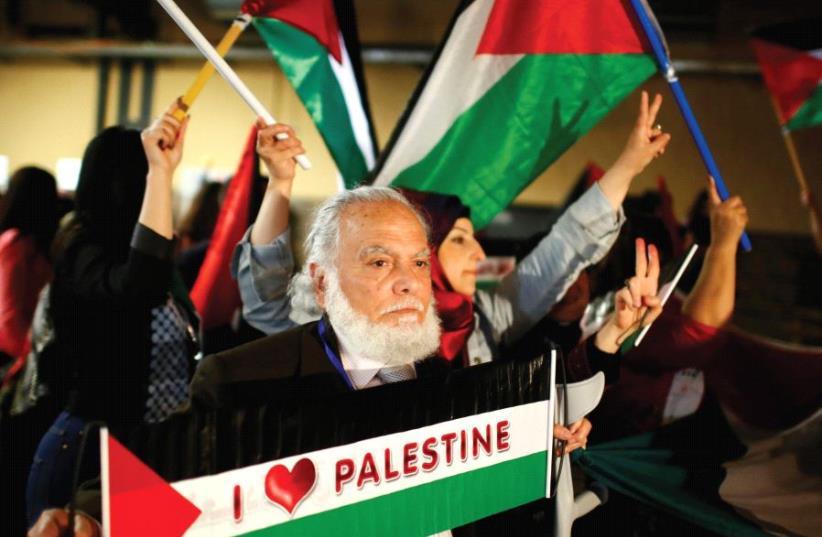 PEOPLE HOLD Palestinian flags during the Conference of Palestinians in Berlin in 2015.
(photo credit: REUTERS)
Advertisement
ARD, the first German Public Broadcasting network, has added new manipulations to the saga of the antisemitism documentary Chosen and Excluded – The Hate for Jews in Europe, co-produced by Joachim Schröder and Sophie Hafner. The EU-subsidized German-French public TV station ARTE had commissioned this documentary through WDR, an ARD member.As far as is known, initially WDR did not raise any objections about the documentary before passing it on to ARTE. The latter, however, rejected the movie claiming that it had professional shortcomings and did not meet contractual terms.Thereupon, the largest German national daily, Bild, broadcast the documentary online for 24 hours – for which it had no copyright. Thus this documentary was uploaded to YouTube. In response to the growing publicity around the censorship scandal, ARD decided to air the documentary late on the evening of June 21.The film was maimed by WDR in an unprecedented way. There was an introduction that directed viewers how to view the documentary; in addition WDR added frequent inserts questioning the veracity of elements of the film. Furthermore, the day before the broadcast, WDR posted a “fact check” on its website listing close to 30 “errors” or “untruths” in the film. Some of these “fact checks” are baseless at first glance. Many others are convincingly contested.Moreover, NGO Monitor wrote a letter to WDR detailing that the broadcaster had defamed it in their fact check. NGO Monitor asked for an immediate retraction of these remarks.Thereafter, ARD added yet another manipulation.Following the broadcast of the documentary, a panel discussion was held with the well-known talk-show host Sandra Maischberger. The producers of the documentary, however, were not invited to participate.The panel was unbalanced. It did include three prominent critics of Israel versus two pro-Israel experts.Moreover WDR’s chief broadcasting executive, Jörg Schönenborn, represented his station.The quality German daily Die Welt wrote that only the two pro-Israelis among the panelists could be considered experts: historian Michael Wolfssohn and Israeli-Arab Ahmad Mansour, now living in Berlin.The article said of the latter: “hardly anybody knows more than he about Islamic antisemitism in Europe.”About the others it said: “Rolf Verleger [a professor of psychology] qualified only because he is a Jew who criticizes Israel.”There was also a German journalist, Gemma Pörzgen, “an expert on apartheid policies in South Africa and about Eastern Europe.” She had already heavily criticized the movie on Facebook. The other anti-Israeli panelist was former Christian Democrat federal minister Norbert Blüm. Die Welt wrote: “He was there because he is always there. And because he has profiled himself as an Israel critic.” Blüm is also an indirect Holocaust inverter. In 2009 he linked Nazi persecution of the Jews with atrocities against Palestinians.In 2002, Blüm stated that the Jewish state was conducting a “Vernichtungskrieg” against the Palestinians.This is a German expression for a war of extermination.Many decades before the Second World War invasion of the Soviet Union, this term was used for the German genocide of the Herero tribe in South West Africa.Blüm’s inciting and false statement about Israel represented the opinion of a large majority of Germans at that time. In 2004, the University of Bielefeld undertook an opinion poll in Germany asking if interviewees agreed with the statement that Israel was conducting a war of extermination against the Palestinians. Sixty-eight percent of those interviewed agreed.Two additional studies were carried out by the same university in 2011 and 2014. The number of Germans who agreed with the statement had decreased to 48% and 40%, respectively. Additional polls by The Bertelsmann Foundation and the University of Bielefeld asked whether people agreed with the statement that Israel is acting toward the Palestinians like Nazis acted toward the Jews. The number of Germans who agreed with this was more erratic. In 2004, 51% of respondents agreed, while in 2007, 30% of respondents agreed. In 2014, 27% agreed and by 2015 the percentage of those interviewed had increased to 41%.If Blüm and the large number of Germans who believe as he does were correct in their perception about the invented Israeli “war of extermination,” the filmmakers could not have shown any Palestinian patients being treated during visits at the Hadassah Hospital in Jerusalem. During WWII it took the Germans only two years to murder two million people, predominantly Jews, in three extermination camps: Treblinka, Sobibor and Belzec.Nazi Germany demonized the Jews by claiming that they were an inferior race. Tens of millions of contemporary Germans demonize Israel by viewing them as Nazis. In many other European countries a similar demonization of Israel takes place. However, there both the media and politicians are complicit in having created this atmosphere.In Germany, most politicians, except a few from the mainstream – like Blüm or incidentally the country’s Socialist Foreign Minister Sigmar Gabriel, and some from the Left Party – have been reluctant to use extreme verbal incitement against Israel.Since people are not born Israel-defamers, it is evident that Germany is a country where the huge demonization of Israel mainly originates from part of the broadcasting and media companies. By its unprecedented maiming of the documentary about antisemitism, ARD has greatly damaged an important attempts to counteract this demonization.The author is emeritus chairman of the Jerusalem Center for Public Affairs. He was given the Lifetime Achievement Award by the Journal for the Study of Antisemitism, and the International Leadership Award by the Simon Wiesenthal Center.