The Human Spirit: Back from the abyss

Ben-Gurion Airport hadn’t been opened on Yom Kippur for seven years; VitalOne, friends and family began securing the permissions and assembling the crew. 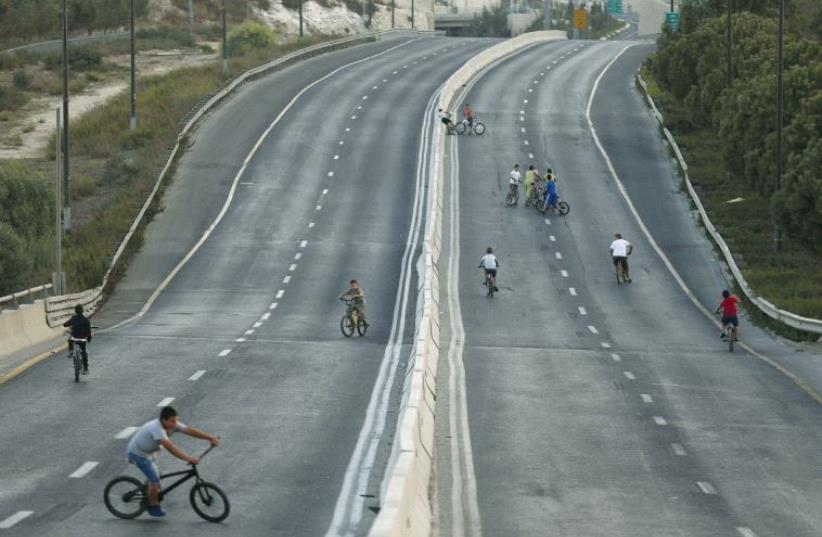 Children ride their bicycles in an empty street in Jerusalem (illustrative)
(photo credit: MARC ISRAEL SELLEM)
Advertisement
For those who have never experienced Yom Kippur in Israel, it’s hard to imagine the silence. No background buzz of traffic. Kids on bikes and trikes take over the highways. Stores are shuttered. The national radio and TV stations stop broadcasting.So it was on Yom Kippur, October 11, 2016 – until breaking the silence was a matter of life and death.On Monday evening, October 10, Noa and Hanoch Greenfield and their four children –Yiftah, 11; Ahinoam, 10; Ivri, seven; Nevo, five – from Ma’aleh Michmash northeast of Jerusalem were on a family vacation in the Republic of Georgia.More than 60,000 Israelis traveled to the Republic of Georgia last year. Israelis like to hike. They love nature. There’s a Jewish community with synagogues, a kosher restaurant called Jerusalem.The Greenfields were in Tusheti, northeast of the main ridge of the Great Caucasus that border Dagestan and Chechnya. Hanoch Greenfield, 42, was driving the large, four-wheel-drive vehicle when visibility turned bad. He inched along, 10 km. an hour, eager to get to lodgings. Then suddenly, disaster.The jeep slid off the narrow road, tumbling into a ravine 80 meters deep.When the movement stopped, Hanoch thought he was dead. It was cold, dark and silent. Near him, Ahinoam – named for his brother killed in Lebanon – was lifeless. So was Nevo. Then Hanoch heard Ivri calling, “Abba, abba!” Yiftah was seriously injured. So was Noa. She couldn’t move her legs. Hanoch crawled up the hill, pulling himself over a steep wall. He saw headlights in the distance – his only hope. In desperation, he made the Georgians understand. Rescue began.They were driven 200 km. over pitted roads.The Georgians were devoted, but Noa and Yiftah needed the more advanced medical care available in Israel. How would they get home? Tuesday was Yom Kippur eve. Ben-Gurion Airport closed around 2 p.m. Even emergency evacuation planes weren’t running.A resourceful family friend contacted VitalOne, a medical transport company in the US run by Rabbi Isaac Lieder.They would need permission from Civil Aviation and the Israel Airports Authority, the Transport Ministry and the prime minister. They would need two pilots, a medical team, a plane and 1,000 gallons of fuel. They needed airport staff.Ben-Gurion Airport hadn’t been opened on Yom Kippur for seven years.VitalOne, friends and family began securing the permissions and assembling the crew.Dr. Ami Mayo, director of the surgical critical care general and trauma surgery at Haifa’s Rambam Medical Center and an IDF flight surgeon would go, as would Chagai Bar-Tov, MDA, a tactical flight paramedic from Efrat. So would Dr. Josh Schroeder, a Hadassah Medical Organization orthopedic surgeon spine specialist who lives in Modi’in.Dr. Schroeder is my son.I’d wished him a quiet Yom Kippur.With the country in slow motion, he might get to spend the day in synagogue with his wife, Yaira, and their three children. As they sat down for the pre-fast meal, Josh’s phone rang. Did he know a colleague in Georgia who could handle complex neck surgery? Images of the injury were forwarded to his phone. He consulted colleagues with experience in the former Soviet Union. The consensus: the injured needed to return to Israel, and as soon as possible. “Every hour of not treating a spine injury decreases your chances of getting movement back,” Josh said.“It couldn’t wait.”The cantor was chanting Kol Nidre when Josh’s phone vibrated. The flight was a go. Could he come with the plane to stabilize the patients? He consulted the hospital director, the head of the spine unit, (Russian-born) Prof. Leonid Kaplan and Prof Iri Liebergall, head of orthopedics.They gave him the green light.He asked someone to tell his wife, in the women’s section, that he was leaving.He had to get to the hospital in Jerusalem to pick up a neck stabilizing kit.“I remembered that fortunately I’d stopped for gas before Yom Kippur,” Josh said.The highway was filled with bikers.An ambulance rushed him to the airport where he met the other team members.The plane took off at 9:58 p.m.They landed close to midnight. The Israeli consulate arranged an ambulance to take them to the injured.Josh stabilized Noa’s neck, and performed a stabilizing operation on Yiftah.Both were in critical condition. Hanoch and Ivri had light injuries. After five hours on the ground they took off.“I was worried that it would be hard to gather the staff on Yom Kippur. What a beautiful sight to find everyone there,” Josh said. Many, like Prof. Liebergall, had walked. Others came by bike. Ambulances had worked overtime bringing others.They operated all day. When they finished, the last prayer of Yom Kippur, Avinu Malkenu, was being sung at the hospital’s synagogues.The next day Josh found himself humming a line of “Eretz Zvi,” the poignant Israeli song related to Operation Entebbe: “A nation who will not fall silent, who will not abandon its children afar.”
The author is a Jerusalem writer who focuses on the stories of modern Israel. She serves as the Israel director of public relations for Hadassah, the Women’s Zionist Organization of America. The views in her columns are her own.
Advertisement
Subscribe for our daily newsletter