Increased cooperation, particularly when it is supported by Turkey, a country with immense importance to Israel both economically and militarily, should be encouraged. 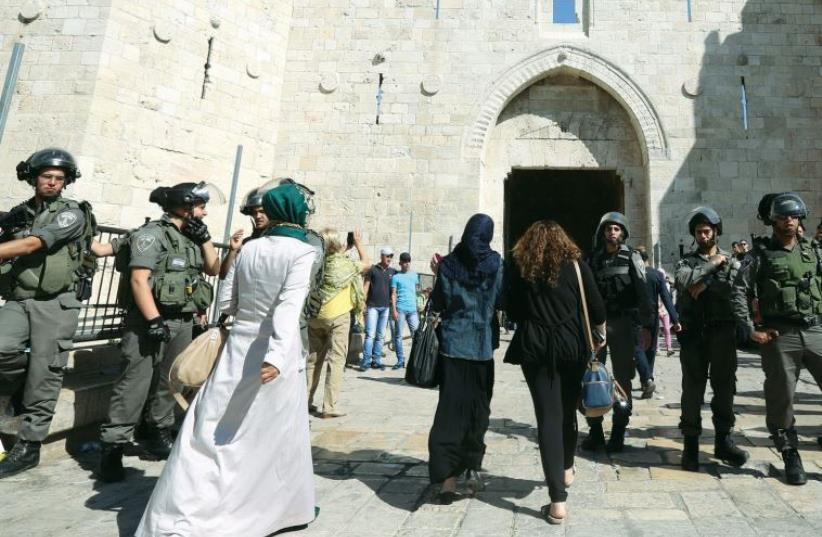 PALESTINIAN WOMEN visit Jerusalem on the eve of Ramadan
(photo credit: MARC ISRAEL SELLEM)
Advertisement
There are at least two reasons to be cautiously optimistic about a plan involving the Turkish government to build an industrial zone in Jenin. First, it signals that relations between Israel and Turkey, which have deteriorated greatly since the 2010 Mavi Marmara imbroglio, might be warming. Second, the creation of an industrial zone in Jenin that hosts economic cooperation between Israelis and Palestinians might lead to an alternative track of reconciliation and normalization that decades of diplomacy and peace talks have failed to achieve.Deputy Regional Cooperation Minister Ayoub Kara met in Tel Aviv on Monday with a Turkish delegation to discuss the project. His office billed the Turkish visit the first of its kind since the Mavi Marmara.“This is a groundbreaking project that will strengthen the Palestinian economy and rebuild the relationship between Israel and its neighbors, particularly Turkey,” Kara said.The Turkish delegation’s visit comes after Foreign Ministry director-general Dore Gold, who met in Rome in June with Turkey’s interim foreign minister, Feridun Sinirlioglu, said that regional developments and challenges are compelling Ankara to make changes in its regional policies, including regarding the Jewish state.Sinirlioglu was ambassador to Israel from 2002 to 2007.Will we be seeing a real warming of relations between Israel and Turkey? It is unlikely. But the building of an industrial park in Jenin that draws Turkish money and businesses is a step in the right direction.The Jenin industrial zone’s potential for encouraging cooperation between Israel and the Palestinians is very welcome as well. After all, the futures of the two peoples and their economies are inextricably intertwined. Two-thirds of Palestinian imports are from Israel and about 80 percent of Palestinian exports are to Israel.Increased cooperation, particularly when it is supported by Turkey, a country with immense importance to Israel both economically and militarily, should be encouraged.Improving the economic situation of Palestinians could lead to improved relations between the peoples.Prime Minister Benjamin Netanyahu has said in the past that peace talks are doomed to fail unless they are based on shared interests, particularly economic interests.The Jenin project is part of a broader program sometimes referred to as the Valley of Peace Initiative that aims to promote economic cooperation among Israel, Jordan and the Palestinians.A centerpiece of the initiative is to plan and build a number of qualifying industrial zones, or QIZs, in Jericho, Bethlehem, Gaza, Hebron and Tulkarm as well as in Jenin, which is being paid for with German as well as Turkish and Israeli funds.QIZs are industrial parks through which participating countries can export goods to the United States under the US-Israeli free trade agreement, without tariff or quota restrictions, subject to certain conditions. There are 28 such zones at present: 15 in Egypt and 13 in Jordan.Together they account for $1 billion in exports a year.The Palestinians have set up the Palestinian Industrial Estates and Free Zones Authority, or PIEFZA, to coordinate the work. Nadim Abu Shamlah, PIEFZA’s project operation director at the Jenin QIZ, said that Israel has given its full support and has agreed to provide businesses – Israeli, Turkish and Palestinian – located in Jenin with access to the Haifa Port and that companies would be exempt from Israeli taxes and customs. He also said that Palestinian Authority President Mahmoud Abbas was pushing the initiative.Yet, while there is room for some cautious optimism, we must keep in mind that this is not the first attempt to use economics to foster cooperation and, ultimately, peace between Israel and the Palestinians.As we know, Palestinian extremists have strongly objected to any attempts at normalization of relations.The Erez Industrial Zone on the border with the Gaza Strip became the target of deadly terrorist attacks that eventually forced its closure. Ideology trumped pragmatism in the past and there is little reason to believe that anything significant has changed within Palestinian society. But there is, nevertheless, room for some cautious optimism.