The Jewish community is at its strongest when we work together

The only time the Jewish world condenses more than when it’s under attack is when we are the ones perpetrating the attacks. 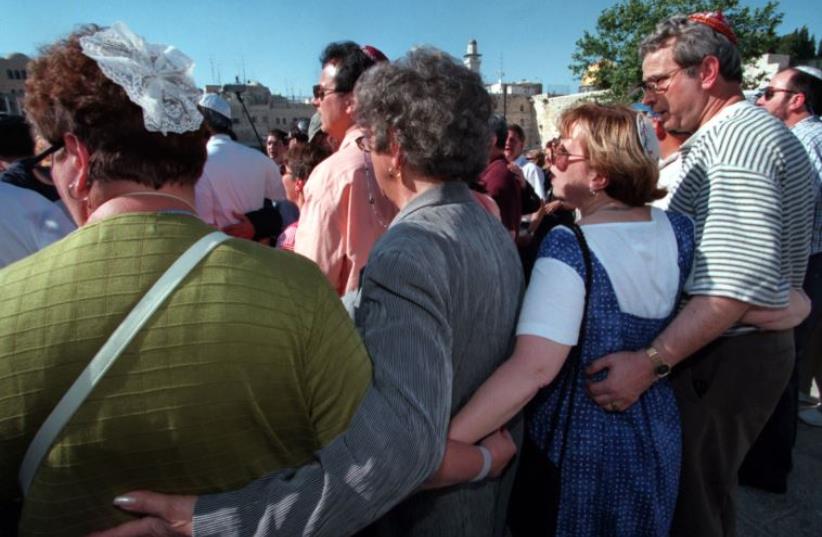 American Jews who are members of the Union for Reform Judaism, formerly the Union Of American Hebrew Congregations at the Western Wall in Jerusalem‏.
(photo credit: REUTERS)
Advertisement
The only time the Jewish world condenses more than when it’s under attack is when we are the ones perpetrating the attacks.Recent events were a low point for all of us; they were not just acts of horrific violence but attacks on the values that run to the core of our faith. Jews around the world have felt the impact and the repercussions are serious.The attack carried out at the recent gay pride march in Jerusalem, together with the terrible incident which saw 18-month-old Ali Dawabsha and his father, Sa’ad, burned alive, and a similar arson attack on the Church of Loaves and Fishes in the Galilee were despicable acts which were both horrific and truly saddening to thousands of Jews around the world.When evil raises its ugly head, the challenge is how we as a people respond. Two weeks on I am proud of the way our communities reacted.The full-page adverts showed how seriously our spiritual leaders are prepared to tackle religious extremism and I am happy to add my voice and the voice of the Conference of European Rabbis to that call.Whether we like it or not, public calls for action are not enough on their own. Each and every one of us is accountable to the rest of our community. Whether we like it or not, our faith connects us. The behavior of one person or one group has repercussions for us all.We must understand the repercussions these acts of terrorism have on the Jewish communities of the Diaspora. Whether it is a comment from a colleague or abuse on the street, we all suffer because of the behavior of a few.But what makes these acts of terrorism worse is that European politicians want to help us. They want to fund protection for our schools and synagogues in the UK and France. They want to work with us on religious rights at the Council of Europe and in the European Parliament.They show up to our events and they actively support our communities.When an extremist in Israel stabs someone on a march, the community in Denmark finds it harder to fight the ban on shechita. When someone attacks a house and a child is burned to death, Jewish schools in Europe find it harder to get state funding.Is it a direct correlation? Of course not. But does it come up when we are having private discussions with decision makers? Yes. Does it influence their decision making? Of course.It is clear to me that the biggest threat to Judaism in Europe is political attacks on our religious rights.It is a battle we can only win with political support. We must keep our existing allies and make more if we are to be successful in our fight to continue to practice our faith in an open and free environment.While we have valuable relationships in Brussels and Strasbourg, we cannot take it for granted that we will continue to get political protection.If Jewish extremists, however much we denounce them, continue to behave as they have been, there will be an irreversible negative impact on Jewish communities.Europe is a diverse continent made up of people from all different cultures and persuasions. But it is also a continent that, for the past 70 years, has seen Jewish communities establish and grow. While it is true that the threat of extremism looms over us and is only heightened as Islamic State grows, we must also understand what we have and work as a community to maintain it.We cannot change the past, but we can influence the future. We need to make extremists understand the impact they are having on us all.There is no easy answer. We need ideas from all members of society no matter their social standing. What can we do to take a stand, and I am not talking about a publicity stunt! We need real deterrents that are going to have a real impact.What I am sure about is that we can be successful in our goal. The Jewish community is at its strongest when we are united and work together for a single aim. The events of the past few weeks have given us an opportunity to grow and come together to fight those who seek to undermine us. Together we can reestablish our values and protect our future.The author is president of the Conference of European Rabbis.