The lonely people of faith: A defining moment for American Jewry

Do American Jews have the courage to wear their Jewish identity with pride during these difficult and challenging times? 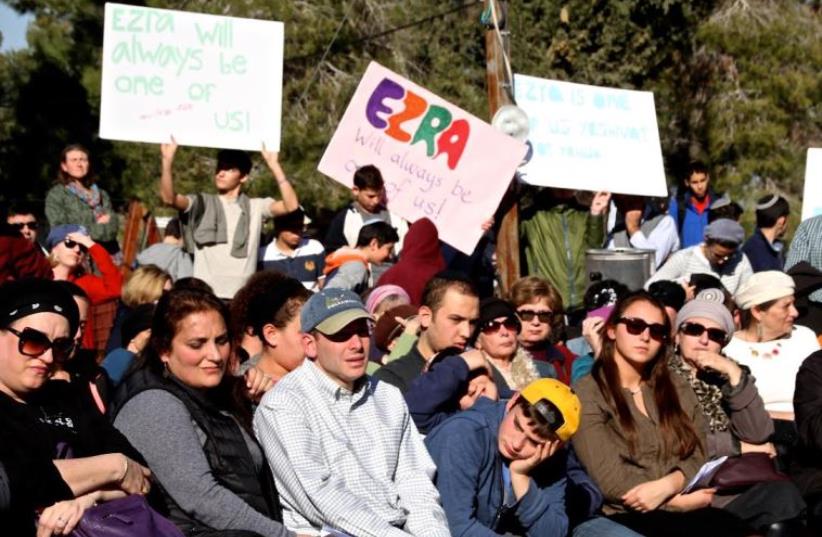 The family of slain American teen Ezra Schwartz at a special ceremony at a nature conservation. From left to right his aunt, Rachel Deri, mother Ruth, father Ari, brother Hillel and sister Mollie.
(photo credit: TOVAH LAZAROFF)
Advertisement
Ever since the shooting death of Ezra Schwartz just over a month ago, American Jews have had good reason to feel increasingly skittish about sending their young people on trips to Israel. The daily headlines of knife stabbings, car rammings and use of firearms by “lone wolf” Islamic terrorists have provided ample cause to erode the confidence of American Jewish organizations and their leaders that sponsor trips to the Jewish state. Unlike the people of Israel who live here as citizens and whose young people serve in the IDF, American Jewish leaders know they have a choice; they do not have to send their young people here under their auspices for a 10-day Birthright trip, a month-long summer program or a year-long MASA study period. They can keep them out of the region as the latest US State Department directive has urged them to do. After all, many of them must be thinking in their hearts, why send our young people into harm’s way? There the only reason to do so is because there is something larger, more important at stake during this period than just another canceled trip: the very character of American Jewry and its youth. Yes, character. What do American Jews stand for? What should their young people believe in and how should they express those beliefs – not just intellectually, but with their very bodies? Fifty years ago, my teacher, Rabbi Joseph B.Soloveitchik, who established the Maimonides school in which Ezra studied as a young person in Boston, wrote a famous essay in English entitled “The Lonely Man of Faith.”Were he alive today, I believe he would write another essay, entitled: “the Lonely People of Faith.” In the latter essay, “faith” would refer not only to our people’s belief in God, although certainly that too, but also to our people’s faith in ourselves and in the justice of our return as a Jewish nation to our ancestral homeland. He would argue, as he did in a previous essay, “The Voice of my Beloved Knocks,” that living as a proud and free Jewish people in the land of Israel at this moment in history cuts to the essence of who we are and God’s call to us to return as a nation in history.Rabbi Soloveitchik would write this because he mastered the entire corpus of Jewish tradition and knew that the thrust of the biblical canon and the great hope of rabbinic Judaism was the return of the Jewish people and the creation of a sovereign holy nation in the land of Israel. He would write this because knowing Jewish history he would understand the significance of this moment just two generations after the eradication of European Jewry during the Holocaust. He would call on American Jews to stand in solidarity with their brothers and sisters in Israel because, unlike most of American Jewry during the Holocaust, “One may not stand idly by the blood of our brothers” (Lev. 19:16). He would see the trips of these young people to Israel, for whatever length of time, as an expression of that solidarity and as a litmus test of our people’s essential character.Are American Jews prepared to continue to come forward and stand in solidarity with their Israeli brethren, to be “The Lonely People of Faith?” Even without having to fight in the Israeli armed forces, are American Jews prepared to have their young people join the Israeli people in an expression of solidarity to study here about their homeland, their heritage and their history? To strengthen their Jewish identities so that they can better stand up for what they believe in and are a part of when they return to the States? Courage in the face of adversity is how one builds character and the ability to take risks.Do American Jews have the courage to wear their Jewish identity with pride during these difficult and challenging times? So far, American Jews – organizational leaders, parents and young people – are demonstrating remarkable courage and resilience.Birthright groups, educational missions and participants in year-long study, internship and volunteer programs continue to arrive and be present here despite the daily news reports. Aware of the risks, they are taking all security precautions and prudent steps to keep safe. But they are coming, and in large numbers. Cancellations are few and far between. Their courage to continue to do so may just prove to be a defining moment for American Jewry in which they proudly earn the title: The Lonely People of Faith.

The author has been director of Israel programs for the Tikvah Fund for the past seven years and is president emeritus of the Wexner Heritage Foundation.He is the author of Leading the Passover Journey and The Genesis of Leadership (Jewish Lights, 2005, 2006). The opinions expressed in this piece are solely those of the author.
Advertisement
Subscribe for our daily newsletter