The need for an ‘Educational’ Birthright program 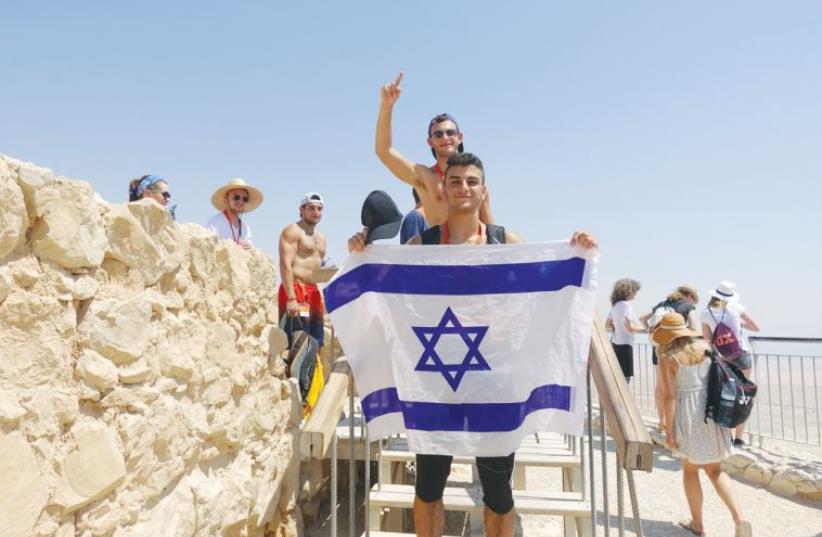 Birthright participants pose on top of Masada.
(photo credit: TAGLIT-BIRTHRIGHT)
Advertisement
Numerous studies have documented that US college campuses are increasingly hostile not just to Israel but to their Jewish students. Most American Jewish high school graduates are unprepared for the onslaught of anti-Semitic and anti-Israel propaganda they will encounter. Unfortunately, some of these young Jews fall prey to these hateful disinformation campaigns and, as a result, become alienated from the Jewish people.Many of those who resist the propaganda nonetheless experience significant emotional distress because of prevalent anti-Semitic and anti-Israel social pressure. For fear of how they might be labeled, these students refrain from challenging the anti-Semitic canards expressed in their classes and elsewhere, both by classmates and, far too often, by their teachers. Their reticence to speak is exacerbated by the fact that, alas, these students are often astonishingly ignorant about Israel and the Middle East.Such silence helps to perpetuate the hostile, anti-Semitic environments at numerous schools. A number of these Jewish students painfully acknowledge that they end up removing their Magen David charms and mezuzahs and even concealing the fact that they are Jews.The regular Birthright program is terrific; it provides a wonderful, eye-opening experience. But a richer, more intellectually meaningful component is at least equally important.This article is a call for the creation of a broad-scale “Educational” Birthright Program. Specifically, I propose: 1. A free, college-accredited course for high school students in the summer before they start college. The course might be listed, or cross-listed, as a history, political science or writing and rhetoric offering. The precise content of the course could be tailored to different target audiences of Jewish students, just as, at many colleges, college professors use different syllabi for the same course title. To maximize the number of students who it, it could be offered both on a face-to-face basis and as distance learning.2. Among other things, the course could educate students about the historical background of anti-Semitism, including Arab anti-Semitism, prior to the creation of the State of Israel, the historical events surrounding the War of Independence, and Israel’s ensuing efforts to reach peace with its neighbors. The course could explore how those neighbors treated Arab refugees – and could contrast the ways in which Israel and those neighbors treat women and various minorities (e.g., those based on religion and sexual orientation). The course could also focus on the countless ways in which Israel has provided humanitarian aid not only to miscellaneous nations throughout the world, but even to Middle Eastern Arabs who dwell in areas (e.g., Syria and even Gaza) that are openly hostile to Israel.3. Moreover, the course could educate students regarding the resources available – online and elsewhere – regarding the Arab-Israel conflict.Thus, students would be introduced to the websites of many pro-Israel advocacy groups, such as the AMCHA Initiative, the Schusterman Center for Israel Studies at Brandeis University, the David Project, Stand With Us, and others.4. Guest lecturers could include articulate non-Jews from the Middle East (e.g., Christians and Muslims).5. The course could require students to engage in written and/or oral exercises in which they would need to articulate arguments demonstrating that they have mastered course material.6. The course could also educate students about the legal rights they have as students to be protected – by their colleges – from a hostile, anti-Semitic environment on campus.7. Finally, the course could introduce students to the major Jewish organizations that are active on campus.Such an introduction might begin a bonding process that could facilitate the students’ participation in the organizations once they arrive on campus in the fall.Of course, the exact contours of each cohort of the course could differ.Some sections might devote relatively more time to Israel’s artistic, economic, medical or scientific accomplishments, and its contributions to the world’s culture and prosperity.Other sections could empha- s i z e the spiritual connection between Jews and Israel. The point is that the course could both instill pride in Jewish students and prepare them to respond to the propaganda to which they will be exposed.I believe that there is still time for such a program to be tried on an experimental basis in summer 2016.Offering the course with college credit for free is part of the “carrot” designed to attract students to the course and to convince parents to encourage their children to enroll.What is necessary, of course, is seed money to engage people to develop the course and to help market it.Moreover, money would be needed to pay the educational institution that would confer the credit (at a negotiated, one hopes substantially reduced rate) and to engage charismatic, qualified (and possibly adjunct) instructors.The author is a professor at the DePaul University College of Law and director of its Center for Jewish Law & Judaic Studies.