The owl: The threat to America

Donald Trump is not a fascist. The real problem with his way of governance is its escalating arbitrariness, which undermines the predictability behind the American legal order. 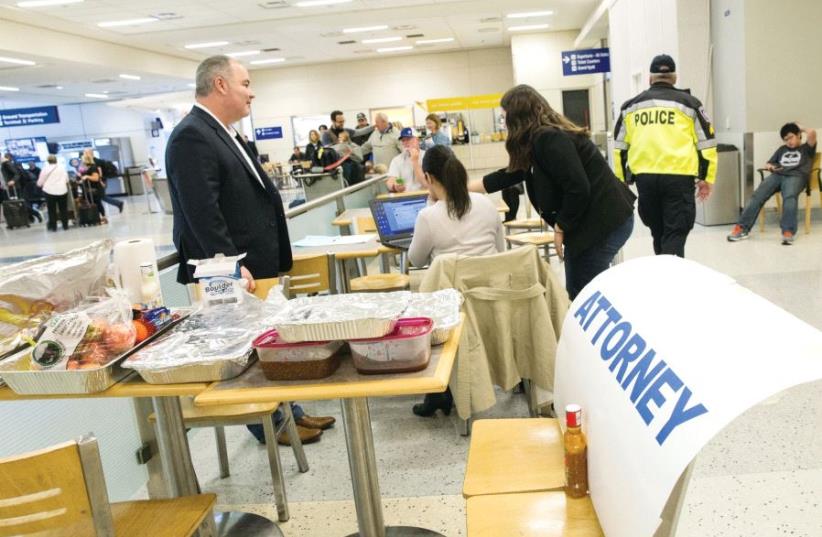 Attorneys volunteer their services at Dallas/Fort Worth International Airport, Texas, earlier this month
(photo credit: REUTERS)
Advertisement
US President Donald Trump’s decision to ban the citizens of seven Muslim countries from entering the United States gave rise to chaos in the nation’s airports and beyond. The decision of two federal courts, in Seattle and San Francisco, to overrule the executive order added fuel to the fire of an escalating fight between the president and the Judiciary.Many critics, as well as the judges of the 9th Circuit Court in San Francisco, have maintained that the ban is irrelevant to national security. As we all know, citizens of the aforementioned countries are responsible for almost zero terrorist attacks in the United States, while countries that actually exported terrorists were left untouched. It is also needless to elaborate on the immense contribution of immigrants from some of these countries (particularly Iran) to the American economy, culture and higher education. But Trump’s ban, painful and disastrous as it is, is merely an indicator of a larger problem.To find out what the real threat is, it is first necessary to emphasize what it is not. Trump and his senior adviser, Steve Bannon, are not “fascists,” as instinctively claimed by some progressives who are still fighting the wars of the 1930s. Nor there is there real evidence that they are antisemites. Their virulent hatred is directed against other groups – mainly liberals, the educated elites, undocumented immigrants and above all, Muslims. The really bad news is that Trump’s peculiar way of governance compounds this problem and may lead to a dangerous unraveling of US institutions, to the degradation of rule of law, and possibly to outbreaks of political violence.We could get a glimpse of the real issue from the words of one stranded Iraqi traveler who drew on the experience of his own country. The executive order, he said, was not only unfair but arbitrary – a decree made without consultation and due process, in a way reminiscent of the decrees published by Saddam Hussein.Indeed, the arbitrariness of Trump’s executive order beats the very concept of legal immigration. Legality, in immigration as well as in other fields, depends on predictability. Legal longterm immigrants, let alone green-card holders, have made a contract with the state. In return for tedious paperwork, adaptability to stringent criteria and other conditions, they are permitted to remain in the United States for a prescribed period (and in the case of greencard holders, indefinitely).Naturally, a visa may be revoked if the immigrant violated the conditions specified in advance. “In advance” are the key words here. People can plan their life according to the visa, because its terms and conditions are predictable.When lives and plans of visa holders can be shattered on the whim of a capricious, highly unpredictable president, there is no real difference between legal and illegal immigrants. Both could be evicted at a moment’s notice. This arbitrary rule makes the law redundant.That might be true in other fields as well. Trump’s predilection to rule by whim might corrode the predictability that permits people to live inside the confines of the law. If behaviors deemed legal today might become illegal tomorrow, the border between criminals and law-abiding citizens might become increasingly porous. If universities, for example, are defunded because they annoyed the president and his cronies, who can guarantee that citizens who insult Trump will not be fined, fired and even arrested according to future executive orders? Trump’s tendency to issue orders without staff work, consultation and due process might seem to his supporters as an exciting charge through the obstructions of DC bureaucracy. In fact, this is a dangerous bypass of checks and balances, akin to driving in full speed with all safety systems shut down.In the Trump age, the normal system of checks and balances in the US is operating with limited effectiveness. Both houses of Congress are dominated by the Republican Party, and so far, even GOP politicians who detest Trump mostly followed along. There are exceptions, to be sure: brave Republican leaders such as Lindsey Graham and John McCain did resist Trump openly, but this resistance is still isolated and limited to lingering representatives of the GOP old guard.The story of the Muslim ban showed that the bureaucracy, like most bureaucracies, was quick to jump on the bandwagon, and the few who dared to dissent were quickly fired by the new administration.Mass protests and demonstrations are essential, but they cannot be relied on indefinitely. Currently, the courts may be the only effective check on Trump’s authority.Someone has to set him limits, otherwise his arbitrary behavior may demolish the predictability which underlies the current American order.

■ The writer is a military historian and a senior lecturer for general history and Asian Studies in the Hebrew University of Jerusalem. His latest book, The Plots against Hitler, was recently published by Houghton Mifflin Harcourt.
Advertisement
Subscribe for our daily newsletter