The Peres legacy: What can we learn from it?

Through his tragic mistake called Oslo, Peres bequeathed to us a legacy to learn from. May we learn the lessons well. 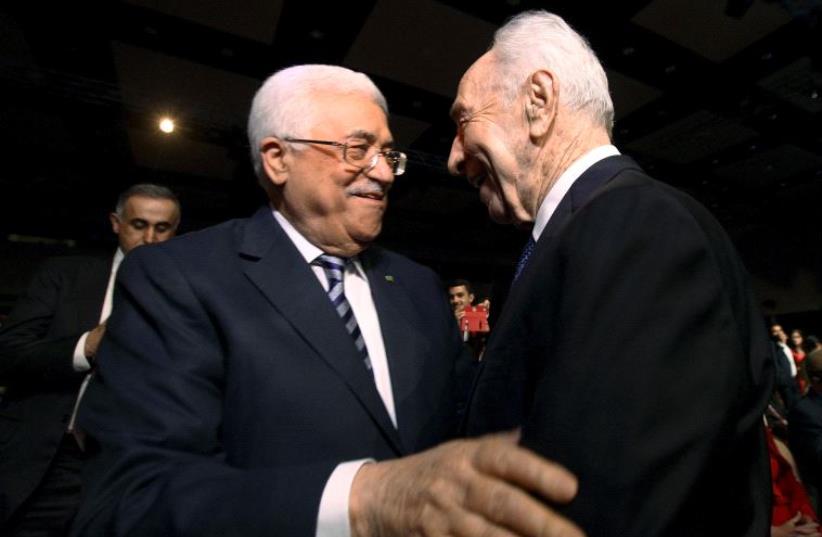 Former Israeli president Shimon Peres (R) shakes hands with Palestinian Authority President Mahmoud Abbas (C) at the World Economic Forum on the Middle East and North Africa at the King Hussein Convention Centre at the Dead Sea May 22, 2015
(photo credit: REUTERS)
Advertisement
Former president Shimon Peres was, in many ways, an inspirational figure. He provided a stellar example of how to remain fully active into one’s old age, and do so passionately. He held strong beliefs and stood behind them, even when the facts on the ground contradicted those beliefs. Peres was a pivotal figure in the establishment of Israel’s nuclear program and often played an important diplomatic role in wartime, speaking out in defense of Israel.Already, the political pundits are discussing his legacy and world leaders are effusively singing his praises, with much of the commentary focusing on his decadeslong role as the primary advocate of what has become known far and wide as “the peace process.”Yes, Peres was one of the early fighters for the State of Israel, and has a record of accomplishment to show for it. However, he will forever be known around the world as the architect of the Oslo Accords, the peace agreements secretly negotiated and initialed by Israel and the Palestine Liberation Organization (PLO) in 1993, which led to substantial Israeli withdrawals from strategic and historically significant portions of the Land of Israel.What followed these withdrawals, which began in the 1990s, were the worst waves of terrorism in Israel’s history. Many hundreds of innocent Israeli civilian lives were lost and thousands were wounded.Many attacks were carried out in the streets, restaurants and roads of Israel by fiercely Islamic terrorist organizations such as Hamas and Islamic Jihad, but the largest number of attacks were masterminded and spearheaded by the Fatah terrorist organization, led by PLO leader Yasser Arafat and his successor Mahmoud Abbas.The moral problem for Peres was that Arafat and Abbas, who led the Palestinian Authority (PA) that had been established by his Oslo Accords, were same individuals whom Peres was continuing to call Israel’s “partners in peace.” This fanatical clinging to an obviously failing process, as exemplified by his praise of the main inciters of vicious terrorist attacks, was never abandoned by Peres, despite the fact that Arafat, and subsequently Abbas, were paying substantial sums of money to terrorists for the specific purpose of encouraging murderous attacks on Jews.The PA’s policy of supporting and encouraging Islamic terrorism has continued to this day.The reckless devotion of Peres to his beloved Oslo peace process, which caused so much death and so much suffering, as well as his failure to apologize to the many thousands of terrorism victims, will never be forgotten. Conversely, and perhaps ironically, he will receive little praise in most of the Islamic world, which has always desired, and still desires, nothing less than the total destruction of Israel.We always say positive words about those who have left us, and Israel’s leadership, along with the media, will certainly be discussing his accomplishments and what many will call his “great legacy of peace,” but an honest appraisal of history demands that we learn from his tragic mistakes as the architect of Oslo. Israel and the free world are under the threat of Islamic terrorism and Islam’s core jihadist philosophy like never before. To pander to such an evil ideology and call it peace is a terrible crime that should never be repeated.We Jews believe that everything that happens, happens for good.That doesn’t mean that everything that happens is good, but that even when bad things happen, some good is supposed to emerge from it.Through his tragic mistake called Oslo, Peres bequeathed to us a legacy to learn from. May we learn the lessons well.The author, a former mayor of Shiloh, is founder and president of Shiloh Israel Children’s Fund, which heals the trauma of child victims of terrorism. He is author of five books, including Peace for Peace: Israel in the New Middle East and his latest, More Sparks From Zion.