The risky business of Swedish policy in the Middle East

The Iranians, who have already learned about Swedish aid to Kurdish forces operating under US and Saudi auspices in Iraq, sent a message to the Swedes during Lofven’s visit. 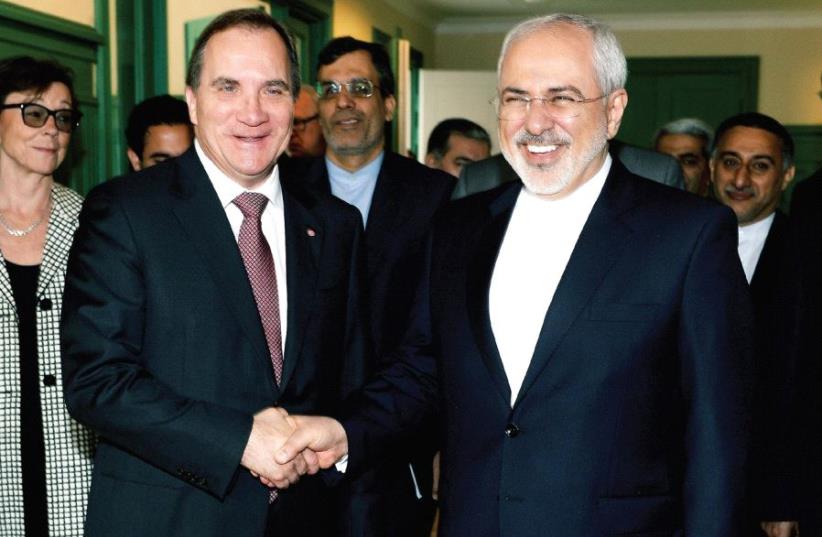 SWEDEN’S PRIME MINISTER Stefan Lofven welcomes Iran’s Foreign Minister Mohammad Javad Zarif at Rosenbad in Stockholm, Sweden last year.
(photo credit: REUTERS)
Advertisement
The Swedish prime minister’s recent visit to Iran appeared to be another achievement for Sweden’s neutral position, which succeeded in bridging the gap between maintaining friendly ties with the Sunni states and the Shi’ite axis. But the visit opened a new phase in the complex politics of Sweden. Sweden, which last year restored its relations with Saudi Arabia, one of the largest Scandinavian clients in the Middle East, is once again facing a crossroads that could lay its relations with some of its traditional partners on the line.Sweden’s traditional involvement in the Middle East ranges from cooperation with the West to maintaining relations with Arab states (which also contributed to its success in promoting mediation by Olof Palma in the Iran-Iraq War). At the end of 2001, Sweden participated as a fighting force in Afghanistan within the framework of the International Security Assistance Force (ISA F).Cooperation between Swedish security services and American intelligence agencies continued, including the handing over of Swedish citizens suspected of terrorism for interrogation in secret US installations. The New York Times also revealed Sweden’s involvement in drone attacks in Afghanistan.Sweden managed to maintain a balanced approach without arousing the wrath of the countries of the region – until recently. Relations with Saudi Arabia were almost frozen two years ago following a statement by the Swedish foreign minister against Saudi Arabia. This prompted the Saudi kingdom to recall its ambassador to Stockholm in March 2015, on the grounds that the foreign minister’s statement was “blatant interference in [the kingdom’s] internal affairs.” As a result, it was decided to cancel the comprehensive military cooperation agreement between the two countries.To prevent economic losses and avoid losing traditional ties with the Saudis, the Swedish king sent a clarification letter in which he tried to resolve the crisis. The series of correspondences between the two monarchs eventually led to a reconciliation and the visit of Swedish Prime Minister Stefan Lofven to Saudi Arabia, accompanied by bankers from the Swedish corporation The Wallenberg Group. The Wallenberg Group owns the Saab Group, which manufactures a variety of weapons sold to Saudi Arabia. At the end of their meeting, Saudi King Salman bin Abdulaziz stressed that the discussions between the two leaders focused on means to promote relations between the two countries, as well as the situation in Yemen and Syria and the challenges facing the region. The two also discussed transferring weapons to Kurdish forces in northern Iraq.Lofven continued his official visit in northern Iraq, where he met with Kurdish Prime Minister Nechivar Barzani and toured the area to visit a Swedish military training camp.But the Swedish policy in the Middle East that has succeeded thus far has raised question marks about the ability of the Swedes to maintain good relations with both Sunnis and Shi’ites following their reconciliation with the Saudis. Sweden recently chose to promote the Shi’ite axis, mainly through trade agreements with Iran. Lofven was the first Swedish prime minister to make an official visit to Iran, and declared that the war in Syria would be one of the most important issues in the meeting between the two countries. The press office in Sweden stated that historically Iran was once one of Sweden’s most important export markets in the Middle East. The visit resulted in a meeting between representatives of 70 Swedish companies and Iran’s 60-member economic delegation in Stockholm to discuss common interests between the two countries.Referring to his meeting with Iranian President Hassan Rouhani, the Swedish prime minister said they discussed the Syrian crisis and relations between Iran and other regional players such as Saudi Arabia, although Iranian representatives told the Swedes that the way to end hostility in Yemen and Syria is through a unity government with opposition groups that Tehran continues to finance.Tehran also emphasized that one of the reasons for the lack of confidence in this region is that foreign countries believe that the solution to its problems is military invasion.The Swedes realized that the repercussions of Swedish aid to the Kurds in Iraq had a direct impact on the attitude of Iranians toward Swedes.Since the struggle between the Kurdish minority and Iran has resumed, tension has increased between the Iranian Kurdish parties and the Iranian regime, while Iran continues to accuse Saudi Arabia of funding and arming the Kurdish parties in Iran. Although the Saudis continue to deny their involvement, the Kurdish Peshmerga forces in Iran are fighting against the Iranian Revolutionary Guards and are continuing to raise funds. A senior Kurdish official explained that Sweden is an important supplier of weapons to the region, adding that it is not only a political, but also an economic interest.But In contrast to Swedish aid to Kurds in Iraq, the official revealed another dualism of the Swedish government, which refuses to support Syrian Kurdish forces in their struggle against Islamic State after recently deciding to develop a joint stealth aircraft with the Turks.The Iranians, who have already learned about Swedish aid to Kurdish forces operating under US and Saudi auspices in Iraq, sent a message to the Swedes during Lofven’s visit. At the same time Sweden’s close embrace of the Iranians puts relations between Sweden and Saudi Arabia to another test. The Swedes, who have acted cautiously so far, may find that hesitant actions will lead the Saudis to reduce the scope of their dealings with Sweden and harm relations with the moderate Sunni axis and even with the Kurds.

The author is a PhD candidate at Bar- Ilan University.