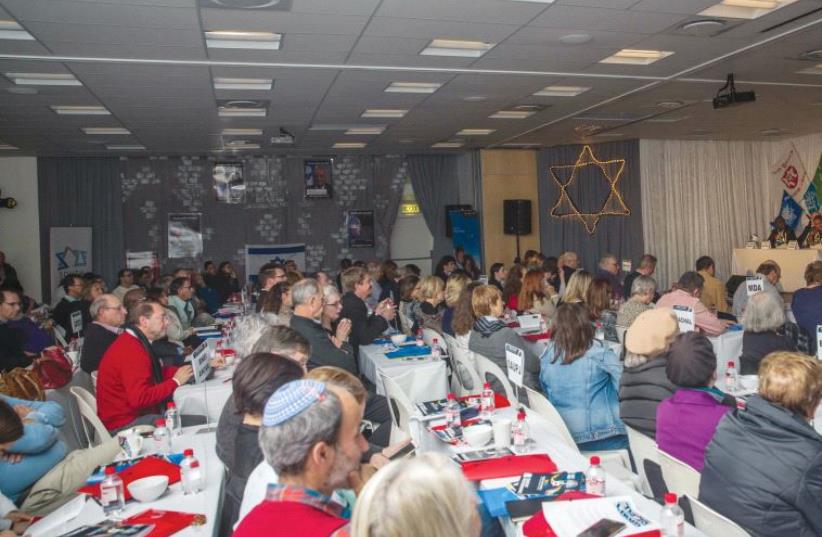 Israeli and international Jewish experts and influencers take part in a panel discussion on Israeli innovation at the South African Zionist Federation Cape Council conference
(photo credit: MARC BERMAN PHOTOGRAPHY)
Advertisement
On October 22, one thousand North American leaders will convene in Tel Aviv with one thousand Israeli leaders for “the GA.” The General Assembly of the Jewish Federations of North America is the veritable College of Cardinals of North American Jewry, a schmooze-fest connecting many of the top leaders from the 50 states and Canada.The decision to meet in Israel is not unprecedented; the decision to meet in Tel Aviv is.I attended a moving GA in Jerusalem in 2003 when thousands of quite nervous American and Canadian Jews nevertheless sang and danced along Jerusalem’s empty streets to defy Palestinian terrorism – and were greeted with cheers and tears by thousands of embattled, all too often abandoned, Israelis. Fifteen years later, convening in Tel Aviv reflects world Jewry’s growing realization that Israel is more than just the ancient Jewish Disneyland-in-stones too many tourists see. It’s a dynamic, multidimensional, Altneuland – Old New Land, as Theodor Herzl, Zionism’s founder, envisioned.The conference theme is “Israel & the Diaspora: We Need to Talk.” Boy, the organizers could not have picked a more timely focus. The Diaspora Affairs Ministry launches the Mosaic United initiative, and Diaspora liberals mutter about a right-wing Zionist plot. Birthright brings 50,000 Jews to Israel this year, but 13 spoiled-brat ideologues stage pre-planned walkouts and Diaspora liberals say, “You see, Birthright’s biased.” And, on the flip side, I regret to say, last Friday my columnist colleague Caroline Glick unfairly misread the GA’s people-hood-oriented outstretched hand as some hyper-partisan slap in the face. When even goodwill gestures are perceived as hostile acts, you know you’re in trouble.I respect Glick and included a characteristically thought-provoking passage of hers as a modern Zionist thinker in my anthology The Zionist Ideas. Moreover, her column raises important issues about some flash points that invite serious consideration. But when she misreports or distorts, it merits correction. Her column claimed that “the Federations choose to insult Israelis by holding their conference in Tel Aviv rather than Jerusalem five months after the US government finally moved the US Embassy to Israel’s capital.” Anyone who knows anything about the lead time that the super-organized Federation gives to GA marketing – and that the mass booking of hundreds of hotel rooms requires – would know that the GA chose Tel Aviv months before the embassy move, to honor the first Hebrew city, not to denigrate the Jewish people’s eternal capital, which the GAers will also visit.Similarly, Glick claims that the “spectrum of [Israeli] views” on the program “spans from center-left to far-left” and that Prime Minister Benjamin Netanyahu’s is “the only representative [Israeli] voice on the program.” Yet Israel’s popular president, a lifelong Revisionist Zionist, Reuven Rivlin, will be addressing the conference – along with many others who transcend her overly shrunken spectrum. Glick zeroes in on Donald Trump as the major wedge separating most American Jews and most Israelis. Indeed, Trump will be the elephant in the room (Republican pun intended). But to claim “The Federations’ use of their conference to disrespect Israelis while highlighting long-standing disagreements is a means to express their anger as Democrats at Israelis for supporting Trump” is unfair and ahistorical. “Unfair,” because hundreds of Jewish leaders are not flying thousands of miles to insult Israel but to engage Israelis – Blame Israel Firsters don’t need to fly to Israel to demonize Israel. And “ahistorical,” because many of the tensions the conference will address predated Trump and will outlast him.Full disclosure: I’m one of those supposedly non-representative, crazy pinko Israelis the Federation invited to speak – at the plenary on Israel-Diaspora relations. I also attended two informal focus-group type brainstorming sessions, where GA organizers solicited opinions from half a dozen Israelis. All of us, from Left to Right, olim and Sabras, were committed to building bridges among Jews rather than Bibi-bashing or American-Jew-trashing.I’ve been offered no money for my talk, nor even a hotel room for my troubles, condemning me to sacrificing my morning jog and braving Jerusalem-to-Tel Aviv rush hour traffic to attend my session on time. The organizers gave me no script or guidelines beyond the format. They asked me what I wish to say. I told them I have three messages.First, let’s end all this apocalyptic talk and share some good news. American Jews and Israelis have never been so familiar with one another and so enmeshed with one another. Modern Jews live in a global village, like everyone else. That encourages intercontinental intimacy. Thanks to Birthright and other initiatives, the percentage of American Jews who have visited Israel has more than doubled from about 20% 20 years ago to more than 50% today. Some of today’s tensions reflect how much better we know one another, and how much more we need one another, spiritually, psychologically, existentially – not necessarily financially.Beyond this surprisingly good news, I will address the sobering news and blast American Jewish leaders and Israeli pols. Those who foment tensions and emphasize conflict to prop themselves up are making a terrible mistake. These demagogues – in Hebrew or English – are blowing one of our most valuable shared strategic assets: Jewish people power. Finally, I will endorse the conference theme “let’s talk,” pushing the proposal Natan Sharansky and I made this summer for a Jewish People’s Council to air our differences. And there’s something even more important. “Let’s listen,” too. We might learn from one another, not just judge one another harshly, hastily and, all too frequently, unfairly.Recently designated one of Algemeiner’s J-100, one of the top 100 people “positively influencing Jewish life,” the writer is the author of the newly released The Zionist Ideas, an update and expansion of Arthur Hertzberg’s classic anthology, The Zionist Idea, published by the Jewish Publication Society. A distinguished scholar of North American history at McGill University, he is the author of 10 books on American history, including The Age of Clinton: America in the 1990s. www.zionistideas.com