An introduction to "old Germany, new Germany and 'mutant' Germany." 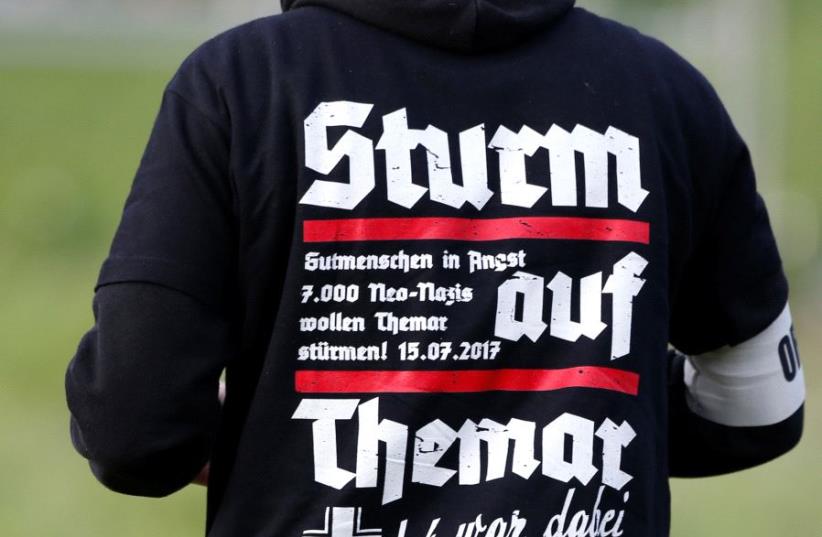 Attendee at Neo-Nazi concert, Themar, Germany, July 2017
(photo credit: REUTERS/MICHAELA REHLE)
Advertisement
Contemporary Germany manifests itself in three ways: old Germany, new Germany and “mutant” Germany. Many events in Europe have aspects of relevance for Israel, Jews and/or understanding the impact of the Holocaust. In Germany this is more often the case than in other European countries. The recent extreme violence in Hamburg by anarchists from a variety of countries before and during the G20 meeting of world leaders is a case in point. Already prior to the meeting rioters started fires, torched cars, shattered shop windows and threw firebombs. Almost 600 policemen were wounded.One wonders whether the 20,000 policemen deployed to the area, who were later supported by additional forces, could not have prevented this violence by employing more forceful actions against the rioters. In Germany where the crimes of the Holocaust are often present in the conscious and probably even more so in the subconscious, it is preferred that citizens suffer from public disturbances rather than risk killing a rioter by mistake.Strengthened by radically diverse experiences, Israel handles these matters differently. Six millions Jews were killed by Germans in the Second World War. The Israeli government prioritizes the security of its soldiers above that of those who attack them.At first sight the German attitude toward rioters is not unique. During the looting riots of autumn 2005 in France by immigrant youth from Muslim countries, the government lost control for several days. Thugs burned cars, shops and public buildings. However, the reason the French government was careful in its actions against the hooligans was different from that of the Germans. If a rioter had been killed, additional mobs of youngsters might have joined the violence and looting. In Hamburg, however, even though there was sympathy for the hooligans in various left-wing circles, the rioters had no significant back-up forces.The major recent immigration of refugees mainly from Muslim countries into Germany has “Holocaust impact” and Jewish aspects as well. By bringing in to Germany more than a million mainly Muslim refugees, German Chancellor Angela Merkel tried to show the world that there is a new Germany. The message was clear: in contrast with the old Germany that murdered the Jewish minority, the new Germany welcomed large numbers of another minority, Muslims.There is, however, a catch. Many of these new immigrants came from countries where there is widespread extreme indoctrination of Jew-hatred. The new Germany thus facilitated the massive immigration of antisemites. That is not the only price paid. During 2015-2016 New Year’s Eve celebrations, immigrants from Muslim countries sexually attacked hundreds of women in various German cities. The same also happened in a few other European cities.One should thus examine the new Germany a bit more closely. The welcome in past decades for Russian Jewish immigrants is an indicator of a new Germany. So are the many Holocaust memorials around the country. Yet bringing in huge numbers of antisemites among the immigrants throws a shadow on this new Germany. The behavior of the most extreme Muslims may cause the emigration of some German Jews.Some new versions of old Germany also remain. A small percentage of the population are neo-Nazis. These are not only classic antisemites, they also hate Israel. Beyond that there is another important group, which one might call “mutant Germany.” These people have replaced the demonization of Jews with that of Israel.Seven studies between 2004 and 2015 carried out respectively by the University of Bielefeld and the Bertelsmann Foundation investigated the percentage of Germans who agreed that Israel acts toward the Palestinians like Nazis behaved toward the Jews. In the 2004 poll, 51% agreed. By 2015, the percentage was 41%. German media has played a key role in this demonization of Israel. More than 70 years since the Holocaust there are sufficient indications that contemporary German democracy still has huge dark spots.The defining of three different Germanies is by nature a broad categorization. Yet as a tool it can be helpful to clarify – or at least ask well-defined questions about – many disparate events which occur in the country.For instance, among Muslims there are segments which are close to the old Germany. Their most visible hatemongers march every year on Al Quds day in Berlin. This demonstration is an invention of the Iranian ayatollahs’ regime and aims for the disappearance of Israel, which can only be achieved through genocide.Another example is a study by the British think tank Chatham House which shows that 51% of Germans want the country to stop accepting Muslim immigrants. One can reasonably assume that the “old Germans,” i.e. neo-Nazis, are part of those opposing immigration. However, it would be enlightening to have an opinion poll conducted which would show how many of the remainder are closer to the “new Germany” and “mutant Germany.”These are just two examples where the analytic tool of the three Germanies comes in handy. One does not risk much by predicting that there will be many other events in the coming years where using this classification will enable analysts to better understand them.The author is the emeritus chairman of the Jerusalem Center for Public Affairs. He was given the Lifetime Achievement Award by The Journal for the Study of Antisemitism, and the International Leadership Award by the Simon Wiesenthal Center.