The true face of liberalism

The aftermath of the US elections reveals the duplicitous nature of Liberalism, exposing it for the fascist ideology that it has become. 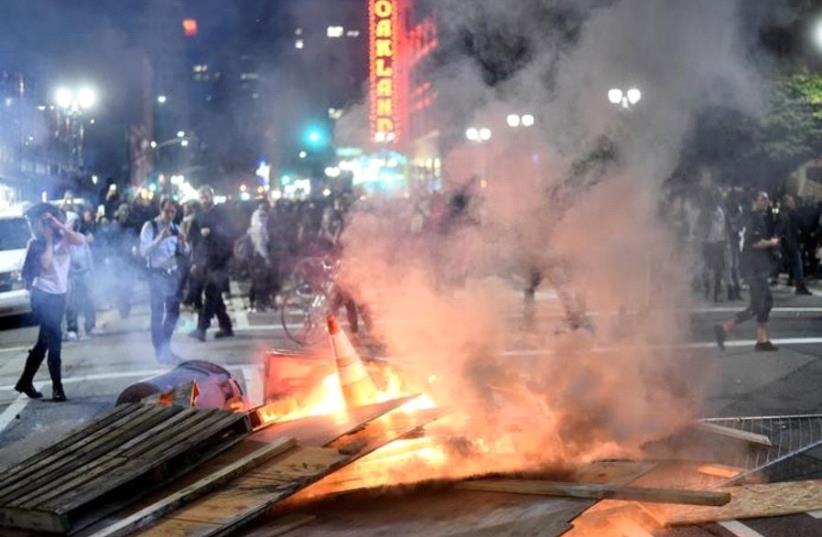 Demonstrators riot following the election of Republican Donald Trump as President of the United States, in Oakland, California, U.S., November 9, 2016
(photo credit: REUTERS)
Advertisement
Uber CEO’s bland response to the President’s three months immigration ban has put him in the crosshairs of liberal zealots, who regard themselves as “progressive.” The same thing happened to Silicon Valley’s poster child, billionaire entrepreneur Elon Musk, for not criticizing the ban more resolutely. These bullied dignitaries did not agree with Trump. Their only “sin” was that they did not chastise him with a torrent of slurs and profanities, as is commonplace these days among the “enlightened left.”Before the elections, the press was concerned with the question, “What happens if Donald Trump loses?” Los Angeles Times reporter Doyle McManus, like many other liberal journalists, did not even consider the possibility that Trump might win, and concluded that after Trump’s loss, “it’s hard to imagine that Trump will simply fade away.”But Donald Trump won, and his surprise victory exposed the true face of progressive liberalism in America. There are ample examples of the undemocratic nature of today’s American liberalism, such as their latest attempt at stymying the formation of the country’s government. Yet, perhaps the most authentic testimony I have seen came from a student of mine who wrote me about the situation in the Northeast, on condition of anonymity for fear of retribution from “liberals” and “progressives.” Below is just some of what my student wrote.

An Entire Generation Was Educated in Fantasy [student’s own title]We grew up in this liberal bubble, a fantasy land. Our English classes required we read liberal books that championed the plight of immigrant minorities while condemning the westerner as the perpetual antagonist.I like to think I have a decent moral compass. I take no pleasure in disagreeing with the trend. A person is terrified to say he is not liberal. Universities and schools raised us to breathe the notion that non-liberals are racist, backwards, white, old, men, and bigots.Right now, what I see in the liberal-left is the new fascist ideology. They are the least embracing group in this country. Somehow, we have arrived where our society is an eggshell of political correctness. Everything is racist. Jerry Seinfeld made a joke about his friend whose last name is black. He said ‘Black's life matters.’ It was funny, but Seinfeld was almost crucified for racism. This is a sickness.I am a progressive. I define progressivism as openness to all opinions, challenging everything. I also see myself as a champion of the oppressed. The oppressed right now are the Trump voters—the people who are not represented by Hollywood, the media, or tech and financial institutions where H-1B visa immigrants have all the good paying jobs.I'm very alarmed at my generation's insensitivity to those with a different opinion than theirs. Trump is obviously not always right. But the outright temper-tantrum the left and my generation are having right now is a turn-off. They are entitled and SAD!

From Entitlement to FascismIn the late 1940s, Baal HaSulam, my teacher’s father and the author of the Sulam (Ladder) commentary on The Zohar, wrote about the inherent problems of democracy in his compilation, The Writings of the Last Generation. According to Baal HaSulam, “We should not learn from the modern democracies, as they use various tactics to deceive the constituency. When [voters] grow wiser and understand their [leaders’] cunningness, the majority will certainly elect a management according to their spirit. And their [leaders’] main tactic is that they first create a good reputation for people and promote them either as wise or as righteous, and then the masses believe and elect them. But a lie does not persist forever.”Moreover, later in the book, Baal HaSulam writes, “Reality proves that the step following the ruin of a democratic government is that of Nazis or Fascists. …Whenever the democratic government is ruined, a fascist, Nazi regime will inherit it.” Indeed, the exposure of the fanaticism of American liberalism proves that Baal HaSulam’s analysis was dead on. The “liberals” are showing their true, fascist faces. Ironically, it was acclaimed liberal progressive author and journalist, Nicholas Kristof, who best described the liberal dichotomy in a column he wrote for The New York Times titled, “A Confession of Liberal Intolerance.” According to Kristof, “We progressives could take a brief break from attacking the other side and more broadly incorporate values that we supposedly cherish—like diversity—in our own dominions.” Today, without proper measures to mend America’s perilous trajectory, the fallouts for the American society and for the world at large could be horrendous.Establishing Sustainable Pluralism

A government whose leaders are in office for a fixed and relatively short term requires certain preconditions in order to succeed. While term limits guarantee that no leader becomes a monarch, they also compel candidates to vie for campaign funds and seek the benefit of their big donors every four years. This inevitably makes lawmakers and leaders hostages in the hands of a powerful few who exact their fees after the election, in complete disregard of the public interest. The inevitable outcome of this skewed system is a parade of puppet presidents who dance to the dictates of their donors, as we have seen for the past several decades. The wealthy elite are the real rulers of the United States; the “government”—a reality TV show.As Baal HaSulam said in the above quote, today’s heads of state cannot be elected unless they are advertised like a commodity until the public “buys” the stories sold about them. In such a state, the president is not elected based on leadership skills, but based on acting skills and amicability. Are these the right criteria for choosing a nation’s leader?To elect good leaders, people must determine what they want to see in a leader. If the constituency has the interest of the entire nation at heart, they will elect leaders based on the interest of the entirety of the country. In the case of America, for people to have such a broad view they must care for America, and especially for the American people, all American people.Lessons from the Past

In today’s era of extreme self-absorption, the only way to restore stability to the American society is to embrace plurality rather than reject it. If the liver and heart fought over blood because they both need it for survival, we would die. But their complementary functionality guarantees that we have a toxin free flow of blood to the entire body.Likewise, every person in humanity is important because health and strength are achieved when we unite above our differences, and not when we exhaust ourselves trying to be the last one standing. The constant battle we are fighting with each other is exactly how cancer behaves toward the rest of the body, and we know how this ends for the cancer and for us.When the ancient Israelites connected above their differences, they managed to build a nation out of millions of separate individuals. Once they pledged to unite “as one man with one heart,” they were tasked with passing the method for connection to the rest of the world. The Torah defined this task as being “a light unto nations” because today disunity is “darkening” people’s lives. When depression, violence, and alienation are engulfing all of humanity, unity is the only possible light at the end of the tunnel, however dim or faint.In Olat Raiah, the great Rav Kook wrote, “Unity that strives to benefit each individual is unsustainable. Even when it seems to grow, it will end in a flame of hatred and war among brothers, since each one is pulling in his own direction. However, unity that derives from recognizing the value of love of others will last and strengthen over time.”Indeed, Israel’s method for achieving unity can succeed precisely in a state of social disintegration and alienation because it is designed for such a state. It does not dread frictions; it embraces them as tools for achieving greater unity and social cohesion.My students all over the world carry out this method, which they titled, “Integral Education,” and prove repeatedly that people of different backgrounds can unite if they are willing to rise above their differences. They need not suppress their views like today’s intimidated supporters of the President.I think that America’s strength and stability are too important to the world for this country to behave recklessly. I think it must reinstate the value of embracing all views. Only when America does this can it begin to cautiously open its gates to immigrants. However, even then it must be done on condition that immigrants also embrace the values of pluralism and unity as the basis of democracy.In the coming years, the global challenges will increase and intensify. The basis for successful coping with these challenges is unity. If America establishes this, it will succeed. If not, it will end up like Europe.