The UN, the T-word and Israel

When is terror mentioned by the UN regarding Israel? 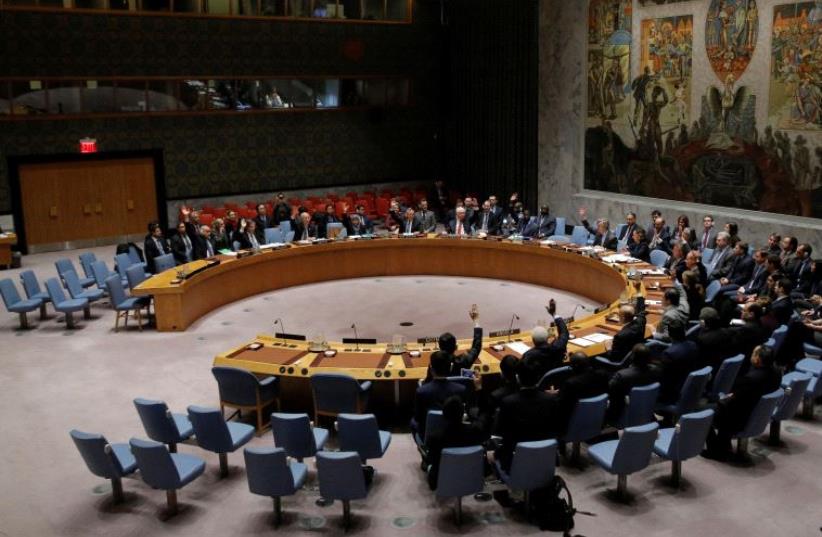 The United Nations Security Council
(photo credit: REUTERS)
Advertisement
Over the course of the past week, United Nations Secretary-General Antonio Guterres issued separate statements regarding four terrorist attacks that occurred in Asia and Africa, employing tough language to express his condemnation of the violence and bloodshed inflicted upon innocent people.The brief declarations make for interesting reading, for they embody in a nutshell one of the fundamental biases that much of the international community has embraced in how it views the Jewish state.Simply put, when it comes to the Palestinian murder of Jews, many shy away from using the word “terrorism” no matter how horrific or gruesome the incident may be.Take for example the unspeakable atrocity committed by Omar Abed last Friday night, when he entered the home of the Salomon family in the community of Halamish and proceeded to slaughter the grandfather, Yosef Salomon, aged 70, his daughter Chaya, 46, and son Elad, 36.The family had gathered for Shabbat dinner and were celebrating the birth of a new grandchild when Abed knocked on the door, burst in and began slashing and stabbing anyone within reach.Elad Salomon’s wife quickly took a number of small children into a room, locked the door and called police. Fortunately, a neighbor who serves as a sergeant in the IDF heard the ruckus, ran over to the Salomon home, and shot Abed.Only God knows what horrors the terrorist might have inflicted on the rest of the family, including the children, had it not been for the quick action taken by that brave young Israeli soldier.This is a straightforward case of terrorism, of sheer, unadulterated evil. What kind of human being posts in advance on Facebook his intention to murder, chooses a random house to invade and then shatters the Shabbat peace by stabbing an elderly man and his adult children at a family gathering? Nonetheless, in a tardy statement issued through his spokesman, the UN secretary-general could not bring himself to label the attack an act of terrorism, instead describing it as a “stabbing attack by a Palestinian perpetrator, which resulted in the death of three members of an Israeli family in the Halamish settlement in the occupied West Bank.”Leaving aside the awkward construction of the sentence, which should make any English-speaker wince, Guterres’ remarks are particularly stunning when compared with how he describes other attacks.On July 24, the UN chief said he “strongly condemns the terrorist attack in Lahore, Pakistan, today,” referring to a car bombing that killed more than two dozen people, and added that he “supports the efforts of the Government of Pakistan to fight terrorism and violent extremism.”Likewise, in another release issued the following day, Guterres denounced suicide bombings in northeastern Nigeria as “terrorist acts” and said that he “reiterates the United Nations support to the Government of Nigeria in its fight against terrorism and violent extremism.”And on Monday, when the Taliban carried out an attack in Kabul that killed at least 31 people, the secretary-general went so far as to say that it “may constitute a war crime” before reaffirming “the solidarity of the United Nations with the people and Government of Afghanistan.”Note how clear and unequivocal the world’s top diplomat can be when he puts his mind to it. But did you notice how he expresses support for the governments of Afghanistan, Pakistan and Nigeria, yet abstains from doing so when it comes to Israel? This is no mere oversight on the UN’s part, nor is it an issue of abysmal bureaucratic editing.On July 14, when Palestinian terrorists using weapons that had been stored on the Temple Mount murdered two Israeli policemen, Guterres condemned what he called “this morning’s attack by three assailants in the Old City of Jerusalem in which two Israeli police officers were killed and another injured.”Once again, there is no use of the word “terrorism” or any expression of solidarity with Israel, its government or people.There is clearly a pattern at work here, one which brazenly distinguishes between the blood of Israelis and others.If terrorism is the use of violence against civilians for the furtherance of a political or ideological agenda, then how can the UN or anyone else for that matter dare to duck their moral responsibility to decry Palestinian terrorism – yes, terrorism! – against the Jewish state? The American lexicon already includes names for offensive jargon, such as the “F-word” and the “N-word.” Apparently, when Palestinians murder Jews, Guterres and others would prefer to treat “terrorism” as the “T-word,” as though the very use of the term might prove insulting to those who slay the innocent.Some may view this as an issue of semantics but that is far from being the case. It is in fact a question of basic probity and ethics.If the UN secretary-general lacks the rudimentary courage to utter the words “Palestinian terrorism” then he should not be surprised when the moral authority of the organization he heads continues to plumb new depths.