The United Nations and its powers

Any attempt to impose the creation of a Palestinian state might well constitute an ultra vires act in violation of the UN Charter and international law. 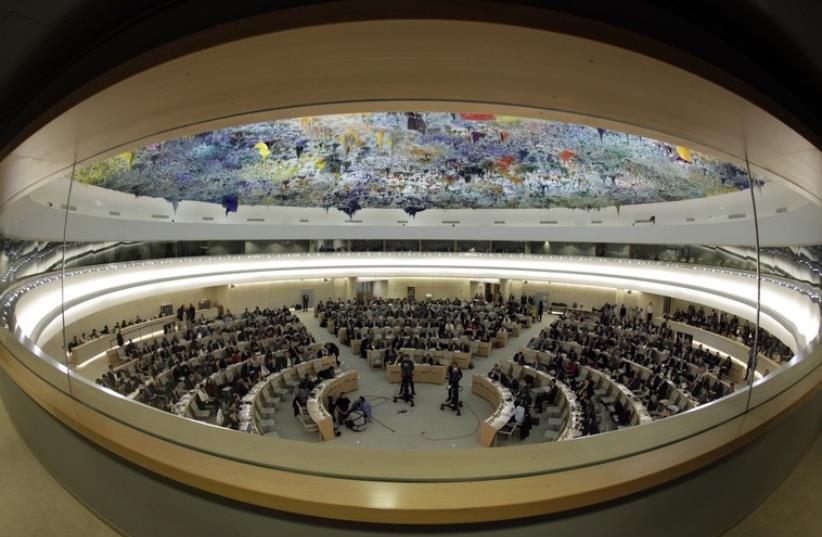 Overview of a Human Rights Council special session at the United Nations in Geneva
(photo credit: REUTERS)
Advertisement
The stalemate that has enveloped Israeli-Palestinian talks has prompted France (joined by New Zealand) to try its hand at invoking the UN Security Council to impose some sort of settlement on this near 70-year international dispute.No draft text has been published, but an earlier draft resolution prepared by France would seem to reveal the outline.The basic idea is to hark back to the 1947 Partition Resolution of the General Assembly that provided for the creation of both a Jewish state and an Arab state in the former British Mandate of Palestine. References to the 1947 Assembly resolution have long been abandoned, so the specific reference at this point to that resolution reveals what the promoters are intent on achieving. Security Council resolutions 242 and 338, adopted respectively after the 1967 Six Day War and the 1973 Yom Kippur War, are also cited so as to define the June 5, 1967 lines as the proposed basic border of the Palestine state.One need not enter into a detailed analysis of the proposal to recognize that it is designed to award the Palestinians a state without requiring them to make peace. According to this scheme, peace will come after they have a state – a fundamental error that also characterized the ill-fated 1993 Oslo Agreement, which was adopted in the vain hope that bringing PLO chairman Yasser Arafat back would usher in peace. Little wonder that Israel has vigorously objected to the French- New Zealand scheme. It places the cart before the horse and would set the stage for more violence and war, rather than pave the way to peaceful relations.
See the latest opinion pieces on our page
The scheme for a new UN initiative would hardly warrant much attention were it not for the fact that US President Barack Obama has hinted on more than one occasion that he would find it difficult now to veto such a scheme, although he had previously stymied such ideas. He has based his new attitude on a number of incidents during the recent Israeli election campaign and on the “character” of the new Israeli government that Prime Minister Benjamin Netanyahu has formed. These are flimsy excuses to warrant a sea change in American policy that endorses a wild gamble for peace that will only result in disaster. But given the new attitude of the White House, it is essential to examine the supposed basis of UN authority to impose a settlement without the consent of both parties. The General AssemblyChapter IV of the UN Charter establishes clearly that the General Assembly is basically limited to issuing non-binding resolutions. It has no power to adopt binding resolutions. This, however, raises the question of the competence of the General Assembly to adopt the 1947 Partition Resolution. Indeed, some scholars have maintained that resolution was not binding, since Palestine was not the property of the UN to dispose of in any manner. It was, in this view, an enabling resolution which legally facilitated the establishment of two states.Another opinion maintains that in the case of a Mandate, the General Assembly was qualified to adopt a binding resolution under international law. This conclusion is based on the 1950 advisory opinion of the International Court of Justice on the international status of South West Africa. The court ruled there that termination of the Mandate could be effected by the joint action of the Mandatory Power and the United Nations. In the case of the Palestine Mandate, this is precisely what took place. The United Kingdom turned to the UN to resolve the question, and the solution – partition – was accepted by the Mandatory Power. With that act, the General Assembly had completed its task and had become, in legal terms, functus officio, an organ whose competence has lapsed.Any attempt to revive the General Assembly as a continuing authority over the Palestinian Mandate is quite illusory.The Security Council In contrast to the General Assembly, the Security Council has both advisory powers under Chapter VI (Pacific Settlement of Disputes) and binding authority under Chapter VII (Action with respect to Threats to the Peace, Breaches of the Peace, and Acts of Aggression).However, it must be borne in mind that even the powers of the Security Council are defined by the purposes for which the United Nations was established.As Article 24 of the UN Charter states: “In discharging these duties the Security Council shall act in accordance with the Purposes and Principles of the United Nations”; and the UN’s primary purpose is “to maintain international peace and security.” It was a great British judge on the International Court of Justice, Sir Gerald Fitzmaurice, who had occasion to note that the Security Council, even when acting genuinely for the preservation of peace, may not “in the guise of peace-keeping order transfers or cessions of territory.” The Security Council is not empowered to effect legal changes “in territorial rights, whether of sovereignty or administration. ...It was to keep the peace, not to change the world order, that the Security Council was set up.”Any attempt to impose the creation of a Palestinian state might well constitute, in accordance with the words of Judge Fitzmaurice, an ultra vires act in violation of the UN Charter and international law.The author is professor of American Studies, emeritus, at the Hebrew University of Jerusalem and author of South West Africa and the United Nations (Johns Hopkins University Press) and Jerusalem in America’s Foreign Policy (Kluwer Law International).