The Western Wall and the occupation

The juxtaposition of the 50th anniversary of the occupation with the government reneging on the Western Wall arrangement caused me to have an epiphany: at root, both share the same fundamental cause. 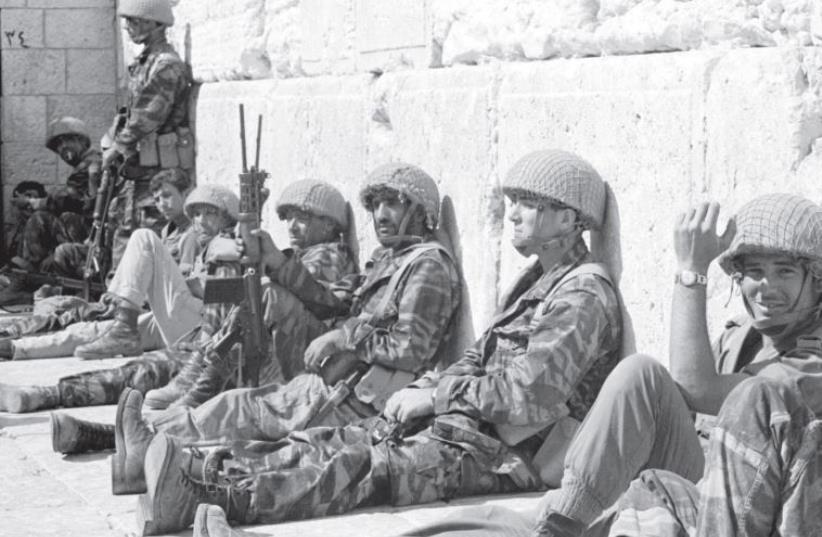 IDF soldiers sit in front of the Western Wall in June 1967 after it was captured during the Six Day War.
(photo credit: REUTERS/IDF HANDOUT)
Advertisement
There are two struggles going on in Israel today that liberal Jews care deeply about, and that are mostly viewed as completely separate battles.One is the now 50-year-old military occupation of the West Bank. Michael Chabon and Ayelet Waldman’s new book, Kingdom of Olives and Ash, a collection of essays on the occupation by 26 famous writers, provides a needed reminder of the alternate reality that lives on the other side of the rapidly disappearing Green Line.The other struggle is the battle for religious freedom for Jews in Israel. It’s a tragic irony that non-Orthodox Jews are less free to practice their religion in Israel than in any Western country. Sounds strange? What else would you call it when the only “acceptable” form of Jewish practice in Israel is Orthodox, and ultra-Orthodox at that.When my daughter got married six months ago, she and her fiancé wanted me to officiate at the ceremony.Since I’m a Conservative rabbi, they had to go to Cyprus first for a civil ceremony. If I officiated at their wedding in Jerusalem without having that off-shore paperwork done first, the wedding not only would not have been recognized by the state, we would have been criminals, actual law breakers.The current fury over the Netanyahu government’s decision to renege on a deal that had been struck to create a third space at the Western Wall, an egalitarian space, is the most visible symbol of the battle for freedom of religion for Jews in Israel, but it’s mostly a symbol. The real issues are far, far deeper and include everything from who can officiate at weddings, who can supervise conversions, who can call food “kosher,” who has access to public facilities such as mikvehs, and more.I’ve been engaged to a greater or lesser degree in both battles for 10 years, ever since I made aliya. They’ve been compartmentalized in my mind, with one not having much of anything to do with the other.The juxtaposition of the 50th anniversary of the occupation with the government reneging on the Western Wall arrangement caused me to have an epiphany: at root, both share the same fundamental cause: the abuse of power.Many people think that democracy is the ideal form of government. The problems we have in Israel highlight the shortcomings of democracy. The American system – a constitutional republic – is far superior, for a simple reason: it protects minorities from “the tyranny of the majority.”Majorities are capable of electing racists, homophobes, all sorts of unsavory characters. Without constitutional protections for minorities – such as Palestinians or non-Orthodox Jews – those groups can have their fundamental human rights trampled on by a coercive majority. Hamas and Hitler were both elected democratically.With Israel’s coalition government system, we have an even worse outcome: one minority (ultra-Orthodox Jews) can impose their will on not only a different minority, but on an actual majority of the people, who, polls show, would prefer freedom of religion for Jews.Politics is a rough-and-tumble game. Different groups will always push in favor of their interests, and unprotected minorities, whether it’s Palestinians or non-Orthodox Jews, suffer. Begging our politicians to be nice people isn’t going to fix the situation.The only way to make things right is for the people to insist that our politicians do the very difficult work of enacting a real constitution that would contain protections for minorities. It’s the only way to protect everyone from being abused by others when their group is not the group in power. In 1950 the Israeli government gave up on trying to bring a true constitution into law – it was too difficult, there were too many disagreements on what should be the nature of the state. A constitution would force us to really define in what ways we’re a democratic state and in what ways we’re a Jewish state.It will be really difficult to pass a constitution. But the ongoing abuse of power by certain factions shows how desperately it’s needed.The writer, a rabbi and businessman who normally makes his home in Jerusalem, is on an interim assignment as a congregational rabbi in Birmingham, Alabama.