The world from here: BDS: A weapon of Islamic warfare

Arab and Muslim leaders publicly declare the same goals as BDS activists; to eliminate Israel as a non-Muslim entity from lands that “belong” to Islam. 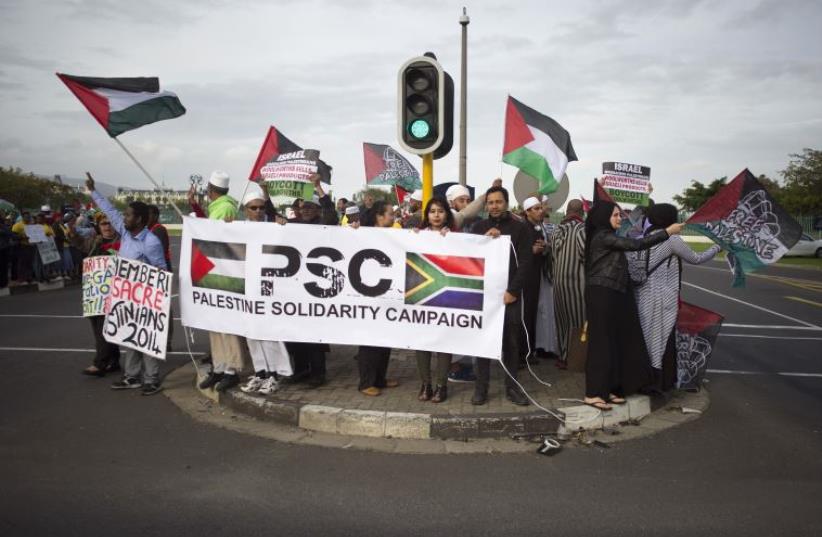 Supporters of the Boycott, Divestment and Sanctions (BDS) campaign protest in Cape Town [File]
(photo credit: RODGER BOSCH/AFP)
Advertisement
Hamas, PLO groups and the Palestinian Authority exploit the global Boycott, Divestment and Sanctions campaign as a tool of Islamic warfare.Arab and Muslim leaders publicly declare the same goals as BDS activists; to eliminate Israel as a non-Muslim entity from lands that “belong” to Islam. Following the al-Aksa war of terrorism in 2001, leading Muslim Brotherhood scholar Sheik Yusuf Qaradawi published an Islamic legal ruling (fatwa) on boycotting Israeli goods. Iranian Supreme Leader Ayatollah Ali Khamenei did the same. For Islamists, the reason is simple: Since the existence of Israel is an affront to Islam, as former Syrian leader Hafez al-Assad, himself an Alawite and therefore not a true Muslim in Sunni eyes, declared throughout his life, any strategy and every tactic to rid the world of Israel is acceptable in service of advancing Islam as a victorious and conquering civilization.Palestinian affairs analyst Khaled Abu Toameh reminds us of Hamas’s support for BDS. He writes in a Gatestone Institute brief that, “Senior Hamas official Izzat al-Risheq, heaping praise on BDS advocates and activists openly, admitted that the ultimate goal of the BDS campaign was to destroy Israel.” Risshek said, “We call for escalating the campaign to isolate the occupation and end the existence of its usurper entity.” Yair Lapid, former finance minister and head of the centrist Yesh Atid Party put it bluntly. He said, in June 2015, speech “the BDS movement is actually a puppet in a theater operated by Hamas and Islamic Jihad.”Palestinian BDS leader Omar Barghouti has expressed the same view. He has stated in classic Islamist tradition: “Definitely, most definitely we oppose a Jewish state in any part of Palestine. No Palestinian, rational Palestinian, not a sell-out Palestinian, will ever accept a Jewish state in Palestine.”Hamas, Fatah, PLO factions, Islamic State (IS), al-Qaida and other Islamist groups believe they are following the rules of warfare laid down by their prophet Muhammad and his companions. These rules are found in the Koran, the hadith, the Sharia and the Sira, the biography of Muhammad written about 150 years after his death.In short, anything is acceptable in order to advance Islam.The ultimate goal is to make the whole world convert or succumb to Islam. There are arguments among Muslims as to how to accomplish this goal, but the end result is the same. This war – between Dar al-Islam (Arabic: the world that Islam rules) and Dar al-Harb (the world of war – i.e., the world which will eventually succumb to Islam) – is eternal. There is no compromise. The eventual goal: The whole world is to be ruled by a caliph, under Sharia law.Aside from shared goals, how is BDS a weapon in the Islamic arsenal? According to the Sharia, anything that spreads Islam can be used. That includes military means, to which the widespread stabbings and beheadings across the Middle East attest. But Islamic warfare also includes “soft power” weapons such as diplomacy, politics and PR campaigns such as BDS and other political initiatives.The Palestinian issue is an Islamic issue, because, according to Islamic law, once a territory is captured by Muslims, it remains Muslim forever. Spain, for example, was captured in 712 and remained under Muslim rule until 1492. From a Muslim point of view, Spain will remain Islamic territory forever and will ultimately be ruled by Muslims. Israel was conquered by the Muslims in 637, Therefore, from a Muslim point of view every inch of pre-1948 British Mandate Palestine is Muslim, irrespective of 1948 or 1967 “borders.” Notably, Arab Muslim powers insisted that the 1949 “armistice lines” delineating de facto borders between Israel and its Arab neighbors be labeled only as “armistice lines” because the Muslims could not recognize the Jews as having rights to rule over any inch of Islamic territory.Why couldn’t the Muslim Arabs recognize Israel, and why won’t they now? Because Islamic religion and culture forbids this, and any Muslim leader who recognizes Israel’s right to exist as a Jewish state would, with time, be killed – this is precisely why former Egyptian president Anwar Sadat was assassinated by Islamists in 1981 after he signed a peace agreement with Israel.Since the founding of the State of Israel, we have witnessed campaign after campaign by the Arab Muslim world – using any tool possible – to delegitimize Israel internationally. The United Nation’s 1975 “Zionism is racism” resolution transformed former PLO leader Yasser Arafat into the international poster child for the Arab Muslim assault on Israel’s legitimacy. It also served as an historical underpinning of the global BDS movement.Islamic warfare uses what we in the West call terrorism – irhab in Arabic – and all other means to strike fear in the hearts of their enemies, causing their enemies to flee. Muslim conquerors then march in to take what their enemies left behind, including possessions and land. The Koran says, “And prepare for them whatever power and whatever garrisoned horses you can, to [spread] fear into [the hearts] of the enemy of Allah and your enemy, and others, apart from them [i.e., besides them] that you do not know; Allah knows them. And whatever you expend in the way of Allah will be repaid you in full, and you will not be done an injustice.”The international BDS campaign is also designed to strike fear in the hearts of Israelis, demoralize them, with the goal of causing the isolation of Israel internally and internationally in order to cause its implosion. Leading BDS activists such as As’ad Abu Khalil have confirmed that, “The real aim of BDS is to bring down the State of Israel.”As Abu Toameh has urged us to understand, in Hamas’s case, Risheq’s remarks reflect Hamas’ aspirations that “BDS paves the way for the destruction of Israel through boycotts, divestment and sanctions.” Abu Toameh added that “Hamas believes that such tools are no less important than rockets and suicide bombings, which have thus far failed to achieve the goal of wiping Israel off the face of the earth.”

Dan Diker is Fellow and project director, Political Warfare, at the Jerusalem Center for Public Affairs. He is also a Research Fellow at the International Institute for Counter terrorism at the IDC Herzelia. Dr. Harold Rhode is a distinguished Senior Fellow at the Gatestone Institute and served as an Islamic Affairs Analyst at the US Department of Defense for 28 years.
Advertisement
Subscribe for our daily newsletter