The zero hour of Greece: Turning minus to plus

The current crisis, and every crisis, is a tremendous opportunity for growth, maturity and development for all involved. 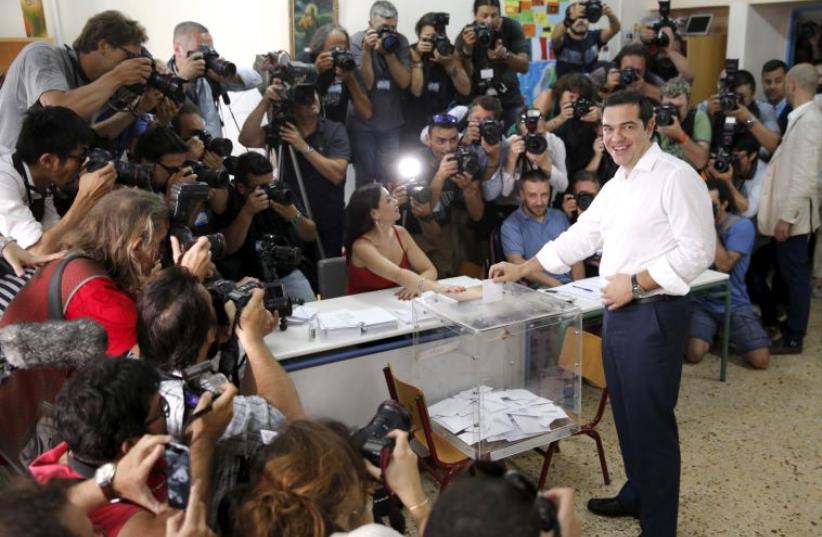 Greek Prime Minister Alexis Tsipras votes at a polling station in Athens, Greece July 5, 2015.
(photo credit: REUTERS)
Advertisement
Greece has come to its zero hour. On Sunday, July 5, Greeks were called to vote for either a yes to Europe, the Euro and austerity or no to the same package. The third alternative has been pushed aside for seven years now as the various governments that headed Greece could not bring themselves to see it. Greeks in the US saw it, Greeks in Europe saw it, but somehow the Greeks in Greece failed to see it.But let me start with what the idea of turning minus to plus means and give credit to its originator, Dr. Doron Kaufman, an Israeli composer whom I first met at Jewish summer camp in Greece some 30 years ago, where he was entertaining the kids with his accordion. A native Israeli, Doron has been a very close friend over the years. His latest approach when speaking about his life is how he manages to turn around reality and travel the distance that brings him from minus – a feeling of lack and of something being wrong – to a sense that things work. But turning things from minus to plus, in addition to being an attitude and a philosophy also involves earthly manifestations: work, action and impact in the material world.And let me just make it clear now that I write these words because I care. I am a Greek woman currently living in Jerusalem, and watching Greece at its zero hour from a distance thinking to myself: how can we help Greece get back on its feet again? How can we help Greeks get their dignity back, their lives back and their livelihoods back? My father called me yesterday from Athens sharing how he would be receiving half of his pension money, at eighty years of age. Asked as to how the current situation affects him, he responded, “I’ve been through the Holocaust. I can live through this.”“Problems cannot be solved by the same level of thinking that created them” Albert Einstein reminds us. And the Greeks in Greece seemed to only consider the option of debt and more debt, asking for more and more from our creditors to stay afloat. Turning minus to plus, in contrast, says you owe 1.7 billion euros to the IMF, find a way to pay them back ASAP and move on. Companies raise money, NGOs raise money, philanthropic causes raise money. Countries can raise money too. Companies campaign, NGOs campaign, philanthropic causes campaign. Countries can campaign too.Rather than the “poor me” attitude of need and lack, Greece can bring its brilliant entrepreneurial minds together and come up with a win-win fundraising campaign to first pay the debt and then allow for some more to rebuild the institutions that were hit by the crisis. Moving from minus to plus involves an awakening from passivity to activity, from shunning responsibility to taking it upon us, from expecting miracles to happen to making them happen. And in order to campaign and raise the money in question you need to have a story that moves people, that touches them and inspires them to be part of the change. A story that is creative and invigorating, a story that you want to be part of, a story that makes history.The current crisis, and every crisis, is a tremendous opportunity for growth, maturity and development for all involved. Greece’s fundraising campaign of 1.7 billion euros can become a force, a raison d’etre for Greeks and philhellenes worldwide to restore the dignity and freedom of Greece. A people-to-people solidarity project that transcends governments, borders, religions, color and nationality could turn minus to plus. The world and Greece have all that it takes to make it happen!

Yvette is a native Greek who lives with her family in Jerusalem. She is the author of the poetry collection They All Sound Like Love Songs, Women Healing Israeli Palestinian Relations.