Think About It: The French legislative elections

Israel is unlikely to come across a situation similar to the current one in France – at least not in the foreseeable future. 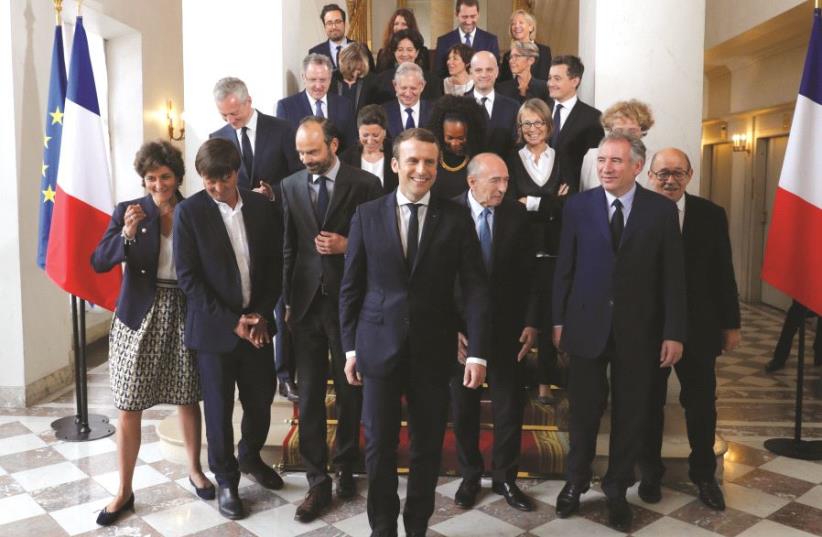 Emmanuel Macron et son gouvernement
(photo credit: REUTERS)
Advertisement
At the time of writing the results of the second round of elections to the National Assembly in France were not yet known. However, it is predicted that the party of President Emmanuel Macron – La République en Marche! (REM) – will receive a majority of the 577 seats in the Assembly.No matter what the final results are, there is no doubt that we are speaking of a political revolution by peaceful means, or what we called in Israel after our 1977 election – an upheaval.The difference between what happened in Israel and what is occurring in France is that in Israel the upheaval resulted in the main opposition party during Israel’s first 19 years of existence – the Likud – replacing the party that formed all of Israel’s governments during those 19 years – the Labor Party, while in France a totally new party – the REM – established by France’s new president a year ago from scratch, has more or less wiped out most of the old political establishment and its representation in the Assembly, and especially the Socialist Party (the party of previous president François Hollande) that had 280 seats in the previous Assembly and will have only a handful of seats in the newly elected one.Something similar happened in Italy as a result of the 1994 elections, which ended with the electoral victory of Silvio Berlusconi’s Forza Italia – also a totally new political party, led by a newcomer to politics. Even though Forza Italia received only 132 seats out of the 630 of the Chamber of Deputies, the socialists and communists together lost 163 seats.While the Italian upheaval, which began in the 1992 elections (in which the two major parties, the Christian Democrats and the Democratic Party of the Left, lost 98 seats) resulted from a major corruption cleanup effort, in France the upheaval is the result of a general disgust of the public with the old political élites, and unresolved social, economic and political issues – including the immigration problem, fundamental labor issue, and terrorism.What is similar in both situations is that two completely new figures in politics – Berlusconi and Macron – both from the Center (though Berlusconi can be defined as Center-Right and Macron as a Social Liberal), won their elections with no previous political experience, and at the head of totally new parties, made up of persons many of whom were more or less “picked off the street.” In both cases the parliament – the Chamber of Deputies in Italy and the National Assembly in France – was filled with members without any political and parliamentary experience, and without any “party elders” able to teach them how the system works.This situation is totally different to that in the United States, where the last presidential election, won by Donald Trump, reflected a revolt against the old elites, and the policies of globalization and extended social and human rights (to be replaced by “America first” and “personal freedom”), but where the simultaneous congressional elections did not oust the old Republican and Democrat elites, and Congress remains full of experienced veteran politicians.After the first round in France, political pundits commented that if the predictions are realized, there will hardly be an effective opposition in France, and true to the French tradition one should expect opposition to manifest itself in the streets.I haven’t heard any of the commentators wondering how a parliamentary majority made up of total novices, without a clear ideology and agenda, party elders, or institutional memory, can function.Experts in legislative studies have found that in most democracies, first-time parliamentary representatives have close to no knowledge about what their new job entails, and what the basic rules of the game are.True, all parliaments around the world offer new members induction programs, but these deal primarily with technical matters, such as members’ rights, and where they can receive various services, rather than with the essence of the job, the various tools available for its fulfillment, and certainly not with an introduction to effective parliamentary tactics. In short, for their socialization, new members must depend on the experience of veteran members of their parliamentary groups. The new deputies of the REM simply won’t have anyone to consult. This could lead to a rather chaotic situation.The fact that Macron has already chosen as his prime minister a member of the outgoing National Assembly from the Republicans’ Party (LR – Nicolas Sarkozy’s renamed party), Édouard Philippe, who decided not to run in the current elections to the National Assembly, is proof of the fact that he realizes that he needs around him some experienced politicians.This does not necessarily mean that he will have the support of a shrunken LR in the new National Assembly (the LR will probably lose most of the 194 seats it had in the previous Assembly), but if he has its support, this might provide the deputies from the REM with some much needed parliamentary patronage – at least in the beginning.Though as mentioned above Israel has had its political upheavals, Israel is unlikely to come across a situation similar to the current one in France – at least not in the foreseeable future. The fact that Israel has a proportional representation electoral system and highly sectoral voting patterns are the main reasons for this.From time to time some new centrist party emerges, but then disappears again, but only once did such a party – Kadima – which in the first instance was a breakaway from the Likud, actually managed to form a government. But it too vanished after two terms in opposition.The only occasions when the opposition in Israel found itself small and weak was when there were national unity governments made up of the two traditional political parties: Labor and the Likud. There has never been an election in which a majority of the 120 MKs from the outgoing Knesset has been replaced.