Think about it: Who can replace Netanyahu?

Replacing Netanyahu has been made more difficult by his deliberate and systematic blocking of the advance of any potential contenders for leadership within the Likud. 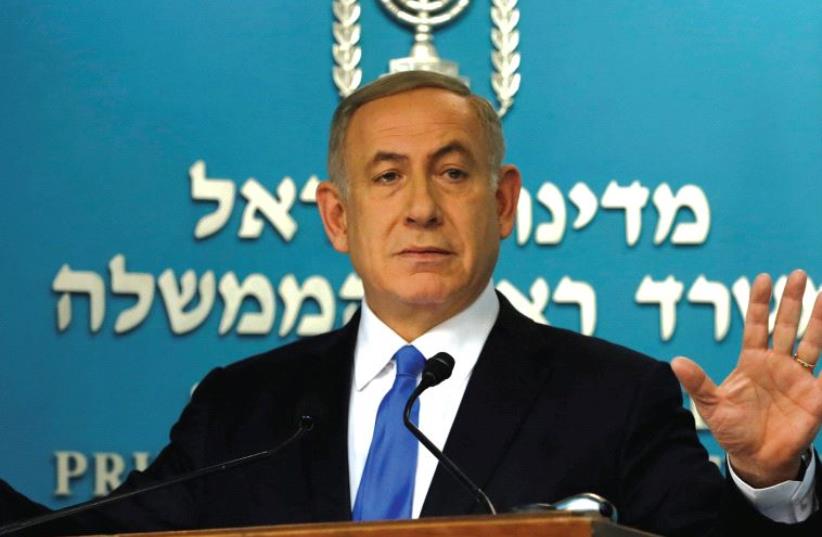 PRIME MINISTER Benjamin Netanyahu responds to the speech given in Washington on Wednesday by Secretary of State John Kerry.
(photo credit: REUTERS)
Advertisement
Who can replace Netanyahu? Against the background of Prime Minister Benjamin Netanyahu’s embarrassing comments to the inhabitants of Amona about his experience of leaving the official Prime Minister’s Residence in 1999 and recommendation to the inhabitants of northern Israel to purchase apartments, implying that it would be a good investment, his hysterical reaction to the inevitable UN Security Council resolution on Jewish settlements in the West Bank, which turned his claim that Israel’s foreign relations are thriving into a bad joke, and his apparent inability to understand that a public figure must be extremely careful in his relations with wealthy patrons, lest he be accused of ethical and possibly even criminal transgressions, the conventional wisdom that he is irreplaceable reflects an inexplicable pessimism.True, replacing Netanyahu has been made more difficult by his deliberate and systematic blocking of the advance of any potential contenders for leadership within the Likud, and the problematic identity of the leaders of the parties that could realistically replace the Likud as the leading political force in Israeli politics.It is perhaps a reflection of Israeli history that all those who try to identify a potential replacement for Netanyahu from within the Likud or some other party almost inevitably come up with the name of a former Ashkenazi chief of staff. Since there are no former chiefs of staff left in any of the political parties since Moshe Ya’alon left the Likud in a huff, there are all sorts of scenarios of former chiefs of staff somehow appearing or reappearing, either as leaders of an existing party, or as founders of new ones.There are also some who view MK Yair Lapid as a potential replacement for Netanyahu, largely because for some time now opinion polls show his party – Yesh Atid – emerging with the largest number of seats if elections were to be held today. The question is whether if this prediction materializes, Lapid will manage to form a government, and if he does, whether his rather superficial populism won’t lead to our actually missing Netanyahu.But are these the only alternatives? As a regular viewer of the Knesset TV channel I am in the habit of scouting for MKs that I would be happy to see in leadership positions.One such MK is Meir Cohen from Yesh Atid – a former high-school headmaster and mayor of Dimona (on behalf of Yisrael Beytenu), and minister of welfare and social services in Netanyahu’s previous government.Cohen was born in Morocco, and lived in Yeruham after immigrating to Israel in 1961 with his parents at the age of six. Today Cohen’s party is in opposition, and he serves as one of the deputy speakers. Unlike most of the Likud’s members of Moroccan origin the intelligent and knowledgeable Cohen speaks calmly and moderately, and chairs the Knesset plenum – not an easy forum to manage – with a combination of firmness, serenity and dignity, which are qualities I would like to see in a prime minister. But whether he has what it takes to head an incoherent coalition, and lead a country with serious existential challenges such as those that Israel faces, I don’t know. I also do not know whether he has the political clout to break away from the leader of his party – Lapid – and embark on an independent political path.Avi Gabbay – another Mizrahi figure I would be happy to see as prime minister, and who I believe would bring with him a welcome new style and spirit to the post – was environmental protection minister until six months ago, on behalf of Kulanu, when he resigned from the government against the background of Ya’alon’s replacement in the Defense Ministry by Avigdor Liberman.Gabbay had participated in the establishment of Kulanu but chose not to run on its list in the last elections. Even though he states that Kulanu leader Moshe Kahlon’s heart is in the right place, he was disappointed with Kahlon’s failure to stand up for his principles in the government. He himself was the only minister to vote against the natural gas outline, which he considered to be shrouded in corruption from its inception and a very bad deal for the state and its citizens.Gabbay, who was born in a poor Jerusalem neighborhood in 1967, had a brilliant career in the budget department of the Finance Ministry, in telecommunications giant Bezeq before and after it was privatized, and finally in the promotion of various business ventures, before joining Kahlon in establishing Kulanu.After originally shying away from full political involvement, he has now decided to dive into the political quagmire. Since he has reservations about parties founded by individuals who preserve full control over them, he chose the Labor Party despite its admittedly problematic current condition.Gabbay speaks in favor of a Rabin inspired security approach, believes in the need of a serious overhaul of Israel’s public service and in the need to uphold the rule of law, is worried by Israel’s growing political isolation, and its movement away from the two-state solution, and supports a “free market with compassion”.Though Gabbay rarely alludes to his Mizrahi origins, in a recent interview with Ilana Dayan on TV channel 2 he stated that it is high time that the list of potential Prime Ministers included Mizrahi names, hinting that his might be one of them.Will his bet on the Labor Party pay off? Only time will tell.