Compared to other states in the Middle East, Saudi Arabia’s civil society is significantly underdeveloped. 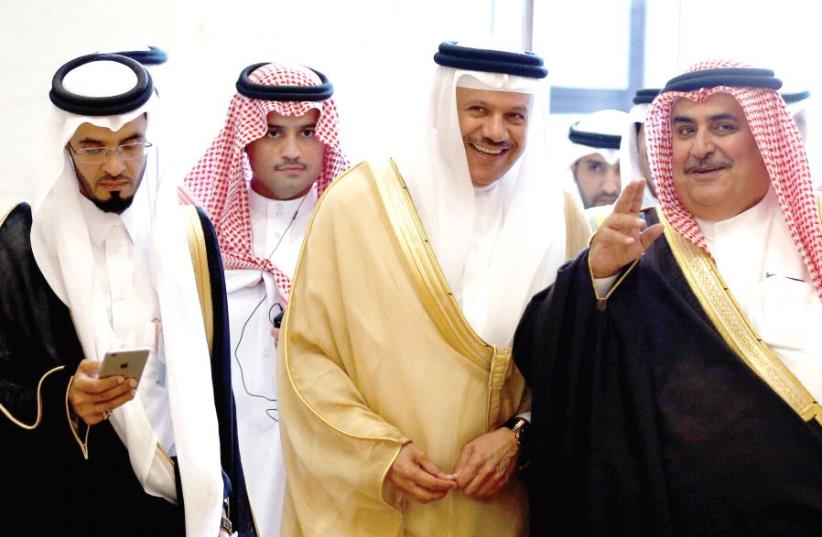 Secretary-General of the Gulf Cooperation Council Abdullatif bin Rashid Al Zayani and Bahrain’s Foreign Minister Khalid bin Ahmed Al Khalifa walk during a meeting of foreign ministers of GCC member states, in Riyadh, Saudi Arabia, in March
(photo credit: REUTERS)
Advertisement
In April 2016, King Salman of Saudi Arabia announced the bold and ambitious Vision 2030, a blueprint for achieving the kingdom’s longterm goals through economic and political reforms.The scope of Vision 2030 is unprecedented, as Faisal bin-Farhan Al Saud, an adviser to the Saudi Foreign Ministry notes, “Vision 2030 is not just a program for economic reform, it is a true effort at national transformation.”This initiative, developed by the new crown prince, Mohammed bin-Salman (MBS), seeks to diversify and expand the economy, moving it away from dependence on petroleum and state-run enterprises, while also introducing government reforms to enhance transparency and public engagement.With this focus on reforming the public sector and expanding the private, the Saudis have largely ignored the role that the third sector, civil society, could play in realizing Vision 2030.Compared to other states in the Middle East, Saudi Arabia’s civil society is significantly underdeveloped.The authoritative Think Tanks and Civil Societies Program at the University of Pennsylvania recognizes only 10 think tanks in the country; other major nations in the region have far more: Egypt 39, Iraq 31, Turkey 46 and Iran 67. As a whole, Saudi think tanks are rarely recognized among top-tier organizations globally or even regionally. While state restrictions limit the third sector, there is an informal civil society developing through socio-cultural groups and policy debates among youth on social media. Although many Saudi citizens want a more active, formalized role, the state’s suspicion of dissent prevents this.Given the ever-wary Saudi royal family, the public sector’s monopolization of power and the dearth of independent think tanks can be expected, however, Vision 2030 offers an opportunity to develop the kingdom’s third sector to support this grand plan.By 2030, Saudi Arabia intends to have over 450 social and cultural clubs, but a new 2016 NGO law, which eased the requirements for forming organizations, reinforced the ban on political groups. On the Vision 2030 website, MBS states, “We will be transparent and open about our failures as well as our successes, and will welcome ideas on how to improve”; however, this opening clearly applies only to socio-cultural groups that have little influence on decision making.To truly reap the benefits civil society, Saudi Arabia needs to empower it to discuss the complex problems facing the country.Enabling civil society to expand beyond a socio-cultural focus and support the implementation of Vision 2030 would offer tangible benefits for the kingdom. Currently, the government is the sole force in developing, initiating and executing reform, and think tanks could bring innovative ideas to the process. By distributing duties to think tanks, the Saudis could also begin the reduction of the bloated public sector through privatization, a key goal of Vision 2030.In addition, think tanks could serve as a counterweight to entrenched conservative forces within the government that reject Vision 2030. Moreover, the Saudi government has often hired leading global consultancy firms, such as McKinsey & Company, to analyze the kingdom, but Saudi think tanks could serve as in-country advisory organizations, able to better understand the kingdom and suggest implementable, bespoke reform policies. If the Saudis truly want to achieve their Vision 2030, developing topflight think tanks is imperative.Although the development of a genuinely efficacious third sector is a long, complex process – like Vision 2030 – there are some concrete steps that the Saudis could take to accelerate it. First, as stated earlier, they should formally empower civil society to assist with the implementation of the Vision 2030 plan; this would show the Saudis are serious about encouraging dialogue between the state and people.Second, they should establish an elite, professional track for selecting and training Saudi citizens in economic, political and foreign policy issues at top domestic and global institutions.By offering opportunities to Saudi students and graduates, the government could create jobs and bring citizens into the political process. Third, the Saudi government should tell the think tank community what it truly needs, whether short-term, industry-specific policies or long-term predictive analyses. Free from the restrictions of governance, Saudi think tanks could offer outside yet in-house expertise that could be tailored to particular challenges.While implementing Vision 2030 and opening a space for civil society could radically alter the long-established socio-political contract between the kingdom and its citizens, to truly reap the benefits of reform Saudi Arabia needs to actively nurture world-class think tanks and enable them to augment reform efforts.

The author is a student at University of St Andrews and research intern at the Think Tanks and Civil Societies Program at the Lauder Institute, University of Pennsylvania.