Roosevelt should get credit for saving a lot more than 200,000. 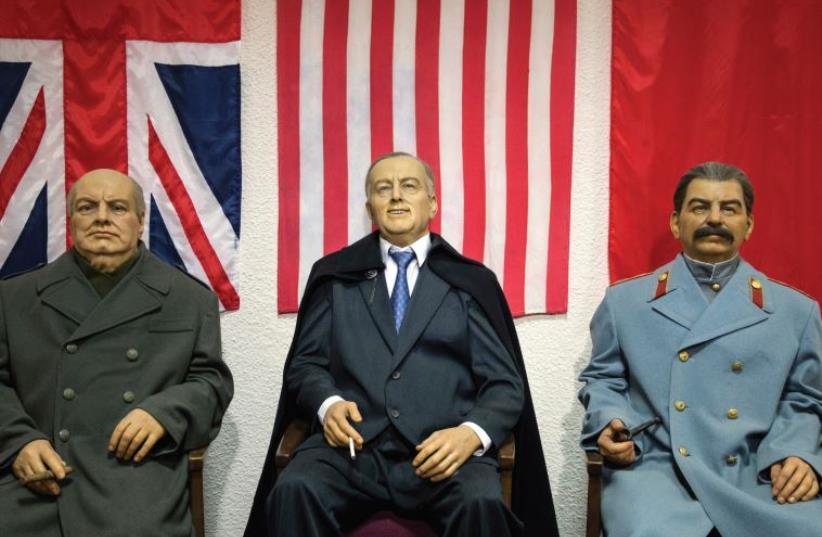 A WAX figurine of Franklin Roosevelt on display at Yalta earlier this year.
(photo credit: REUTERS)
Advertisement
The revisionist case in defense of president Franklin D. Roosevelt’s response to the Holocaust was significantly expanded last week, as a prominent historian at the US Holocaust Museum claimed that FDR “saved” hundreds of thousands – perhaps even millions – of Jews from the Nazis.This surprising assertion was made by Professor Richard D. Breitman, the editor of the museum’s scholarly journal, during an October 21 public program at the museum on “FDR and the Holocaust: A New Appraisal.”“Roosevelt’s decision to focus on the European war actually saved more Jews than anything else that was done for them,” Breitman declared, “because if he had focused on the war in Asia instead, then the European war would have gone on longer and more Jews would have been killed.”How many Jews, exactly, did FDR save? Breitman’s reference to “anything else that was done for them” must include the efforts of the War Refugee Board (a US government agency to which Roosevelt gave almost no support). Historians calculate that the board helped rescue about 200,000 Jews, so if Roosevelt’s actions “saved more Jews than anything else,” he must have saved more than 200,000.Actually, according to Breitman, Roosevelt should get credit for saving a lot more than 200,000. In his recent book FDR and the Jews, Breitman claimed that Roosevelt should also be credited with “saving” the 500,000 Jews of Palestine.How so? According to Breitman, since FDR approved the transfer of tanks to the British in 1942 – and since those tanks helped the Allies when they liberated North Africa – and since if the Germans had won in North Africa, presumably they would have conquered Palestine – and since if they conquered Palestine they would have murdered all of the 500,000 Jews living there, then that means Roosevelt “saved” those Jews.So that’s a total of over 700,000 that President Roosevelt “saved.”But why stop there? If one is searching for ways to pad FDR’s stats, there is no reason to leave out Soviet Jewry. After all, if America didn’t fight Germany in World War II, the Russians would have been on their own and might have lost – meaning that the Germans would have murdered another two million Soviet Jews (in addition to the more than a million they slaughtered in western Russia in 1941-1942).And if FDR had not led America to victory in World War II, the Nazis eventually would have conquered the United States, too – and killed all of the nearly five million American Jews. That brings to almost eight million the number of Jews Roosevelt “saved.”The problem with this entire argument, of course, is that none of the actions for which Prof. Breitman is praising FDR were taken in order to help the Jews. They were wartime decisions, made for the sake of the war effort. FDR did not “save” those Jews. Their survival was a completely accidental byproduct of what was happening on the battlefield.Since FDR did not save Jews, his defenders have to redefine the term “saving” in order for Roosevelt’s actions to qualify. That’s what we call moving the goalposts.This kind of sloppy thinking is unbecoming of a serious historian.But more than that, it is cause for concern about the entire approach that the US Holocaust Museum is taking in its presentation of this crucial chapter in Holocaust history.When the museum opened in 1993, skeptics wondered if a museum funded by the US government would be willing to acknowledge the US government’s failures during the Holocaust. Now the skeptics’ warnings are about to be put to the test. At last week’s program, it was announced that the museum has begun preparing a major new exhibit, to open in 2018, on America’s response to the Holocaust. If that exhibit is going to be shaped by the partisan and erroneous view of FDR as the Jews’ savior, it will mean that the skeptics had a point, after all.

The author is the founding director of The David S. Wyman Institute for Holocaust Studies, and coeditor of the Online Encyclopedia of America’s Response to the Holocaust.
Advertisement
Subscribe for our daily newsletter