"At about 4:45 a.m., I was woken up by our dog barking and yelping... I stared dumbfounded and barefoot in the face of the flood..." 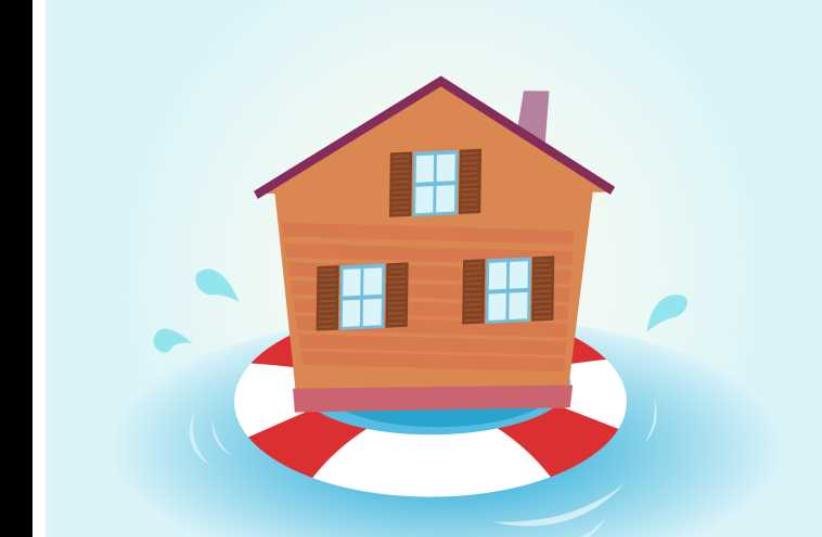 A flood
(photo credit: ING IMAGE/ASAP)
Advertisement
When we were considering buying a dog for our family four years ago, I had three conditions: that it not shed (because I’m allergic to dog fur), that it not poop (because no way was I going to be picking up warm dog droppings daily) and that it not bark (as a chronic insomniac, I’d be quickly enraged if what little sleep I did get were interrupted).Well, one out of three ain’t too bad: Our little white Maltese has hair, not fur, so I don’t sneeze, but he does need to relieve himself (and as a good citizen, I clean up after him). And of course, he’s a dog, so he barks.The latter probably saved our house from some pretty severe water damage recently. Remember that freak thunderstorm a couple weeks back that dropped an 38 mm. of rain and hail on Jerusalem starting at about 3 a.m.? Before daybreak, the city had received more rain than the average 23 mm. that usually falls during the entire month of April.At about 4:45 a.m., I was woken up by our dog barking and yelping. I tried to ignore him, hoping he’d knock it off after a few minutes, but he kept at it, becoming ever more frantic. So I got up and made a quick pit stop in the bathroom before checking on him downstairs. My feet sloshed into water.
See the latest opinion pieces on our page
I called out to my wife, Jody, whom I had heard using the bathroom a few minutes earlier, so I assumed she hadn’t fallen back asleep yet.“Is the floor supposed to be wet?” I asked, a question that could only have made sense when twisted through the still-strong influence of the sleeping pills I’d taken earlier in the evening. I groggily turned on the light in our bedroom.There was water coming through the door from the living room, reaching almost up to the tail end of our bedspread.The living room was flooded. The old Chinese carpet that has been in the family for 40 years was sporting strange brown stains. Water was heading under the couches, moving toward the stereo and the CDs; it was cascading down the stairs into the kitchen and then down the second set of stairs toward the kids’ bedrooms.I stared dumbfounded and barefoot in the face of the flood. Jody was quicker- witted than I was in my Zopiclone-induced stupor and quickly determined it was coming from the front terrace; the ferocity of the downpour had overwhelmed the two drains, the only ones where we had not installed a plastic guard against leaves and other debris from the planters above.For the next hour, we threw down towels to stop the flow, and Jody, in pajamas, boots and a raincoat, cleared leaf after leaf and squeegeed the water back down the drain while lightning confronted the pre-dawn sky. About halfway through, I finally woke up enough to realize that I ought to put on shoes, too.As I was squeezing out towels and tracking stray streams across the house, I thought: Home-owning is a bitch. But then I remembered what it was like to be a renter, and the thought of calling our old ba’al habayit (landlord) at 5 a.m. made me glad that this was our problem and nobody else’s.I was also well aware that things could be far worse. Earlier in the week, I had paid a shiva call to my cousin, whose mother, my Aunt Claire, had passed away at the age of 92. He told me a story about how, on her honeymoon, the cottage where she was staying caught fire and burned down. Claire escaped unhurt, but her groom sustained burns over half his body.Infection set in, and he only survived because, as an American serviceman, he was first in line for a then-non-standard treatment: Penicillin.When it was clear we’d bested the flood, I realized the dog needed a walk.It was 5:30 a.m., but he’d been upset and it wouldn’t be humane to put him back to bed without at least giving him the opportunity to do his business first.I put on my coat and leashed him up. As I opened the front door, my next-door neighbor was standing there with a frying pan.“Did your house flood, too?” I asked. “No,” he replied. “But our electricity is out.”We went downstairs, where I assumed he was planning to flip the switch on the fuse. Instead he walked right past the electrical cabinet, opened the door to the garage, got into his car and drove off, frying pan in hand, leaving his house dark and damp.I went back to bed puzzled. Was he planning to wake up his electrician in the middle of the night and clobber him into coming over with that frying pan? Maybe since they had no electricity, he was going to a friend’s house to whip up some eggs? He could have done that at our house.The answer came the next morning when I ran into him blow-drying his soaked electric box while waiting for the electrician: It turns out he gets up at that hour every morning to use the mikve (ritual bath), and he had a new frying pan that needed toiveling (immersion before use).The dog, by the way, had stayed dry in his bed – the water hadn’t made it to that point in the house yet, although it was coming close, and had we not gotten up in time, he would have been one wet Maltese. Rather, he had been upset by the thunder, which continued unabated until the sun finally rose.We let him sleep in our bed for the rest of the morning – something we never do. After all, with his barking, he’d earned it. (I can still do without picking up the poop, though.) The author is a freelance writer who helps companies, brands and organizations become their own publishers, in order to rank higher on social media and search engines. www.bluminteractivemedia.com.