This normal life: Finding your place 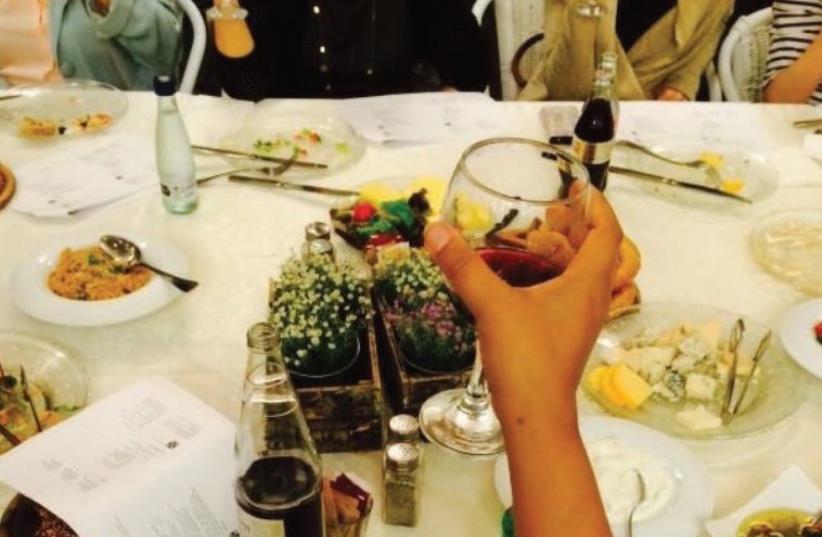 Raising a glass at the Turning the Tables Seder
(photo credit: TTT)
Advertisement
I’m a Haggada hoarder.Over the years, our family has collected dozens of different Passover Haggadot, ranging from the highly traditional to the decidedly modern. We have classic Haggadot with commentaries by the Me’am Lo’ez (originally written in Ladino by Rabbi Ya’acov Culi in 1730), Rabbi Marcus Lehman of Mainz (late 1800s) and Efrat Chief Rabbi Shlomo Riskin (a bit more recent – from 1983). Plus a highly annotated ArtScroll Haggada that’s 225 pages long.On the more progressive side, there’s the Carlebach Haggadah with a selection of teachings from the famed singing rabbi; the liberal, egalitarian Velveteen Rabbi’s Haggadah; and the wonderful A Night to Remember: The Haggadah of Contemporary Voices by Mishael and Noam Zion.We also have a smattering of straightforward Haggadot with minimal commentary. The only missing Haggada: a classic Maxwell House, which our family used growing up but didn’t seem to make aliya with us.With such liturgical riches, I really didn’t think we needed a new Haggada this year. That was until Rabbi Aryeh Ben David published The Ayeka Haggadah: Hearing Your Own Voice.

A veteran Jewish educator, Ben David founded the educational institute Ayeka (it means “where are you?” in Hebrew) 10 years ago to fuse the traditional cerebral approach to learning Jewish texts with what he calls a more soulful, personal experience.“The goal of learning Jewish wisdom is not solely to become a more knowledgeable or smarter person,” Ben David explains. Rather, it’s about “how to listen to Jewish texts as if they are speaking to me personally, right now,” and to “create a safe educational space for learners to feel comfortable sharing personal thoughts without feeling judged by facilitators or peers. It’s about finding one’s own voice within the symphony of the Jewish people.”Ayeka sponsors seminars for individuals, parents and teachers. I’ve participated in some of Ben David’s classes and found them deeply moving. And now Ayeka has published its first book.I asked Ben David why take on the Haggada – one of the mostly widely published Jewish texts of all time? “I felt that the conversation at the Seder was often very disjointed,” he said. “People would share random comments or stories from their Haggadot that didn’t connect with each other. Moreover, I didn’t feel like we talked personally at the Seder. All the other Haggadot have someone else’s commentary. I wanted everyone to become their own commentator.”The Ayeka Haggadah does that by interspersing, amid the traditional text, some 40 open-ended questions, specifically crafted to evoke spirited discourse. They are divided into five categories.There are 10 questions for kids and 10 questions for “everyone,” two questions for seniors, three meant to be considered in havruta pairs and 15 designed to elicit “hope.” After all, the Exodus story at the center of the Haggada is all about “overcoming impossible odds,” Ben David explains. “The Passover Seder is the antidote to hopelessness.”The Ayeka Haggadah even comes with a strict admonition that it be given out to participants one week before the Seder, with each Seder-goer instructed to prepare for at least an hour, picking out the questions they most relate to and being ready to lead a conversation.Ben David: “People often spend hours and hours preparing – shopping, cleaning, cooking – but they don’t spend much or any time getting ready emotionally or spiritually.”Last year I wrote a column for The Jerusalem Post called “A Seder for Non-Believers.” In it, I proposed using the Haggada as a loose framework to trigger discussion on “contemporary personal, political and professional concerns” rather than rote reciting the whole text.As soon as I heard about the Ayeka Haggadah I knew it would be a perfect prompt for a Blum-style Seder.We bought five copies. It was a roaring success.So, which Ayeka questions spoke to us the most at our Seder this year? Here are a few: When eating the karpas: what aspect of the natural world gives you hope? Where is the most hopeful place you have ever been? When discussing the wise child: what is one smart thing you did on your journey through life? When reciting the plagues: what has been your biggest plague in life? Have you ever been able to laugh while experiencing a difficult time? When the rabbis start upping the number of plagues: every journey has moments worthy of exaggeration. Years from now, what moments in your journey do you think you will be exaggerating? At “Dayenu”: what would be on your gratitude list for the Jewish people? While tasting the maror (bitter herbs): what are the most difficult moments in Jewish history that, looking back now, give you hope? All told, it was just what our family needed to take our already non-traditional Seder up a notch.I asked Ben David what his favorite question is.“Have you ever felt the hand of God helping you on your journey,” he said. “No one will ever directly ask you this question. Yet once it is raised, people share the most incredible stories.”We didn’t get to that one. Maybe next year in Jerusalem. ■ The author is a freelance writer who specializes in technology, start-ups and the entrepreneurs behind them. www.bluminteractivemedia.com.
Advertisement
Subscribe for our daily newsletter