In many ways, the modern Jewish world, with its incessant backand- forth between the individual and the system, has become the ultimate mixed marriage. 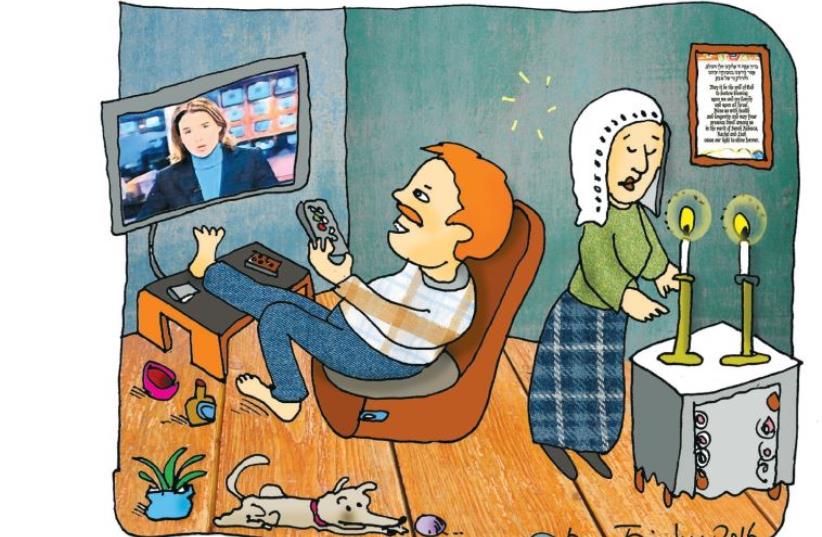 Art by Pepe Fainberg
(photo credit: PEPE FAINBERG)
Advertisement
"Can I ask your advice?” Shraga said on a sunny Shabbat afternoon a couple of weeks ago. “How do you make it work, religiously? You know, being in a mixed marriage?” I was taken aback momentarily. I had never heard my marriage described that way, although, on consideration, it was in fact accurate.For years, the expression “mixed marriage” has been wielded like an angry bird battering away at the very foundation of Diaspora Jewish continuity.In Israel these days, though, the term mixed marriage has taken on a new meaning: not two people of different religions but of different religious outlooks, where one person in the couple is observant and the other is not.Frequently, that’s not the way the couple started out.That’s been the story of my marriage.When Jody and I first met, we were both newly frum. Our love was forged on shared goals of building a religious household and raising religious children. A dozen years in, though, I began to change. Observance and belief dropped off and we found ourselves in crisis.“You’re not the man I married!” Jody cried out at one point in the early days of trying to figure out what this all meant.But figure it out we did, and that’s why Shraga had turned to me. He’s been with his wife 10 years already and has a couple of kids, but he and his partner are no longer on the same page religiously. He will discreetly start the air conditioner on Shabbat while his wife pretends to look the other way. She loves going to synagogue; he struggles to get there for kiddush.What are the keys to ensuring that a marriage like his – like mine – can survive, he needed to know.BEFORE I give you (and Shraga) my answer, I want to expand the dilemma beyond just the personal. On Shavuot this year, I attended a lecture by Dr. Elliot Malamet with the provocative title “The Torah vs Me: Judaism and the Question of the Authentic Self.”Malamet’s topic was, in many ways, my own life played out on a national, religious stage. What do you do, Malamet asked, when your sense of personal autonomy clashes with the foundations of something bigger – your marriage or, in this case, Jewish law? Can you stay within tradition? Or must you squash your authenticity to adhere to the rules and norms of the religious system?Malamet brought the example of the late Rabbi David Hartman, who once had to decide whether to marry a couple named Peter and Susan. There was a hitch. At the last moment, Peter discovered he was a kohen – a member of the priestly class – and Susan was a convert.Jewish law says the two are not allowed to marry.Hartman wrote about the dilemma in his 2011 book The God Who Hates Lies. He noted that his teacher, Rabbi Joseph Soloveitchik, faced a similar question and sided with Halacha. That couple was forced to seek happiness elsewhere.Rabbi Hartman couldn’t do that to Peter and Susan, though, and he agreed to marry them.In many ways, the modern Jewish world, with its incessant back-and-forth between the individual and the system, has become the ultimate mixed marriage.Too often, though, that’s presented as a binary either/or conundrum. When confronted with change, you have to choose: in or out. There are movements within religious tradition toward embracing more modernity – the latest ordination of seven women as Orthodox rabbis in Jerusalem earlier this month is just one example – but it’s slow by design. Move too fast, and the whole scaffolding snaps. But move too slowly and people drop out.“Nu,” Shraga demanded, impatient with my digression into issues that he didn’t see as necessarily helping with his personal puzzle. “How do you bridge the gap?” WHAT’S WORKED for my marriage, I told him, is being able to differentiate between core values and external actions. Because the latter – like everything in life – are always going to change, sometimes radically.In a marriage, for example, you might marry someone working in hi-tech earning a certain salary and used to a certain lifestyle. Then your spouse changes careers and becomes a house painter.If you get too attached to the external identity, that can precipitate a predicament.But if you know going into the marriage that many, maybe even most of the “actions” are going to change, you can identify and hold onto the personal qualities that brought you together in the first place.That’s also the case with Judaism on the national scale. The actions – specific religious behaviors, customs and Jewish law – are going to change in small and sometimes larger ways, but the core of what brings us together as a Jewish people (and I’ll let you fill in your own blanks here) remains.The only surefire guarantee to breaking up a mixed marriage of either kind is to fight change, which, while clichéd, is indeed inevitable.That doesn’t mean you can’t bend.“Learning how to compromise is essential for a healthy relationship, although you sometimes have to be very creative,” said Nomi Raz, a Jerusalem-based couples counselor. In a mixed marriage, “the one who’s more religious becomes a bit less. The one who’s less observant needs to be more tolerant.”“A big part of a relationship is spending time together, and religious activities are one way partners do this,” a friend who is in a mixed marriage told me. “It simply requires a little more resourcefulness in finding things to share.”Jody and I have been able to find a balance between self-actualization and accommodation. I hope our experience will help Shraga stay true to himself and to his marriage.Because if we can do it, then so can the Jewish world.