This Normal Life: On the fringes 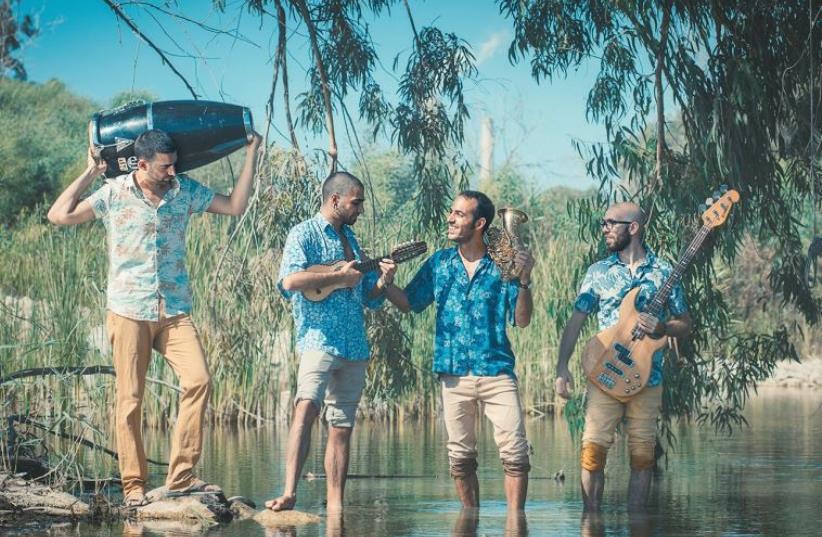 Malabi Tropical, an Israeli band with a distinct Caribbean flavor
(photo credit: Courtesy)
Advertisement
I’m probably the worst person to review the annual Jacob’s Ladder folk music festival that took place last weekend on the grounds of Kibbutz Nof Ginossar on the Sea of Galilee. I’m generally not a big fan of folk unless it’s either prefixed with “indie” or has “rock” appended afterward.As a result, I spend my time searching for music at the fringes of the festival: the indie and alternative artists that sneak in between the Irish fiddles and Americana. I am particularly interested in young Israeli musicians at the beginnings of their careers.Over the years, I’ve discovered some amazing artists who have become favorites on my iTunes playlist and, in some cases, even personal friends – not surprising given that Jacob’s Ladder, which draws up to 5,000 people, bills itself as “Israel’s friendliest festival,” and the artists often camp out with the rest of us, making them especially approachable.Jacob’s Ladder introduced me to the likes of indie darlings Lola Marsh and the two Maya’s – Isacowitz and Johanna, both of whom got their starts at the festival. (Maya Isacowitz’s first album Safe and Sound went gold in Israel.) I’ve followed the careers of Jenny Pakman and Gilad Bloom, who grew from a gentle guitar duo to a full on rock band with their Red Sun Project.Ohad Rein’s “Old Man River” brought the feel-good vibe he mastered while being mentored by Aviv Geffen on TV’s The Voice to Jacob’s Ladder last year.And I still cry when I hear Red Meadow perform “Hey Sister,” the lilting jangly guitar-driven ballad that band leader Eli Schmaltz wrote when his own younger sibling left Israel for a new life in Texas.So who were the standout Israeli indie artists for the 2016 edition of Jacob’s Ladder – the musicians you won’t want to miss when they come to a venue near you? Tamar and Netanel are a folk duo from Jerusalem who might best be described as the love child between Simon and Garfunkel and HaRav Kook (Rabbi Abraham Isaac Kook, the first Ashkenazi chief rabbi of British Mandatory Palestine).Many of their songs, nearly all of them in English, are influenced by Jewish themes. One standout (their only song in Hebrew and with a beat you can almost dance to), simply called Nigun, is based on a text written by HaRav Kook.There was no question about dancing to Malabi Tropical, the first band I’ve seen over the years at Jacob’s Ladder to rock out with a distinctly Caribbean groove. Band leader Uri Yida Shehoah, who wore a red fez and sang mostly in Spanish, formed Malabi Tropical in 2012 in Costa Rica after he met fellow Israeli Nitzan Aroshas. (Shehoah’s father is Israeli, his mother Mexican.) The two traveled around the Costa Rican countryside in Uri’s van honing their style until they decided in 2014 to relocate to Israel. The Caribbean sound met the Middle East, added some gypsy flair, and the result has been 200 shows over the last two years and a growing fan base.The biggest draw of the show for fans of quirky indie pop this year was Jane Bordeaux. The trio (there’s no one actually named Jane in the band) write original country-flavored folk and sing it in Hebrew. They made their debut last year at Jacob’s Ladder and have had several hits on Israeli radio, including the withering ukulele-led “Einav.” (“I’m not jealous, but this city is too small for the both of us.”) This year, Jane Bordeaux graduated to the main stage where an otherwise delightful performance was marred by an electrical failure during their penultimate song, forcing the band off without a proper goodbye (not to mention a much anticipated encore).The biggest discovery for me, though, was a brand new ensemble called Tsmarmorot (Hebrew for “goosebumps” or “chills”) – seven musicians from Moshav Yodfat in the Lower Galilee, formed by Jacob’s Ladder veteran Danny Sherban, two of his children – Maayan and Yuval – and several of their friends “who have married local girls and boys and become family,” Maayan told me.The band is just at the beginning of its career, playing what Maayan calls “gentle Hebrew melodic rock and roll,” and got its start entertaining the band members’ children as they “as they fell asleep around the fireplace in the cold Yodfat evenings.”The result is quite charming, and when Sherban’s fiddle blends sweetly with the cello played by the group’s “other” Maayan (Lev Cappeluto), you just might find yourself transported back to a less bombastic version of mid 1970s Electric Light Orchestra. Their song Elisha (a lullaby to band member Uria Bartov’s son) reminded me of Israeli singer-songwriter Keren Ann’s hypnotic “Not Going Anywhere.”Will Tsmarmorot be going places? I certainly hope so. But not too far – I’m looking forward to their next show at Jacob’s Ladder, along with more indie discoveries.

The author is a freelance writer who specializes in technology, startups and the entrepreneurs behind them. More at www.bluminteractivemedia.com.’
Advertisement
Subscribe for our daily newsletter